Earlier this week, Chinese EV manufacturer, Super Soco unveiled its new CT-3 maxi-scooter, at the 19th annual China International Motorcycle Trade Exhibition. Super Soco has a diverse portfolio from scooters to entry-level motorcycles, and the addition of a maxi-scooter further strengthens its line-up.

The CT-3 features a prominent fascia with twin-pod LED headlights and a short windscreen like most other maxi-scooters. The tail end is rather significant, as well, with LED taillights and turn signals that are stacked vertically. At first glance, the CT-3 resembles the BMW C 400 GT gas-powered scooter. Speaking of, Super Soco seems to have the German manufacturer’s electric scooter, the CE-04, in its crosshairs with the introduction of the CT-3.

The CT-3 also packs a decent amount of modern features that we’ve come to expect from EVs. Zigwheels has reported that the scooter features a large 7-inch TFT display that offers smartphone connectivity and reverse parking assistance. Powering the scooter is a belt-driven 18kW motor that works alongside a 7.2kWh battery pack, which takes a claimed 3 hours for a full charge (pretty quick!) Super Soco also claims that the CT-3 has a top speed of 125kmph (77.6mph) and a range of 180km (111 miles) on a full charge.

Super Soco is a joint Chinese-Australian venture and sells its products in multiple markets, including the U.S. There’s no official information about when the product will reach our shores, but a launch seems imminent. 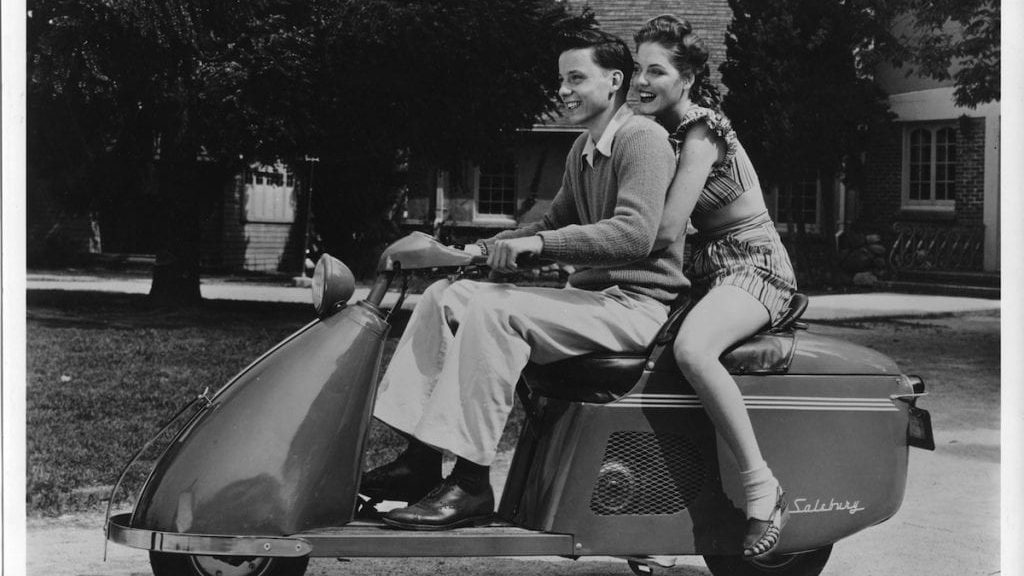 Absolute cupboard of a caboose.

The putter of perfection.

Am I kidding? Nope. Say hello to the Jetson family, folks.

BringATrailer has 3 days left on a bid for a vintage firetruck-red 1947 Model 85 scooter, and I’m digging the dynamics. What other scooter can brag gas/brake pedals, a spring-cushioned solo seat, and 1.5 cubic feet of storage capacity?

According to a report from RideApart, Salisbury started up with their scooter line in the 1930s, when post-Depression Americans were looking for a cheap commute. Amelia Earheart, female pilot, and icon of the times, was said to have served as an inspiration for Salsbury’s spiffy style.

And that’s not all. Style came with speed, even back then. The scooter’s top velocity is due to the 320cc fan-cooled, 6 hp side-valve motor and maxes out at a hair-raising 50 mph – pray you don’t hit the speed bumps the wrong way. 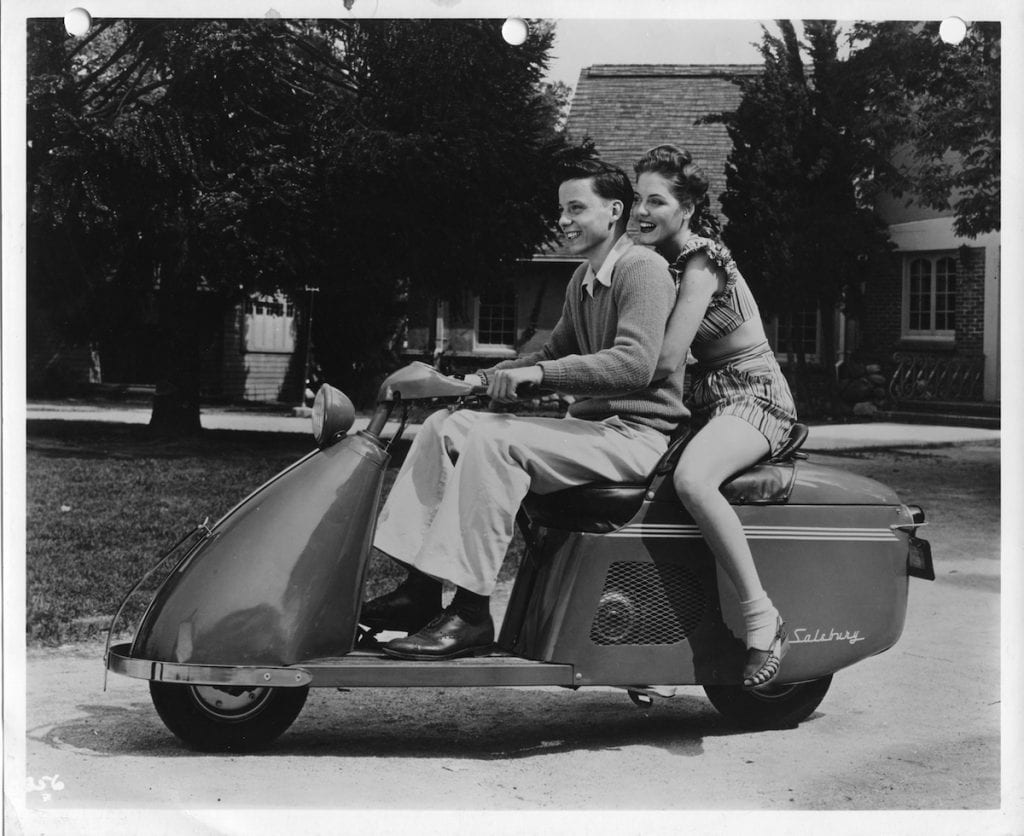 The Model 85 was acquired by its current owner in 1996 and has since been refurbished with chrome detailing, paint touch-ups, and a fine-tuned CVT – in this case, ‘CVT’ standing for ‘Constant Velocity Transmission,’ not ‘Continuously Variable Transmission,’ as is true for most modern CVTS with a hand throttle.

Additional perk: only 1000 units of this model were made, with precious few remaining in such good shape. They sold for $800 back then, so the full accounting for inflation tips the scales at a neat $9500.

It’s a bargain, and you know you want it – if only to putter about town and make your neighbors jelly.

Where the sporty Freeride E offers an 18 kW output, the new E-Pilen will produce significantly less at 8 kW. A 100 km range should prove sufficient for urban and suburban short-hop commutes.

Seemingly a battery powered alternative to the Husqvarna 125 models announced for 2021, the E-Pilen will offer less power. A modular and swappable battery system may offer increased flexibility and possibly even range if infrastructure for swapping, rather than waiting for a charge, becomes available. One would imagine that a system such as that mooted for Europe may not prove quite as economically viable in our broader Australian landscape.

Husqvarna have also signalled their intention to increase their dealer presence in urban and metro areas – most likely in Europe – to further push their E-mobility range, where they are most likely to be well received, thanks to shorter trips and greater charging infrastructure being the norm.

Information at the moment on the new model is very light, with more details said to be on the way in the near future, however it seems a smart strategy alongside the e-balance bikes to get new riders onto electric machines. Possibly in the hopes of preventing the comparison to traditional alternatives for a new generation of riders, while also capturing the interest of first adopters.

The looks of the E-Pilen certainly align well with the Svartpilen and Vitpilen models and despite the fairly low claimed output figure in comparison to what we’ve come to expect in motorcycles – even small capacity machines – has a real sporty edge.

The E-Pilen could well also be a viable option for those seeking something more than an e-bicycle, without making the jump to traditional motorcycle or scooter, and the 100 km range would cover many rider’s regular commute. We’ll have to wait and see what speeds the bike is capable of without greatly effecting that range.

It will also be interesting to see if more powerful alternatives are offered in the future, aligning with the availability of 125, 250, 401 and 701 Vitpilen and Svartpilen models.

Price is also likely to be a hot topic with this model, with the Svartpilen and Vitpilen models having seen a fairly drastic price drop from their original figures, which has since put them in a fairly competitive position in the Aussie market.

Whether the E-Pilen is an affordable alternative to a small capacity machine or ends up in a similar position to Harley’s Livewire – as a premium, fairly exclusive option –  remains to be seen. Affordability is a huge factor in this segment of the small motorcycle/scooter market.

One of the biggest obstacles for electric ADV bikes is the fact that battery technology just simply isn’t there yet. However, that might be changing and sooner than you think, according to ADV Pulse.

The publication notes that battery technology is quickly progressing. Things like pre-charged swappable batteries, which are already in some scooters and are currently being developed via an alliance between Honda, Kawasaki, Suzuki, and Yamaha, could make getting a fresh battery as easy as pulling into a battery-swapping station for fully charged battery.

Also, battery ranges continue to improve every year. Lucid Motors has a massive battery on its new car and Tesla’s future batteries are supposed to get 500 miles per charge with short charge times. At the same time battery lifespans are increasing. Tesla’s new battery is supposed to be good for up to a million miles, which will eliminate the need for most folks to replace a battery.

All of these developments will take some time to make their way to motorcycles, but they will and it will likely happen before you expect it. The new battery technology is coming. Even now, it’s pretty impressive what can be done on an electric motorcycle. A bonafide electric ADV bike has yet to be seen, but with these recent developments and what’s coming, it’s likely right around the corner.

Integrated into the rear wheel of the Seat Mo’ eScooter 125 is a 9 kW electric motor that produces a prodigious 240Nm of torque that shifts the scooter from a standstill to 50 km/h in 3.9-seconds on its way to a top speed of 95 km/h.

The battery can be charged when still in the vehicle at charging stations, but it can also be removed and plugged into a home power socket. The system is designed for extra convenience amongst fleet customers as that it allows them to simply swap batteries over to keep the vehicle on the road with minimal downtime.

Owners can also track their vehicle by smartphone for both position and status updates while a smartphone holder adds extra convenience to the cockpit.

There is enough onboard storage for two helmets in the under seat compartment and two USB ports are also available.

Demand for last mile mobility is growing enormously as cities become more crowded and the Seat Mo’ eKickScooter 65 has been built with this need in mind.

Front and rear lights, as well as a brake light and side/rear reflector increase visibility, while the front drum brake and rear electronic brake improve safety.

A fleet-specific design sees a range of up to 65 km with a 551 Wh battery pack.

It has been designed and developed to meet with the regulations in some markets and especially in Germany – one of the stricter countries in terms of eKickScooter regulations -, the Seat Mo’ eKickScooter 65 will have a maximum speed of 20 km/h.

The SEAT MÓ eKickScooter 65 offers a nominal power of 350 W, which is enough energy to for climbing angles of up to 20 degrees.

MCNews.com.au is trying to ascertain what plans Seat has for these products in relation to the Australian market, the kick scooter though is too powerful under our nanny state legislation and would need its power pegged back to meet our restrictions.

Order an Oset 24.0 Racing electric trials motorcycle drop-shipped to your door and you get this:
three cardboard boxes. One giant, one a little bigger than a car battery, another that’s a little flat, like you ordered a pair of flip-flops. Inside is everything you need to assemble a rad little ripper of a machine.

We’re here building this bike for a very specific reason—and a fairly specific person: me. Much as I love riding in the dirt, I’m terrible at it. Specifically, I’m terrible at the high-precision, slow-speed technical riding that’s exemplified by the discipline of competitive trials. And until the arrival of the Oset, there was no sign of improvement on the horizon.

Riding in the dirt is a tall order for me these days. I’m a new dad, for a start. And I live in the geographic center of Los Angeles, one of the more famously sprawling cities on the planet. So while quick escapes to pavement are numerous, loading up a truck or a van with a dirt bike and driving three hours to a decent riding OHV area is a big ask of the family. Disappearing long enough to get good at it, or practicing my dirt bike chops in my own neighborhood? Well, that’d get me shot.

But the electric motorcycle revolution might just have my back, and the Oset 24.0 Racing might, might, be a perfect tool for sorting out some of those missing skills. If you’ve seen Motorcyclist contributor Chris Northover’s gobsmacking Storm the Embassy video on YouTube, you’ll know that these little machines can take an astonishing amount of punishment, while delivering fairly spectacular performance. All at a neighborhood-friendly decibel level. That’s no small task.

So we’re trying out an Oset 24.0. It’ll be a long-term project. The machine and I, both. We’ll challenge its performance, and my skills. And we’ll have some actual talent in the form of our own Andrew Oldar, a professional dirt bike stud and trials expert, coaching and evaluating me along the way.

But first, we have a bike to build.