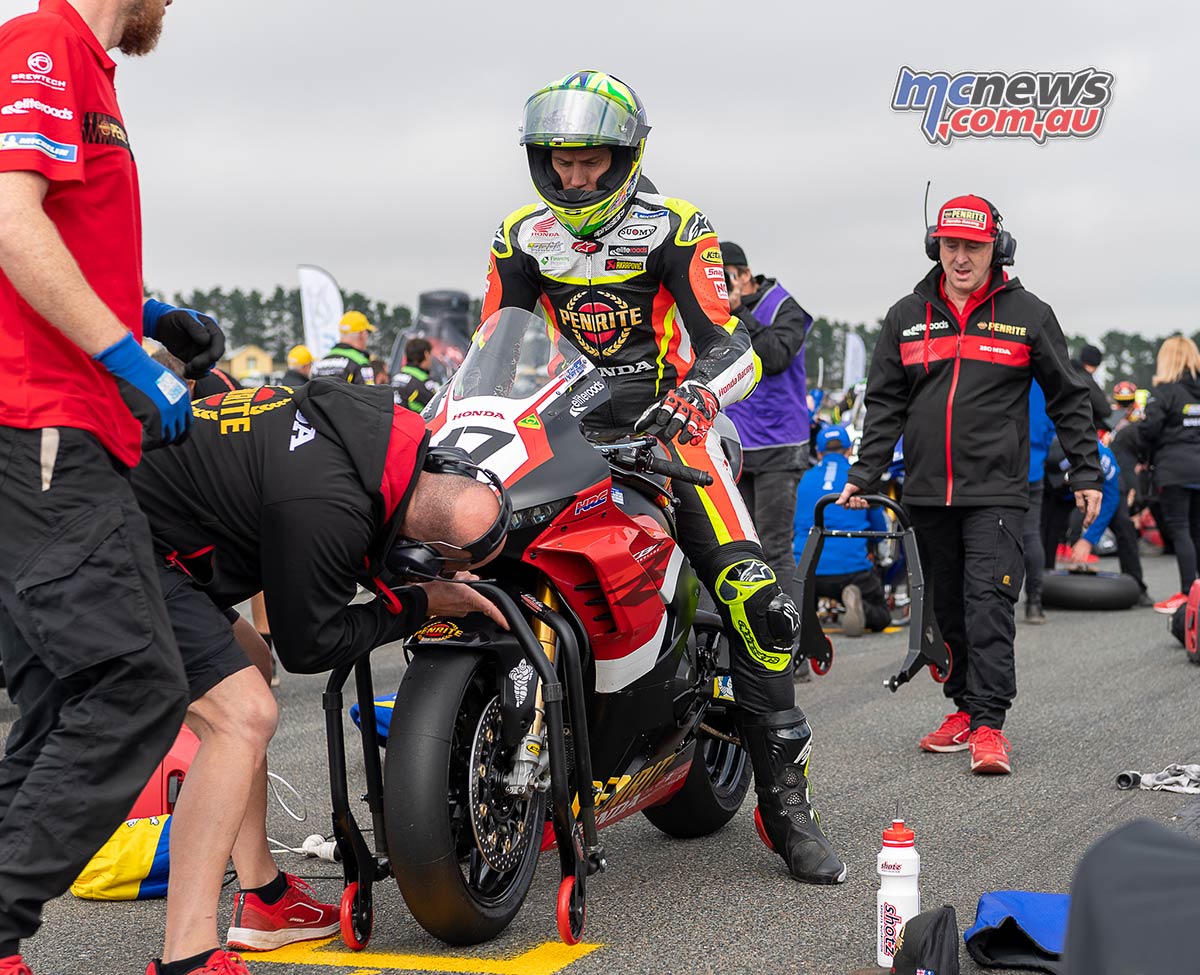 Something tells us that we could be on course for yet another showdown for a championship between Wayne Maxwell and his nemesis, but friend, Troy Herfoss… Cru Halliday though could insert himself between them and break through for his first Superbike championship. But in reality, anything could happen, and probably will!

What you see here is possibly the only example of the 1938 Matchless 250cc G2MC still in existence. Correspondence from the UK’s AJS & Matchless Club revealed that there were no G2MCs listed on either their or the Vintage Motorcycle Club’s registers, with no other examples known of.

The MC or “Clubman Special” was the competition (trials) version of a range that was produced in 250, 350 & 500cc capacities and in Base, De Luxe & Clubman Special versions.

Due to the rarity of the bike it was decided during restoration to paint the tank silver instead of risking replacing the original chrome finish.

One interesting feature is the detachable troubleshooting light, housed in the tank’s instrument panel. As this single-wire lamp required earthing to work, using it to check the fuel level possibly helps explain the rarity of this model!

King Of The Baggers

Veteran rider Frankie Garcia put his Roland Sands Design Indian Challenger on the box with a third-place finish. That made it two out of three podium positions for the Indian Challenger to kick some sand in the face of the Harley faithful.

The historic race played out in truly dramatic fashion. Barely, 24-hours after an accident where he “looped” his 272 kilogram machine during qualifying, Frankie Garcia rebounded taking the holeshot. But it was O’Hara who immediately established a commanding lead through the first three laps.

With five laps remaining, an off-track mishap sent O’Hara back to third and Garcia to second, allowing veteran rider Hayden Gillim to take the lead.

From there, O’Hara began a patient, methodical comeback, working his way past Garcia and dramatically passing Gillim while diving into the famed “Corkscrew” during the penultimate lap.

O’Hara held strong for the final lap winning the inaugural race by 1.9 seconds, earning the title “King of the Baggers.”

King of the Baggers Results

The unprepossessing MV Agusta 600 Four soon faded from the catalogue to be replaced by the 750 S which was produced from 1970 until 1975 – although only 583 were built in that time.

The S (also known as the Sport) was a marked contrast in appearance to its predecessor – an out and out sports machine (although the shaft final drive was retained). A new tank and seat were the most obvious changes from the 600.

The motor used an increased bore to achieve the 743 cc capacity and four 24 mm Dell’Orto carburettors were fitted as standard. Otherwise the engine was not much changed. Power was up to 72 hp at 9,200 rpm, while wet weight was 245 kg.

A much rarer SS version was also produced that had the output increased to 76 hp at 9,900 rpm and a full fairing. An even rarer (33 made) GT model was also offered for a couple of years (See – MV Agusta 750 GT).

The bike seen here is an S fitted with the optional full fairing.

Ugly is the word usually used to describe MV Agusta’s 600 Four! However from such undesirable seeds something universally acclaimed as beautiful grew (and is the subject of the next column).

MV finally produced a road going four cylinder motorcycle in 1967 (after the prototype was displayed at the Milan Show in 1965) after racing them since 1950. They had even shown the road going 500 cc four-cylinder R 19 prototype back in 1950!

However the 600 Four was not some racy sports model but a sedate tourer. This was a deliberate move on Count Agusta’s part to make it as hard as possible for privateer racers to convert the road bike into a race machine. Not many of the 127 produced have survived as they were fairly easily converted into the much more desirable 750 Sport.

While originally fitted with a pair of 24 mm Dell’Orto carburettors, four were an option on later production bikes. The disc brakes were mechanically operated. Power was 50 hp at 8,200 rpm, with a wet weight of 221kg. A top speed of 175 km/h was possible.

This machine was the original US press bike and was bought by a doctor in California who kept it for 40 years without riding it – before being obtained by the current owner and moved to New Zealand, where it is ridden regularly. It is in original condition.

While Rumi is best known for its 125cc horizontal parallel twin 2-strokes (Check out – 1954 Rumi Formichino), the company did dabble with several 4-stroke prototypes.

The first was designed in 1952 by Giuseppe Salmaggi and featured a DOHC 250 cc parallel twin with the cylinders inclined at 27º from the vertical and a shaft final drive. This was followed by a second Salmaggi design, a 125 cc single with a shaft bevel drive to the DOHC head.

Finally, in late 1954, Felice Rolla (a well known race mechanic/tuner) revealed a 125 cc DOHC design based on the familiar 2-stroke race motor. A cascade of gears drove the camshafts and the motor was fitted into a Series 2 Compitizione chassis.

The bike was displayed on the Rumi stand at the Cycle and Motorcycle Exhibition and while an “outside” project, it is probable that Rumi had some input into its development.

The bike seen here is number 2 of several prototypes made. Some had a dry sump design (as this bike has), others were wet sump.

Josh Brookes has celebrated his second Bennetts British Superbike Championship last weekend after a title-deciding triple-header on the Brands Hatch Grand Prix circuit. His performance at the finale gave him a final 21-point advantage over closest rival Jason O’Halloran to seal the crown. The images below are all from that final round and taken by our contracted BSB photographer Dave Yeomans.  Enjoy!

Originally established in 1874 as a bicycle manufacturer, Excelsior started to produce motorcycles in 1896 – ceasing in 1965. The Monarch scooter was introduced in 1959 and was a rebadged DKR (also a British company, that used a Villiers motor in their Dove scooter) fitted with an Excelsior 147cc 2-stroke.

In 1960 the MkII model, seen here, was launched. It featured new bodywork, all in fibreglass, and 10-inch quickly detachable wheels. The same 147cc motor and three-speed Albion gearbox were used. This is an original unrestored example.

First announced by Edward Turner in 1958 the Triumph Tigress/BSA Sunbeam didn’t enter production for over 12 months, in late 1959. Uniquely the scooters were available with two completely different engine types – a BSA Bantam derived 175cc 2-stroke single or a newly designed 250cc 4-stroke twin. Both were fan-cooled.

The 250 used a gear driven gearbox rather than the 175’s chain. Both types used a chain final drive. Some 250s were fitted with a 12v electrical system and starter. The 250 was the more successful version and had a top speed of 105 km/h. However build quality proved to be a problem. It was discontinued in 1964 with the 175 following the next year. The example seen here is a Sunbeam B2 250 twin.

The Cezeta scooter was built by CZ from 1957 until 1964 in what was then Czechoslovakia. The long (over 2m) torpedo shaped body had a large luggage compartment under the seat, while the fuel tank was positioned above the front wheel behind the headlight.

On the original 501 model (1957-59) the rear wheel was supported on one side only and suspended from a rubber block. The 502 model employed a swingarm and dual shock absorbers. A CZ 175cc 2-stroke motor with a belt-driven fan was used. The Druzeta sidecar was available as a factory fitment, with about 900 produced.

Strangely a New Zealand assembled version of the Cezeta, the N-Zeta, was built for a few years around 1960 using a 200cc motor. And interestingly in June 2013 the Cezeta 506 Lithium battery powered scooter entered production, retaining much of the originals styling.

The prototype Innocenti 98 motorcycle from 1970. It was developed in conjunction with Motom.

The 125cc FB was the first three-wheeler made by Lambretta. It was only produced from February 1949 to March 1950 with 2,001 built. It was followed by the FC, still with the single wheel behind the rider.

It wasn’t until the FD model, seen here, that the far more stable conventional tricycle wheel arrangement appeared. 4,841 were built during 1952-53.

The Velocette Viceroy was introduced in 1960 and was quite an innovative design. A 247 cc flat twin 2-stroke motor was mounted just behind the front wheel with the rear-mounted clutch and 4-speed transmission driven by a prop shaft for optimum weight distribution. The fuel tank was mounted under the leg shield.

An electric starter and 12V power (via two 6v batteries wired in series, located under the seat), as well as a large windscreen were standard fitment. The frame was comprised of a single large diameter tube that ran from the headstock back to the seat. Production ceased in in 1964. Power was 15 hp with a weight of 137 kg. Cruising speed was 105 km/h.

Originally produced from 1949 by Dr. Balbaschewski in Reutlingen, Germany, the Walba Deluxe was the most significant of a range of scooters. It had several advanced features including identical front and rear suspension and the an engine/transmission unit that moved in opposition to the rear wheel (eg. when the wheel moved up the engine unit moved downwards) that provided a 50/50 weight distribution and excellent handling.

The brakes were hydraulic and a jet engine intake was a futuristic styling touch. An ILO 197cc 2-stroke motor was used. The Walba company was sold in 1952 but the scooters continued to be produced under the Faka name. This is an original condition 1954 Tourist model, with power at 9.6 hp, good for a top speed of 93 km/h.

The Maico Mobile touring scooter was produced from 1950 until 1958 and marketed as a “car on two wheels”. A tubular steel space frame was clad with steel and alloy panels, which at the rear, incorporated built in panniers. Suspension was via telescopic hydraulic forks and swingarm. The large dashboard had a glovebox and provision for a car radio!

KTM’s first scooter was the Mecky. In 1962 the Ponny was released. It had cast alloy 12 inch wheels and dispensed with the Mecky’s pedals. A Sachs 50cc 2-stroke motor was fitted. The metallic paint and stylised rear rack are noteworthy. This Ponny De Luxe came from the KTM museum and is in original condition.

In 1955 the Austrian Lonher company expanded its range with the L 125. Powered by either a Sachs or Rotax 125 cc 2-stroke motor, the design was characterised by the large compartment built into the front leg shield. Power was 5.5 hp, with a top speed of 85 km/h.

Established in Pilsting, Germany in 1895 by Andreas Glas as a repair shop for steam-powered agricultural machinery, the enterprise expanded to Dingolfing in 1905.

It was here that the company began to manufacture Goggo scooters in 1951. Over 46,000 were built before production ceased in 1956 and construction of the famous Goggomobile cars commenced.