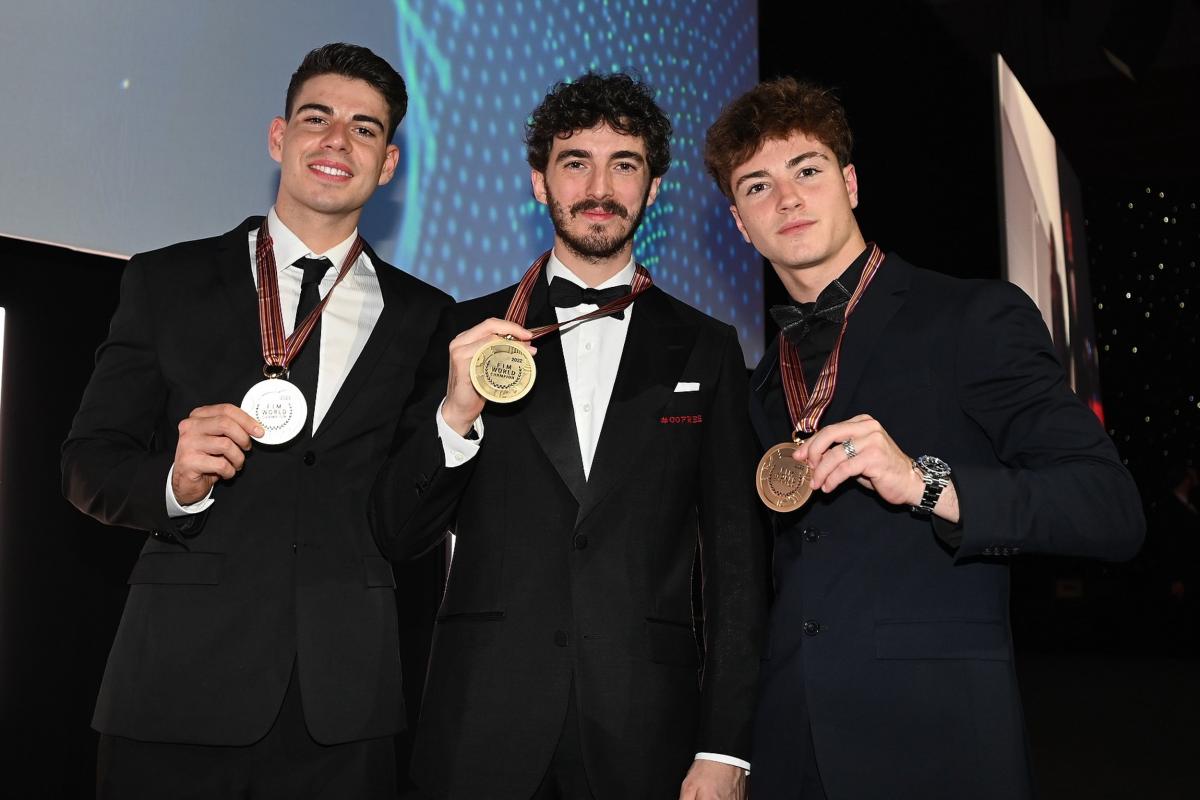 Others present included 2022 MOTUL FIM Superbike World Champion Alvaro Bautista as he celebrated his WorldSBK title and represented another Ducati success, as well as 2022 Finetwork FIM JuniorGP™ Champion Jose Antonio Rueda. Rueda made history as the first rider to take that crown and win the Red Bull MotoGP Rookies Cup in 2022, and he’ll move into the Moto3™ World Championship next year.

How cool is this design. Who thinks Kawasaki should add this to their colour options for 2023?

Jonathan Rea statements after Jerez Winter Test: “It has been a very worthwhile test because we had to make decisions on some ‘hard’ parts for the off season, so that we can start in a good way next year. We just had three or four of these important items to say yes or no on. Riding the 2023 bike is good. There are some areas we need to improve, because we are still doing the early work, especially from the electronics side. But step-by-step we will put the package together. The track was never in perfect shape as there were still some damp patches out there but we were able to make some decisions. I am happy to go into the off season healthy and happy. I look forward to a few weeks holiday now.”
Source: Jonathan Rea On Facebook

Take in the views and vistas of your ride without having to squint in the sunlight with the Highway 21 Winslo Sunglasses. Crafted specifically for motorcycle riders, the Winslo sunglasses feature rugged polycarbonate lenses to deflect road hazards, as well as oleophobic, hydrophobic, and flash mirror coatings to keep the lenses clear.

With a clean and simple design, Winslo sunglasses combine safety and style so riders can see clearer while looking cooler.

Select models feature polarized lenses for an added level of eye protection. The Highway 21 Winslo Sunglasses are available in Black for $59.95.

Got to ride my 2023 bike today. Even the track wasn’t perfect we have been able start working for next season. Thanks to all my team for the big effort. Now some holidays for me!
.
📸 @geebeeimages
.
@krt_worldsbk @alpinestars @araieu @monsterenergy @medallia_inc  @showaperformance @vitusbikes @oakleymotorsports @insidebikes #team65

🇪🇸 vs 🇯🇵. Katsu had bragging rights this morning!

The world’s most prolific motojournalist and MO contributor, Alan Cathcart’s latest book is out, and just in time for the holidays! Entitled Ducati Superbike 1988-2001, as the name suggests, this one covers the history of the Ducati factory’s Superbike racers during the desmoquattro era, when the new generation testastretta engine was introduced – from a hands-on perspective:

I was fortunate to be the only journalist in the world to have track tested all but two of the factory Ducati desmo V-twin Superbikes, writes Sir Al, which participated in the Superbike World Championship down the years from its foundation in 1988 up to 2015. This book is a compendium of such tests covering the years in the title.

My assessments of each bike frequently include the crucial insight of the men who raced them for the Italian factory, including Carl Fogarty, Troy Corser, Doug Polen, Giancarlo Falappa and Troy Bayliss. And not to be overlooked are the book’s exclusive photos, which show these historic Ducati factory racers both with and without bodywork, allowing Superbike race fans to admire the invariably previously hidden secrets of these wonderful bikes.

Ducati Superbike 1988-2001 is available in a limited edition of 996 copies (of course!) as a large-format 11.8 x 9 inches (30 x 23 cm) hardcover volume printed on quality paper, with 160 pages and 91 full page photos. It costs €35.00 (US$36.73 today) plus shipping, anywhere in the world. The book is only available via mail order to be sent duty-free anywhere in the world; books are generally not subject to import tax in any country.

The book has been published in two languages, English and Italian, by Cathcart’s colleagues at FBA Moto Italiane in Firenze, Italy, and full details and sample pages are available at their website here.

Become a Motorcycle.com insider. Get the latest motorcycle news first by subscribing to our newsletter here.

Our guest on Episode 50 of the Rider Magazine Insider Podcast is Dave Scott, who completed a solo journey on the TransAmerica Trail. This is Part 3 of a three-part interview. We spoke to Scott in Episodes 46 and 48, where he told us about the challenges of riding the TAT during the Covid-19 pandemic, dealing with hurricanes and Mississippi mud, and then crashing on Imogene Pass in Colorado, where he broke his leg. Scott spent the winter and spring healing up, and in the summer of 2021, he returned to the TransAmerica Trail. After conquering Imogene Pass, he rode through Utah, Wyoming, Idaho, and Oregon, where he finally made it to the end of the trail and dipped his tires in the Pacific Ocean. This is another unfiltered, uncensored conversation about the trials and tribulations of riding solo across America on a dirtbike. Look for Part 1 of Scott’s story in the adventure-themed November 2022 issue of Rider and on our website here, with Part 2 coming soon in 2023.

You can listen to Episode 50 on iTunes, Spotify, and SoundCloud, or via the Rider Magazine Insider Podcast webpage. Please subscribe, leave us a 5-star rating, and tell your friends! Scroll down for a list of previous episodes.

Rear brakes aren’t a hot topic in today’s motoverse, nor are they necessarily among the most sought-after motorcycle tips. In fact, they’re kind of boring when the front binders on modern bikes provide so much stopping power, often with a single finger on the lever, but they’re still important.

According to the Motorcycle Safety Foundation, front brakes provide approximately 70% of a motorcycle’s maximal stopping power, leaving around 30% to the single rear brake. But many factors affect this ratio, such as speed, tire grip, road surface, road gradient, and type of motorcycle. Cruisers and touring bikes with long wheelbases benefit from rear braking to a greater degree than short-wheelbase motorcycles like sportbikes.

Hard braking at the front can lighten the rear end so much that it can be hard to take advantage of whatever percentage of braking is available back there. That’s a lesson I hadn’t learned yet when my ’83 Suzuki GS750ES, which had some serious stoppers, was new.

My enlightenment came later with my ’87 Kawasaki KLR650, a venerable dual-sport notable for its large gas tank and weak single-disc stoppers at both ends. Having to use both binders to effect a short stop was a (not quite) crash course in rear brake use. Only then did I realize that doing so also attenuated dive and recoil from the KLR’s long-travel front suspension, keeping the bike closer to level throughout the stop.

This “Aha!” moment was a breakthrough in both stopping and overall control. Riding my Honda VFR750F at CLASS, Reg Pridmore’s track-based safety course, only reinforced that lesson. I wasn’t the fastest or the smoothest student rider, but when it came to the braking exercise – which required using both brakes – 19 years aboard KLRs had me stopping like a pro.

To prove the value of the rear brake to yourself, practice emergency stops (full braking power but without locking either wheel or engaging the ABS) with only the front brake, and then with both. When both brakes are applied, the bike should squat, pitching less at the front. The longer your front suspension travel, the bigger difference it makes. (On Telelever-equipped BMWs and other motorcycles with suspension systems that minimize front-end dive, the change in chassis pitch will be less noticeable.) The same technique but with a lighter touch on both brakes will give you more secure stops on loose or slippery surfaces.

We’ve all missed a turnoff, forcing us to make a U-turn to get back on course. Performing one without putting a foot down – or worse, having to stop, back up, and take another stab at it – is a skill we should all master. I learned better technique doing test bike photoshoots for Rider, which require numerous U-turns, often on narrow roads, to get the right shot.

The key is to apply light pressure to the rear brake through the turn. The benefits are two-fold: shortening your bike’s turning radius and damping any unintended throttle inputs.

Practice in a parking lot, gradually reducing the number of parking spaces it takes to turn around. Just remember that it’s a light touch on the rear stopper; too much and you risk a fall. Keep your eyes up and look where you want to go, and keep the clutch in the friction zone for delicate power control. Also, keeping your feet on the pegs and weighting the outside peg yields the best results.

With practice, using the rear brake at slow speeds makes your U-turns steadier, faster, and safer.

You’re pulling out of a driveway, front wheel cocked, when a car appears from behind parked vehicles. While still on the driveway apron, you tap the front brake, which immediately pitches the bike in the direction of the turn. Quick thinking and a strong leg may keep it upright.

Next time, try using the rear brake as you reach the driveway apron. If you have to stop, use only the rear brake, which won’t make the bike pitch sideways since the rear wheel doesn’t affect steering or balance. The safest way to prove this to yourself is on a bicycle, where mistakes have milder consequences. Move up to a motorcycle when you’re confident with the technique.

By using these tips, the back brake may become your new best friend.