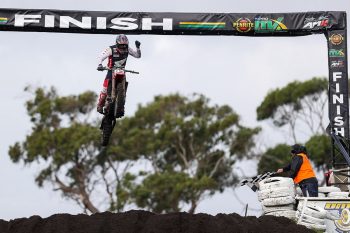 Delcon Civil Honda Racing’s Kyle Webster performed a clean sweep of the MX2 field at the opening round of the 2021 Penrite ProMX Championship at Wonthaggi, Vic.

Husqvarna racer Dylan Wills claimed the holeshot of the opening MX2 race, but Alex Larwood (WBR Yamaha Bulk Nutrients Racing) and Webster quickly got past on the opening lap.

Two laps later Webster swung past Larwood and the pair set sail from the rest of the pack. Privateer Jai Constantinou (Husqvarna)held down third ahead of Yamalube Yamaha Racing pair Rhys Budd and Jay Wilson, before coming unstuck at the midway point as conditions deteriorated quickly in the rain.

Serco Yamaha teammates Jesse Dobson and Nathan Crawford overcame bad starts and worked their way up the field, passing Wilson as the laps wound down.

Webster quickly leapt to the front of the second MX2 moto and wasn’t headed for the entire race, capping of a clean sweep for the Honda racer at Wonthaggi.

Jai Constantinou started strongly and held down second place for the opening laps, before succumbing to a hard-charging Crawford and Dobson.

Larwood, who experienced an average start, fought through the pack to make a late pass on Dobson for third place, and a hard-fought second overall on the day.

Constantinou held on strongly for fifth, as Wilson and Budd traded places multiple times through the race in their battle for sixth, before Budd got the upper hand on his team-mate. 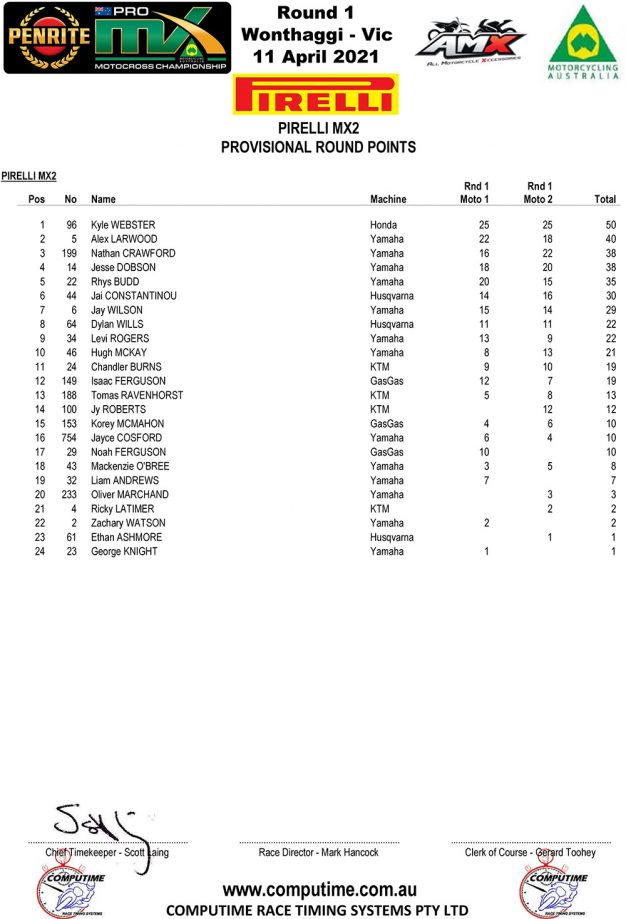