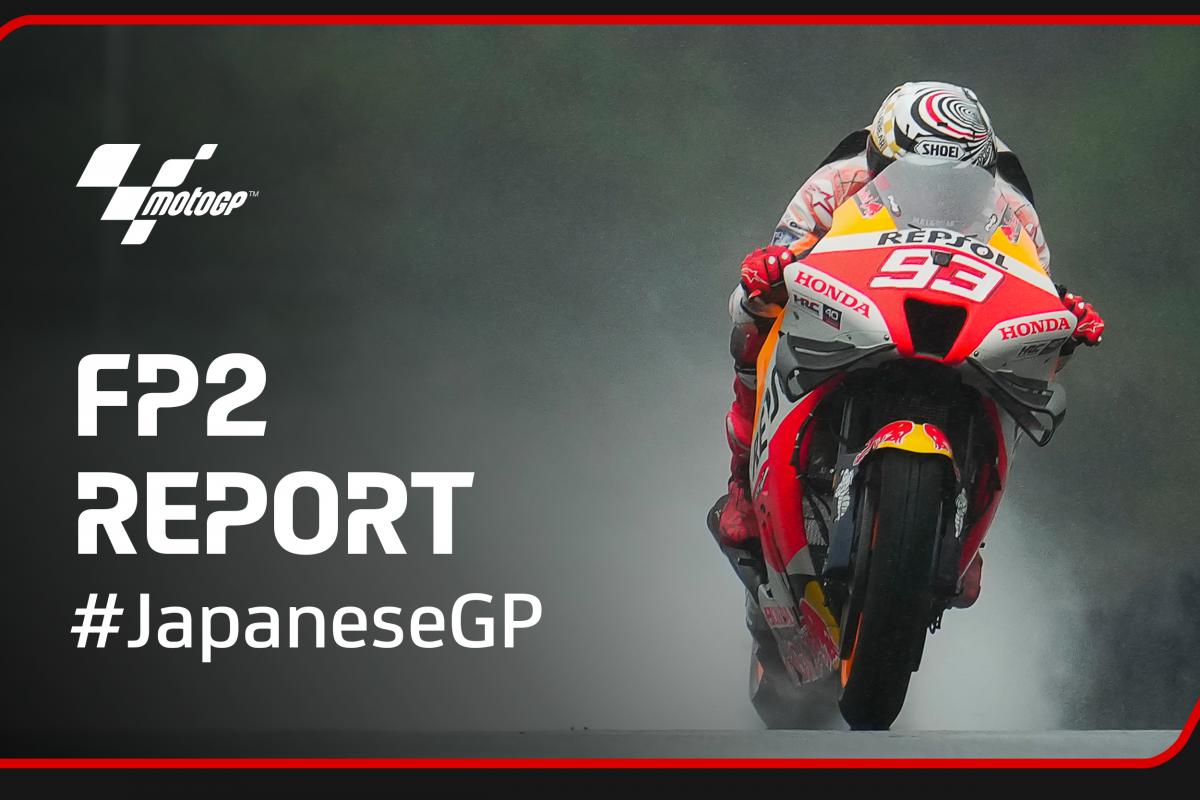 He’s still got it! The Repsol Honda Team’s Marc Marquez set the fastest lap in a wet MotoGP™ FP2 at the Motul Grand Prix of Japan, his second round back after a June arm operation. Having already secured a berth in Q2 based on his FP1 exploits, Marquez proved that he will be a genuine threat for pole position by clocking a 1:55.232 around the Mobility Resort Motegi on Saturday morning. Jorge Martin (Prima Pramac Racing) claimed second for the session while third went to Friday fast man Jack Miller (Ducati Lenovo Team). With rain falling throughout FP2, the starting order for Q1 remains unchanged.

After going sixth-fastest in a dry opening Free Practice session on Friday afternoon, Marc Marquez was on the pace almost immediately as rain fell on the circuit which Honda owns. His fastest lap would come in the 20th minute of the session, before there was a mishap for teammate Pol Espargaro when #44 was flicked off his RC213V due to a highside through Turn 8, also known as the ‘S Curve’. While Espargaro showed signs of soreness in his right wrist a red flag was called in order to remove his bike from the race line and clean up the mud which had been dragged onto the track surface as a result. Thankfully, Espargaro was back out on his second bike at the end of the session and would claim 19th with a 1:57.003 on his final lap.

Martin will have to advance from Q1 if he is to vie for pole position this afternoon at Motegi, but the signs are good after he set as 1:55.376 midway through FP2. Fellow Ducati rider ‘Thriller’ Miller showed his class in wet weather conditions with a 1:55.387, with the top five rounded out by Miguel Oliveira (Red Bull KTM Factory Racing) on a 1:55.428 and Johann Zarco (Prima Pramac Racing) on a 1:55.630. Intriguingly, Zarco and the rest of the FP2 top eight – Franco Morbidelli (Monster Energy Yamaha MotoGP™), Enea Bastianini (Gresini Racing MotoGP™), and Alex Marquez (LCR Honda Castrol) – are also going into Q1, suggesting it will be a hotly contested battle for the other two berths in Q2.

Turn 3 was a hotspot for drama, particularly in the opening minutes of the session, when it seemed like more riders were going through the Long Lap Penalty loop or the gravel trap than the race track proper! Quartararo and Aleix Espargaro were off twice each, Bagnaia and Marc Marquez ran well wide, and then Zarco was off too. They all stayed upright although Brad Binder (Red Bull KTM Factory Racing) did have a crash there just before the half-hour mark – rider okay.

It’s looking like wet Michelin tyres for the rest of the day. Riders get another chance to get acquainted with the rain in FP3 – tune in from 14:25 (GMT +9)!