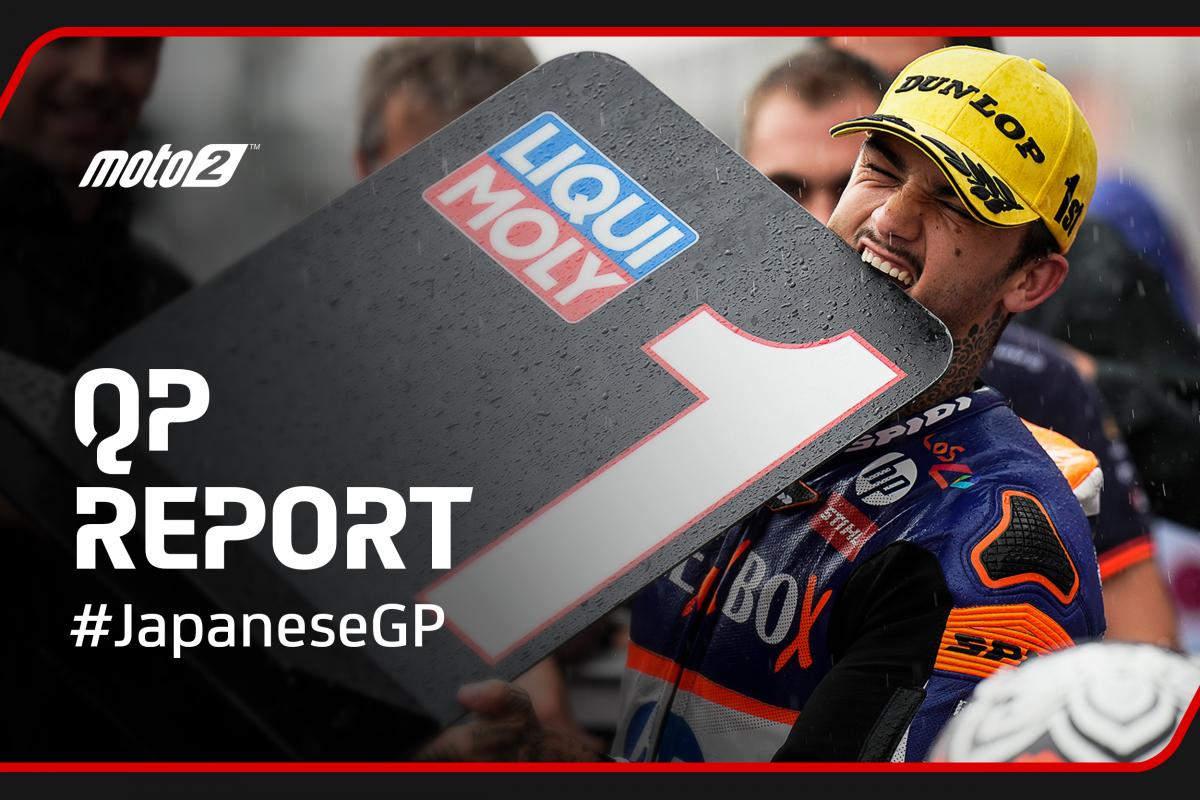 Good things come to those who wait, and Aron Canet (Flexbox HP40) had to wait a very long time to claim pole position for the Moto2™ race at the Motul Grand Prix of Japan. Heavy rain hammered the Mobility Resort Motegi minutes into Q2 for the intermediate class, leading to a delay of more than 90 minutes before the field was let loose again. Despite having to reacclimatise to the conditions all over again, Canet charged to a 2:04.939 to secure top spot on the grid by a margin of 0.333 seconds, with Fermin Aldeguer (Beta Tools Speed Up) and Jake Dixon (Shimoku GASGAS Aspar team) joining him on the front row. The top two in the World Championship, however, are much further back.

Canet had dropped into Q1 but topped that earlier, 15-minute stanza to book his place in the fight for pole position. Given the changeable weather at Motegi, there was talk that going the long way around in qualifying might be an advantage due to track knowledge. A great theory, but there was no chance to really test it when Race Control opted to red flag Q2 after just over five minutes in response to pouring rain, as well as thunder and lightning in the vicinity.

When pit lane eventually did open again, Canet was immediately on it, lapping each time at anywhere from a few tenths of a second to more than half a second quicker than the rest. As the rain started to ease off, he laid down a 2:04.939 just before the chequered flag, snatching top spot back from Aldeguer after the Boscoscuro pilot had clocked a 2:05.272. Aldeguer then saw that lap time scratched when it was thought that he set it while transiting a yellow flag zone, but it would later be reinstated and the 17-year-old Spaniard therefore handed back his place on the middle of the front row. Dixon was ultimately classified third courtesy of his 2:05.669.

Row 2 will be Tony Arbolino (Elf Marc VDS Racing Team, who clocked a 2:05.891 with the chequered flag out, from Somkiat Chantra (Idemitsu Honda Team Asia) and Filip Salac (Gresini Racing Moto2™), with Row 3 made up of Jorge Navarro (Flexbox HP40), Cameron Beaubier (American Racing), and Keminth Kubo (Yamaha VR46 Master Camp Team), and the top 10 rounded out by Barry Baltus (RW Racing GP). We have to go all the way back to the middle of Row 4 to find World Championship leader Augusto Fernandez (Red Bull KTM Ajo), who went as quick as a 2:07.348, and Ai Ogura (Idemitsu Honda Team Asia) is 13th on a 2:07.697.

They are split on the timesheet by Alonso Lopez (Beta Tools Speed Up), who was one of three to crash in Q2 – the others being Albert Arenas (Shimoku GASGAS Aspar Team) and, late in the piece, Navarro. Joe Roberts (Italtrans Racing Team) Qualified 14th, ahead of Bo Bendsneyder (Pertamina Mandalika SAG Team), Zonta van den Goorbergh (RW Racing GP), Arenas, and Pedro Acosta (Red Bull KTM Ajo).

Chopping and changing at the end of Q1

Back in Q1, plenty put their hand up for a spot in the top four only to be bumped back out right at the end. Marcel Schrötter (Liqui Moly Intact GP) was in when the chequered flag came out, then out when Taiga Hada (Pertamina Mandalika SAG Team) got in, only for Hada to be left vulnerable when Kubo improved to third. He was out altogether when Lorenzo Dalla Porta (Italtrans Racing Team) grabbed fourth, but then the Italian was himself ousted when Beaubier took fourth with a very late flying lap. As such, Dalla Porta is set to start from 23rd, ahead of Hada, Schrötter, and former Championship leader Celestino Vietti (Mooney VR46 Racing Team), who had also been in the Q1 top four in the final few minutes.

Sam Lowes (Elf Marc VDS Racing Team) missed out on a chance to progress after being thrown over his handlebars exiting Turn 4. He is set to start from 28th and looked more frustrated than hurt in what is his first round back from injury. Others to take a tumble in Q1 were Niccolo Antonelli (Mooney VR46 Racing Team) and Jeremy Alcoba (Liqui Moly Intact GP), who qualified 30th and 33rd respectively. Manuel Gonzalez (Yamaha VR46 Master Camp Team) did not start the session given he is in hospital for checks on his right shoulder and neck after a crash during the morning in FP2.