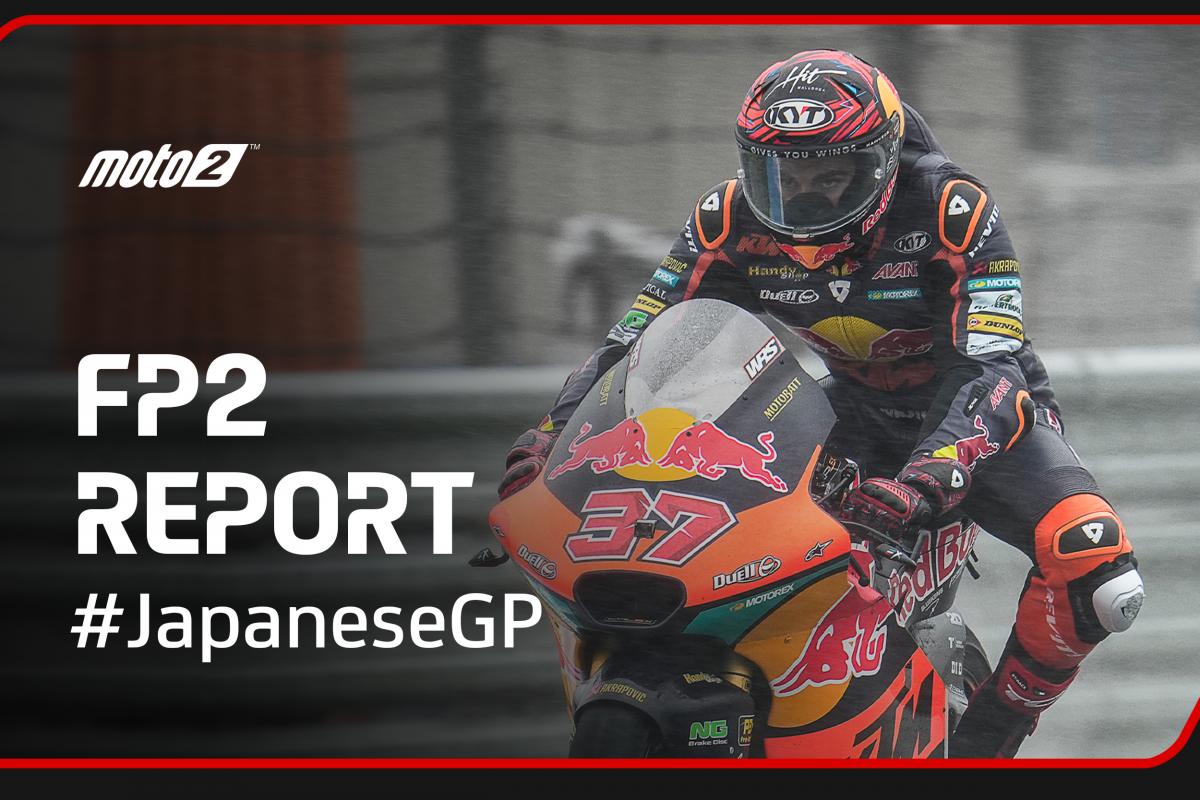 Moto2™ World Championship leader Augusto Fernandez (Red Bull KTM Ajo) is still the pace-setter at the Motul Grand Prix of Japan but it was Fermin Aldeguer (Beta Tools Speed Up) who set the fastest lap of a rainy FP2 session. Unsurprisingly, there was no change to the overall top 14 which decides the initial bunch of riders going into Q2 on Saturday afternoon at the Mobility Resort Motegi, but Aldeguer showed good speed in the wet as he went as quick as a 2:04.479 in the morning’s 40-minute session. Tony Arbolino (Elf Marc VDS Racing Team) claimed second and Aron Canet (Flexbox HP40) third, while Fernandez was classified ninth.

The intermediate class looked like it might get something of a break from the rain which had been falling over Motegi, but the skies opened again just minutes into FP2. Filip Salac (Gresini Racing Moto2™) was quickest on a 2:05.776 when the action was paused for a red flag, then improved to a 2:05.268. Despite the rain getting heavier, Arbolino moved the benchmark to a 2:04.747 with just over 10 minutes remaining, before Aldeguer clocked what would be the very fastest lap of the session with about five minutes to go. It’s a good sign for the 17-year-old Spaniard, who had effectively already booked his place in Q2 due to his exploits in FP1, as had Arbolino.

Fastest in FP2 of those who will have to go into Q1 this afternoon was Canet in third on a 2:04.899, with Salac classified fourth on a 2:04.917 which he set just before a crash at Turn 3 that brought a slightly premature end to his morning. Shimoku GASGAS Aspar Team duo Jake Dixon and Albert Arenas claimed fifth and sixth respectively, from Alonso Lopez (Beta Tools Speed Up), Somkiat Chantra (Idemitsu Honda Team Asia), Fernandez on a 2:05.333, and Jorge Navarro (Flexbox HP40).

There was a brief red flag period after a dozen minutes of action in order to clear Manuel Gonzalez’s Yamaha VR46 Master Camp Team entry off the exit of the race track at Turn 6. Gonzalez himself was thankfully conscious and walking despite what had been a dramatic highside, but is paying a visit to the medical centre for a check-up after feeling pain in his right collarbone, shoulder and hand. Others to have spills during the session were Jeremy Alcoba (Liqui Moly Intact GP) at Turn 5, Joe Roberts (Italtrans Racing Team) at Turn 3, Zonta van den Goorbergh (RW Racing GP) at Turn 5, Keminth Kubo (Yamaha VR46 Master Camp Team) at Turn 4, and Ai Ogura (Idemitsu Honda Team Asia) at Turn 8. The latter’s was a highside but, thankfully, the World Championship contender was quickly up on his feet. Meanwhile, Acosta had a big save at Turn 3 in the final minutes of the session.

The rain looks like it has set in, and that will keep riders on their toes in qualifying! Q1 starts later on Saturday at 13:30 (GMT +9).