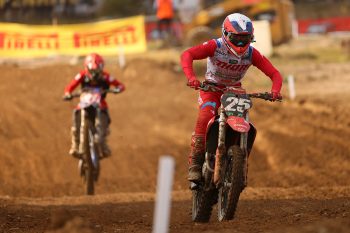 GasGas racer Blake Fox has taken over the Maxxis MX3 championship lead with a decisive 1-1 performance at the second round of the 2021 Penrite ProMX Championship at Canberra, ACT.

Fox held a lead from start to the finish in the opening race, as he held off Ben Novak (Honda) and Thynan Kean (Honda) to win by 11 seconds.

Jack Mather crossed the line in fourth, ahead of former series leader Ryder Kingsford (Yamaha), who experienced two separate crashes on his way to a fifth place race result.

In the second MX3 outing, Kingsford grabbed the holeshot and looked to capitalise as Fox dropped his bike on the opening lap.

Fox quickly worked his way back into contention and passed Kingsford for the lead, eventually finishing with a three-second lead over the Yamaha rider, with Novak finishing in third. Connor Towill (KTM) and Seth Burchell (Yamaha) completed the top five.

Fox’s performance saw him finish the day on top of the box and with the championship-leading red plate, while Novak and Kingsford rounded out the podium. Jack Mather (Husqvarna) and Kean completed the top five for the day.

In the bLU cRU YZ65 Cup, Heath Davy won the day on countback from Peter Wolfe, with the two youngsters trading wins and runner-up positions in the support class.

Paddy Lewis finished third overall on the day with a 3-4 result, ahead of Dejan Sankovic (5-3) and Cooper Bowman (4-6).

The third round of the 2021 Penrite ProMX Championship will be held at Gillman, SA on May 30.