Australians impress in the opening round of Pro Motocross championship. 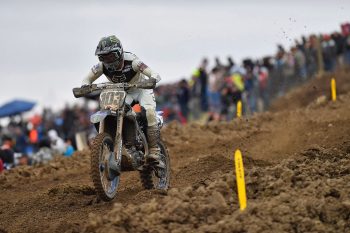 Australian champion Dean Ferris is content with his solid top 10 result at the opening round of the 2019 Lucas Oil Pro Motocross Championship, scoring ninth overall at Hangtown.

Ferris, called in to replace Monster Energy Yamaha regular Aaron Plessinger, gradually improved at round one to record 11-9 finishes in challenging conditions.

His opening moto forced him to make his way through the pack after a top 15 start, but managed to get up to 11th. Conditions in moto two deteriorated, however, Ferris was able to get a decent start in the top 10 and went to work, making it up to eighth.

“I’d say the day started really slow, but we reverted back a bit to what we knew,” Ferris commented. “I messed up my start a little in the first moto and had to come through the pack – toward the end I found my pace.

“I had a better start in the second moto but it was chaotic with the mud and rain. The track was treacherous with the rain, but I think eighth was where I should have been today. I’m sure round by round we’ll keep improving.”

Ferris led what was a promising opening round for the Australians, with fellow 450MX rider Todd Waters riding his Husqvarna to 12th overall. In 250MX, Geico Honda’s Hunter Lawrence was P11, one place ahead of current Australian champion Wilson Todd (KTM).