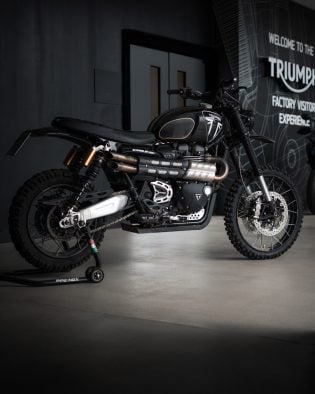 A Triumph Scrambler 1200 XE stunt bike, used in the filming of No Time To Die has sold for £138,600 GBP ($154,317 USD) benefitting the Severn Hospice in a charity auction at Christie’s to celebrate 60 years of James Bond films.

Paul Edmonson said, “Riding the Scrambler in No Time To Die was a privilege and certainly brought a smile to my face every time I rode it”.

Martin Craven added: “It’s an incredible beast, the Scrambler did everything we threw at it. We raced it to an inch of its life”.

The proceeds raised from the auction of the Scrambler 1200 XE will go to the independent charity Severn Hospice, which gives specialist care and support free of charge to families across Shropshire, Telford & Wrekin and Mid Wales who are living with an incurable illness.

The live auction featured 25 lots comprising vehicles, watches, costumes and props many of which related to the 25th Bond film, No Time To Die, with the final six lots offered representing each of the six actors who have played Bond. An online sale featuring 35 lots spanning the 25 films, continues until James Bond Day on October 5th, 2022 – the 60th anniversary of the world premiere of the first James Bond film Dr. No in 1962.