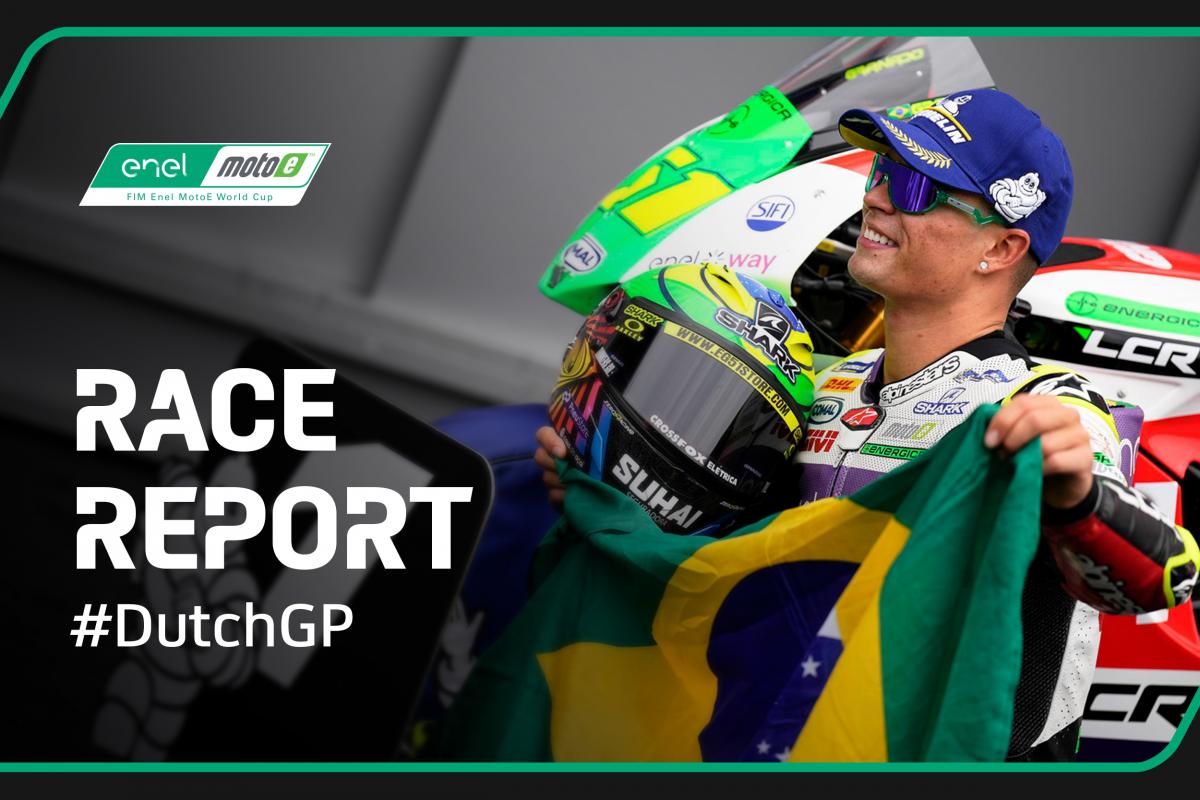 Eric Granado (LCR E-Team) has been rewarded for his bravery in tricky conditions with victory in Race 2 of FIM Enel MotoE™ World Cup round at the Motul TT Assen. Granado scythed his way from fourth to the lead in just three laps around the TT Circuit Assen, in a contest which would be cut short due to an incident for his team-mate, Miquel Pons. World Cup leader Dominique Aegerter (Dynavolt Intact GP MotoE™) claimed second and Mattia Casadei (Pons Racing 40) also got onto the podium.

No time to waste

It was a five-wide run to the first corner when the action finally got underway, after patchy showers twice delayed the start. Casadei came from fourth on the grid to lead the field into the first corner while Aegerter fended off an early challenge from Matteo Ferrari (Felo Gresini MotoE™) at De Strubben, and then again at De Bult, to end the opening lap in second position, with Granado just behind them.

Riders had no time to waste, given the delays saw the originally scheduled distance of eight laps cut to six, and Granado was a man on a mission. He passed Ferrari as they turned into Haarbocht at the start of Lap 2 although, in doing so, he made room for Pons to follow him. A brief battle between the LCR duo ensued before Granado shook off his team-mate and attacked Aegerter.

Granado doesn’t let up despite rain

Incredibly, as the rain flags flew again, Granado passed Aegerter around the outside of the high-speed Ramshoek left-hander, then went down the inside of Casadei when they arrived at Haarbocht again on Lap 3. Ferrari got back underneath Pons three corners further around at the Ossebroeken complex and, unfortunately, that was just the start of the LCR rider’s troubles.

Exiting the following corner, De Strubben, Pons highsided and was thrown from his motorcycle. Running two bikes back, Marc Alcoba was unable to avoid the stricken Spaniard, with the impact taking him down also. Alcoba eventually remounted but, with Pons being attended to at the side of the track, the race was red flagged during Lap 4 and would not restart.

Results were declared effective the end of Lap 3, with half points awarded. Granado was therefore classified the winner, ahead of Aegerter, Casadei, Ferrari, Niccolo Canepa (WithU GRT RNF MotoE™ Team), Alex Escrig (Tech3 E-Racing), Kevin Manfredi (Octo Pramac MotoE™), Maria Herrera (OpenBank Aspar Team), Kevin Zannoni (Ongetta Sic58 Squadracorse), and Hector Garzo (Tech3 E-Racing). Pons was thankfully conscious and, after a check-up at the circuit medical centre, went to a nearby hospital in order to undertake a CAT scan on his pelvis due to pain. He has been declared unfit.

In the FIM Enel MotoE™ World Cup standings, Aegerter has moved to 158 points, with Granado second on 126.5 points and Ferrari third on 112.5. Action in the electric class resumes with the Motorrad Grand Prix von Österreich, at the Red Bull Ring – Spielberg on August 19-21.