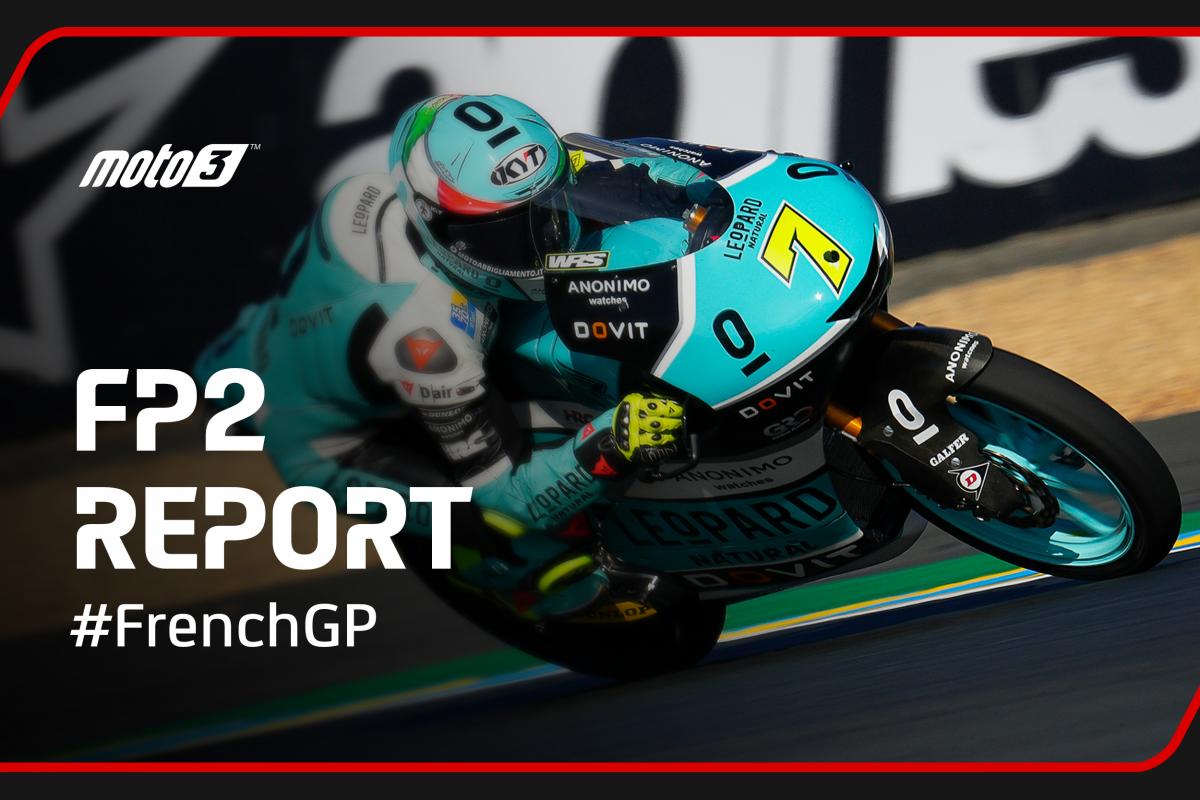 It’s been a good day for the Leopard Racing Team, while Championship leader Sergio Garcia just about squeezed into the top 14

Leopard Racing’s Dennis Foggia picked up from where he left in the morning session with a dominant performance ensuring he takes Friday Free Practice honours at the SHARK Grand Prix de France in Le Mans. The Italian recorded the three fastest laps of the session for an impressive 1:41.680 to leave him 0.428s clear of title rival Izan Guevara (Gaviota GASGAS Aspar Team), with teammate Tatsuki Suzuki in P3.

The second Free Practice session for the lightweight class took some time to spark into life, with only a select few improving their morning times early doors. Carlos Tatay was one of those, as the CFMoto Racing PruestelGP rider put in an early lap to go top for the session and second overall behind Foggia. The former Rookies Cup Champion’s strategy paid off, as he sits comfortably fourth.

Foggia’s position on top of the combined standings began to come under threat as the grid came out for their final runs with less than 10 minutes to go, with red sectors popping up all across the timing screens. The Italian then showed his class to spin three laps which consolidated his position, and leave everyone else scrambling for a valuable Q2 place.

Who else sits inside the Q2 places?

Jaume Masia (Red Bull KTM Ajo), Andrea Migno (Rivacold Snipers Team), Elia Bartolini (QJMOTOR Avintia Racing Team) and Ryusei Yamanaka (MT Helmets – MSI) are all comfortably among the provisional Q2 places following the end of their runs. They are joined by Riccardo Rossi (SIC58 Squadra Corse) and Ayumu Sasaki (Sterilgarda Husqvarna Max) in the top 10, but a number of other riders will be looking over their shoulders come FP3.

Championship leader Sergio Garcia (Gaviota GASGAS Aspar Team) didn’t get off to the best of starts, crashing at Turn 10 on his out lap, and couldn’t manage to find the late pace needed to squeeze himself into the top 14. He lies just behind John McPhee (Sterilgarda Max Racing), Daniel Holgado (Red Bull KTM Ajo), Deniz Öncü (Red Bull KTM Ajo) and Diogo Moreira (MT Helmets – MSI) and the Spaniard will need to come flying out of the blocks on Saturday morning.

Garcia wasn’t the only faller either, with Moreira also going down early, as did Öncü at Turn 8. All riders are ok. Gerard Riu (Rivacold Snipers Team) had to be taken to the medical centre after a simultaneous but separate crash with Taiyo Furusato (Honda Team Asia), but has since been declared fit.

Lorenzo Fellon suffered a Turn 4 highside, while his SIC58 Squadra Corse teammate Riccardo Rossi also crashed when coming out of the Dunlop chicane. Ryusei Yamanaka was the other FP2.

Next up for the lightweight class is FP3 on Saturday morning. Make sure you tune in from 09:00 CET as they battle for the coveted Q2 places.