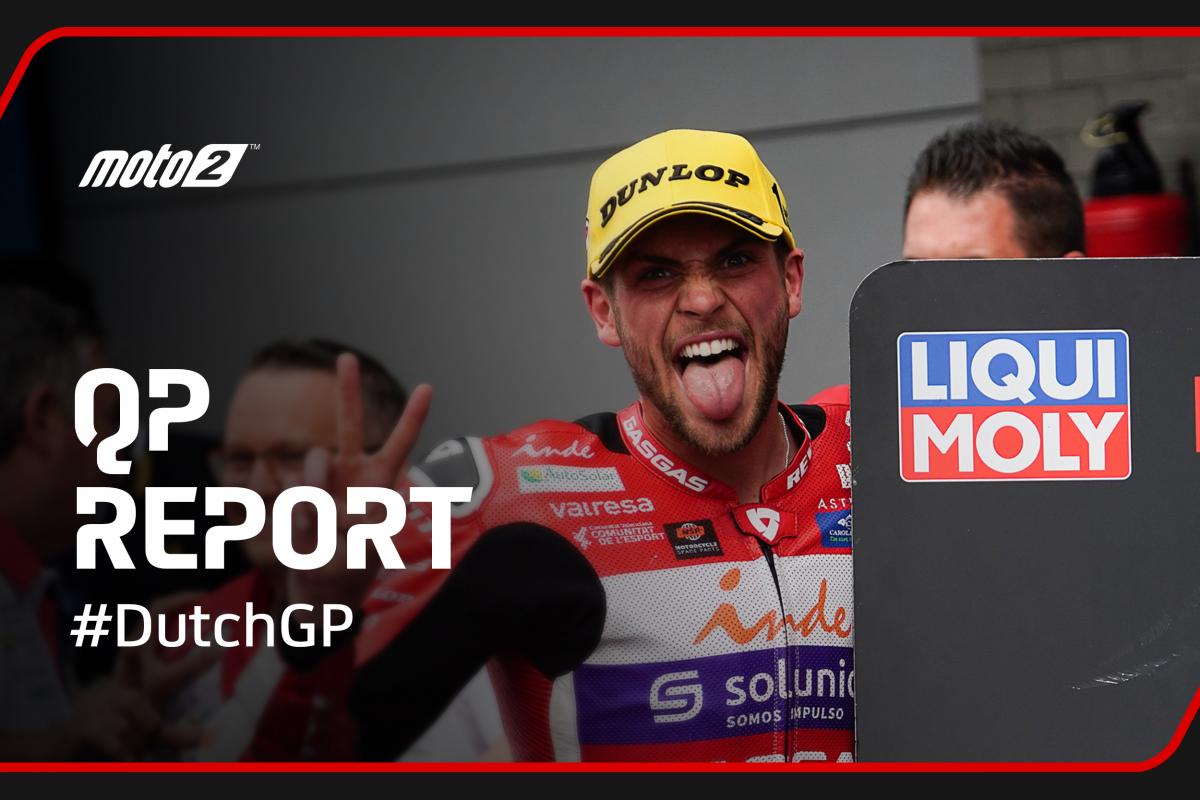 Only 0.011 seconds separated the GASGAS riders at the end of Moto2™ qualifying at Assen

Jake Dixon has scored the Moto2™ pole position after an unbelievably close Q2 session at the Motul TT Assen. Not only did he beat his teammate Albert Arenas by 0.011 seconds in an Inde GASGAS Aspar Team qualifying one-two at the TT Circuit Assen, Sam Lowes (Elf Marc VDS Racing Team) and Ai Ogura (Idemitsu Honda Team Asia) were each only 0.020 seconds slower again. Ogura may have missed the front row but he has a tantalising chance to move into the World Championship lead on Sunday afternoon given Celestino Vietti (Mooney VR46 Racing Team) could only manage 11th on the grid after a crash.

Illustrating just how tight qualifying was, Lowes took over top spot when he set a 1:36.767 seconds with just over five minutes remaining, a lap which was less than a tenth of a second quicker than that which put Q1 pace-setter Jorge Navarro (Flexbox HP40) on top after the first flyers in Q2. Despite moving into provisional pole position, the Briton gesticulated at Elf Marc VDS Racing team-mate Tony Arbolino after he had crossed the line, apparently feeling that the Italian had held him up near the end of the lap.

Lowes might have had good reason to be upset, considering how tight the margins would be. Arenas clocked a 1:36.747 in the final three minutes, before Ogura threatened to take the ascendancy when he moved onto the provisional front row with a 1:36.787. That was still the top three with the chequered flag out, after which Dixon took a second career pole position by an extremely slim margin – can the 26-year-old turn it into a breakthrough Grand Prix victory?

Vietti sets himself up for a tough Sunday

Behind that top four was Alonso Lopez (MB Conveyors Speed Up) on a 1:36.842 and Navarro in sixth on his first flying lap time. Joe Roberts (Italtrans Racing Team) was shy of not just the first row but also the second row of the grid despite being only 0.148 seconds off the best pace, and the American is set to start seventh. Dutchman Bo Bendsneyder (Pertamina Mandalika SAG Team) qualified eighth for his home race and last-start winner Augusto Fernandez (Red Bull KTM Ajo) will join him on Row 3. Rounding out the top 10 at only 0.292 seconds slower than pole was Marcel Schrötter (Liqui Moly Intact GP).

Vietti has work to do if he is to leave Assen with the Championship lead still in his hands. The Italian was sixth-fastest on a 1:37.085 when he lost the front at Ossebroeken before the halfway mark, and was ultimately shuffled back to 11th. Arbolino is another notable who is deep in the field having qualified 13th, while Fermin Aldeguer (MB Conveyors Speed Up) salvaged 20th on the grid despite an early technical problem in Q1. Aron Canet (Flexbox HP40), who is fourth in the World Championship for now, had to withdraw after FP3 due to a persistent nosebleed following a recent road car accident.

Will we see a new Championship leader by the end of the weekend? Can Dixon become a Moto2™ race winner? After the Sunday morning Warm Up session, we will get our answers from 12:20 (GMT +2)!