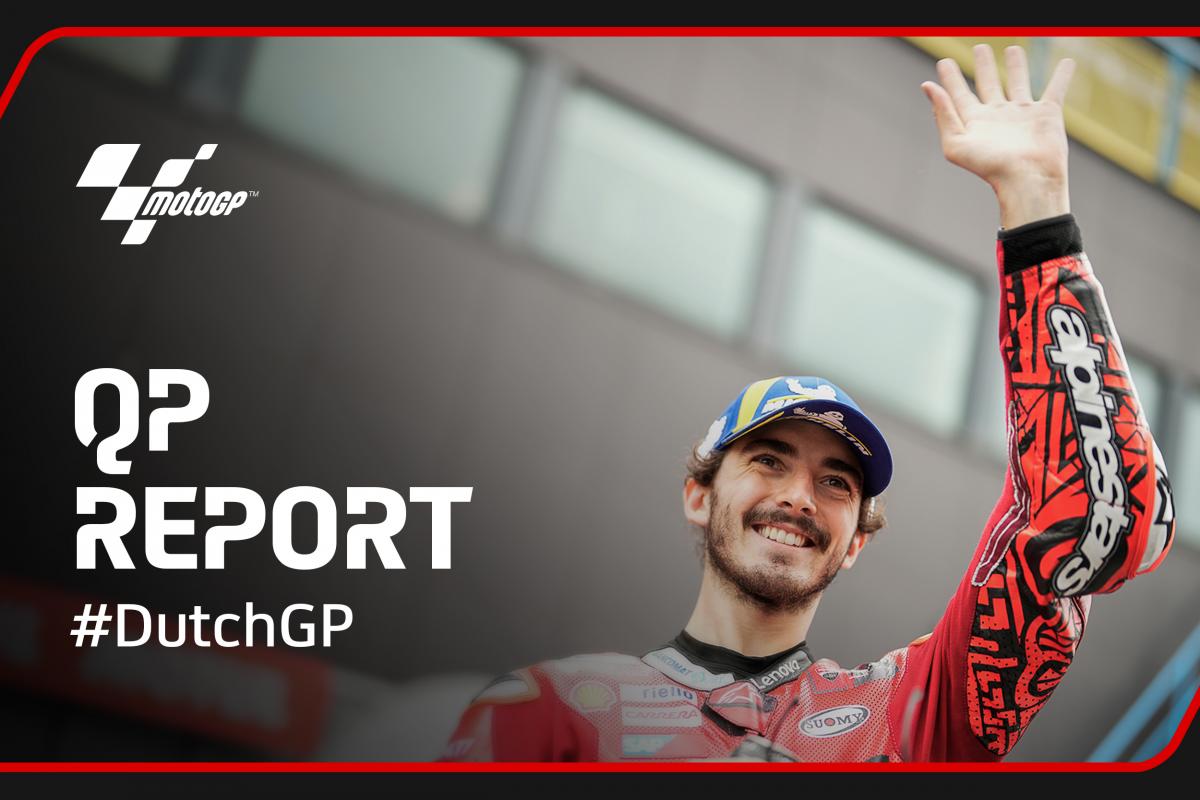 Francesco Bagnaia has stormed to pole position for the Motul TT Assen, shattering the All Time Lap Record as he looks to breathe new life into his MotoGP™ World Championship title bid. The Ducati Lenovo Team rider set a 1:31.504 to beat the old benchmark at the TT Circuit Assen by more than three tenths of a second. Championship leader Fabio Quartararo (Monster Energy Yamaha MotoGP™) qualified second and Jorge Martin (Prima Pramac Racing) was also on lap record pace as he grabbed the final berth on the front row.

With isolated spots of rain during Q1, and grey clouds hanging over Assen as Q2 got underway, riders had the hammer down straight away. Both Martin and Quartararo broke the All Time Lap Record on their first flying laps, the former on a 1:31.708 and the latter just 0.010 seconds slower. At the end of the opening runs, they were still top two and Francesco Bagnaia (Ducati Lenovo Team) third at 0.311 seconds off the pace, with Quartararo returning to the pits via an excursion through the gravel at Haarbocht (Turn 1) but keeping his YZR-M1 upright.

Armed with a new Michelin soft slick tyre on the rear of his Ducati, Bagnaia then came out and charged to the 1:31.504 on the first flying lap of his second run. Martin lost the chance to improve further when he went down at De Strubben (Turn 5), and his error was punished when Quartararo pinched second place with a 1:31.620. ‘El Diablo’ was still pushing with the chequered flag out until he too nearly had a crash at De Strubben and while he managed to save it, the moment locked Bagnaia into a fourth pole position in the last six rounds.

Marco Bezzecchi (Mooney VR46 Racing Team) went under the lap record too, setting a 1:31.796 which puts him fourth on the starting grid, while Free Practice pace-setter Aleix Espargaro (Aprilia Racing) grabbed fifth with a 1:31.868. That was just 0.364 seconds away from pole and Espargaro must have felt he had more, considering he vented his anger at Jack Miller (Ducati Lenovo Team) when the Australian triggered a late yellow flag with a spill at De Strubben. Miller, who would be classified sixth on the 1:32.124 which he set on his first run, then had an even bigger moment with another Aprilia when Maverick Viñales came up behind him at high speed on the final flying lap. The Ducati rider would later be handed a Long Lap Penalty by stewards for riding slow on the race line.

Johann Zarco (Prima Pramac Racing) took seventh on a 1:32.175, and will be joined on Row 3 by Miguel Oliveira (Red Bull KTM Factory Racing) and Alex Rins (Team Suzuki Ecstar). The Red Bull KTM Factory duo had both gone the long way in qualifying and Brad Binder would eventually claim 10th on the grid, ahead of Viñales and Takaaki Nakagami (LCR Honda Idemitsu).

Luca Marini (Mooney VR46 Racing Team) missed out on advancing to Q2 by just over three tenths of a second and is set to line up 13th on the starting grid after clocking a 1:32.787. It had been Joan Mir (Team Suzuki Ecstar) who was third-fastest in Q1 on a 1:32.898 when he folded the front of his GSX-RR at De Strubben, and the Spaniard was unable to improve thereafter, leaving him 14th on the grid. Fabio Di Giannantonio took 15th and his Gresini Racing MotoGP™ team-mate Enea Bastianini was only able to salvage 16th after an early drama. ‘La Bestia’ suffered some sort of problem before he had even made it off the pit exit road at the start of the session, where he pulled off before running back to fetch his other Ducati.

The MotoGP™ riders are back on-track for the Warm Up on Sunday at 09:40, then it’s lights out for what is shaping up to be another thrilling Assen TT itself at 14:00 (GMT +2)!