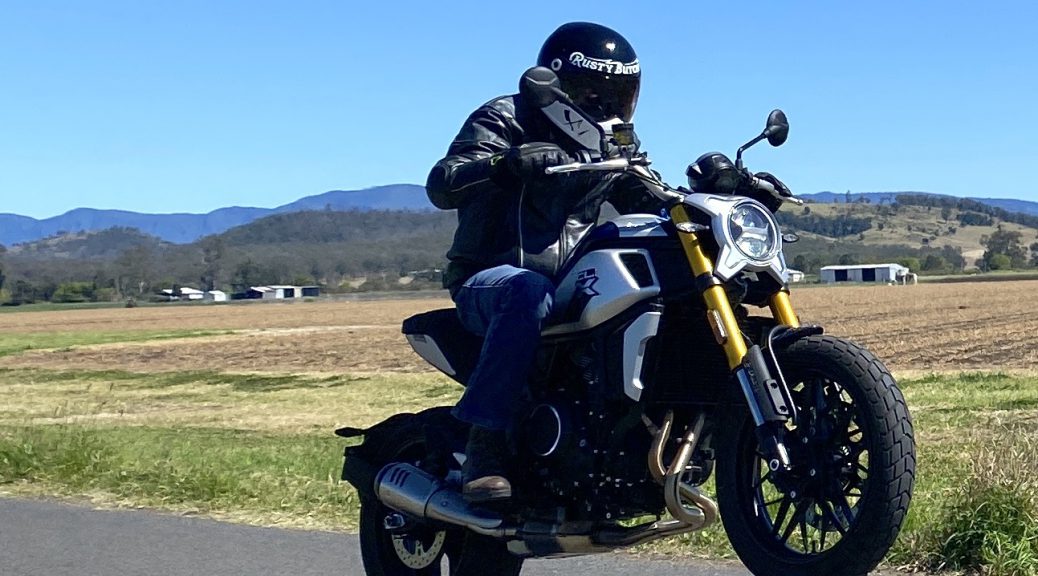 Australian importer Mojo Motorcycles has released the second model in the CFMOTO 700CL-X family with the addition of the Sport which is much more than just a name change and an extra $1000.

The Heritage was the first model in the new family to be released a few months ago at an incredible $A9490. The Sport costs $A10,490 ride away and will be followed by an adventure model early next year with pricing not yet confirmed.

CFMOTO Australia includes a two-year unlimited kilometre warranty plus an extra year if servicing is done by an authorised dealer.

I reviewed the Heritage in September and loved the bike’s value, styling and spirited engine.

The Chinese manufacturer has produced a good basis for a family of bikes with the Sport slotting into the cafe racer sector with its clip-on bars and bar-end mirrors.

The Heritage and Sport come standard with two engine modes, cruise control, USB charging port under the seat and full LED lighting including a headlight that adapts illumination to ambient conditions.

Aesthetically, the Sport gets a black catalytic convertor which is a lot less ugly than the bare metal of the Heritage, striking paintwork, a headlight mini-cowl, black levers, black forks, carbon-fibre-style trim and five-spoke wheels.

It also features a solo seat and tail cowl, yet pillion pegs are fitted, so you can presumably buy a rear seat. In some states, rego costs less for a solo seat.

Like many CFMOTO bikes, this is styled by Kiska Design House in Austria and the subtle paintwork and trim creates a fresh and sporty look.

It is powered by the same inline twin-cylinder water-cooled engine as in their 650cc range.

However, it has been stroked 4mm to 693cc, so it is no longer learner legal in Australia.

Other engine updates include Bosch fuel-injection, split connecting rods, a slipper clutch, forged pistons and improved intake, pushing power from 41.5kW to 55kw and torque from 62Nm to 67Nm. 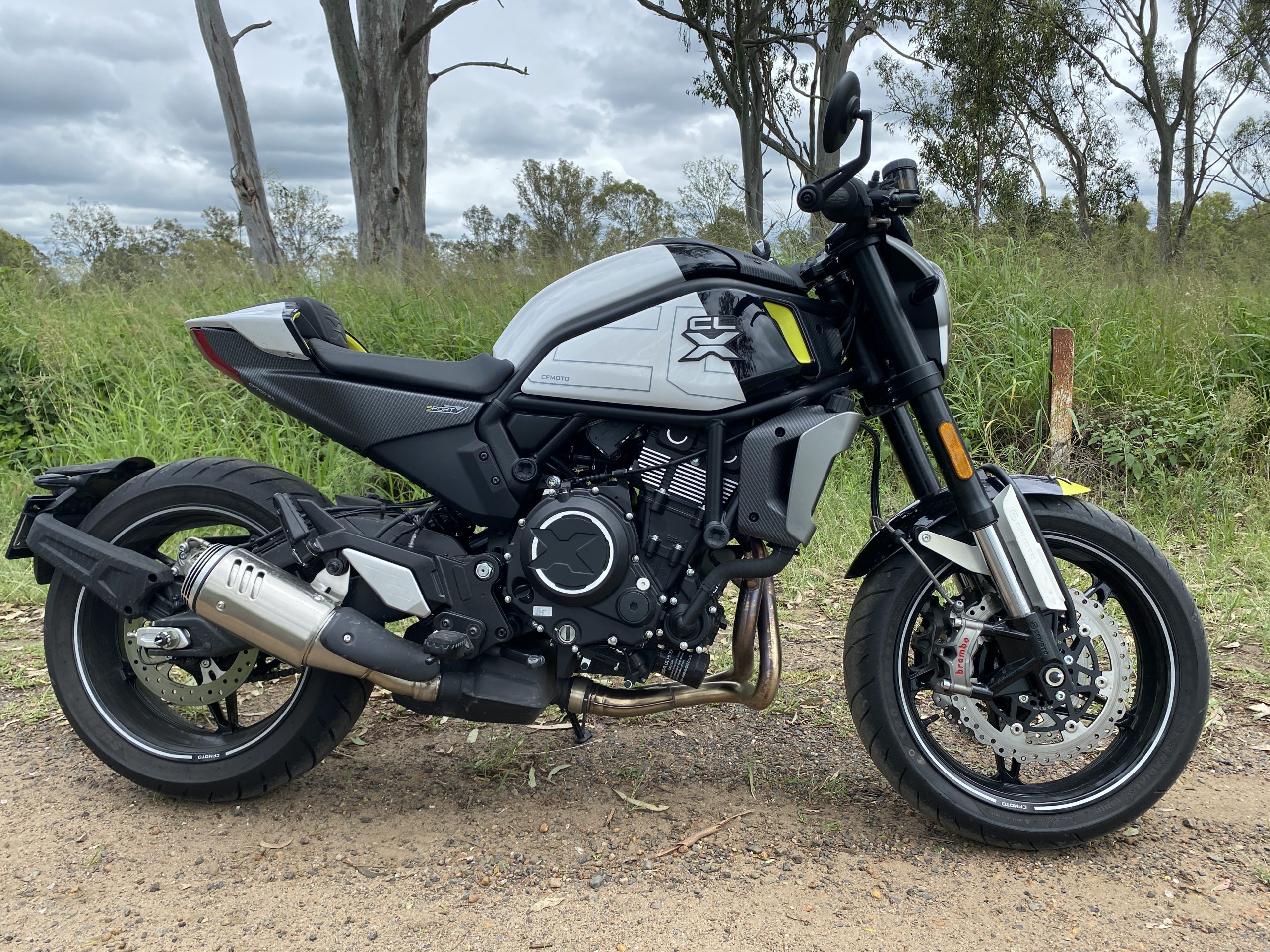 The unit is free revving with a beefy midrange and buzzing top end.

I was not happy with the short gearing on the Heritage which spins at 4500 revs in sixth gear at 100km/h.

However, the same gear ratios on the Sport make a lot more sense in a canyon-blasting cafe racer.

You won’t be touring highways for long spells on this bike, so you won’t suffer those tingling fingers and toes as on the Heritage.

But don’t think this is a radical riding position either.

The clip-on bars are perched atop a high yoke, so the bars aren’t too much lower than on the Heritage.

You also sit 5mm lower in the seat, so the riding position requires only a slightly more forward lean to the bars.

The bars are nice and narrow for lane-filtering and the bar-end mirrors don’t poke out too far.

They are also perched on stubby shafts that prevent any blur from engine vibration and will easily flip down to avoid hitting car wing mirrors and quickly flip back into place again.

Despite being a bargain, the Chinese company hasn’t cut corners when it comes to the tyres and brakes.

While the Heritage gets exotic Pirelli MT60RS “scrambler” tyres found on Triumph and Ducati scramblers, this is shod with sticky Maxxis MA-ST2 sports tyres. 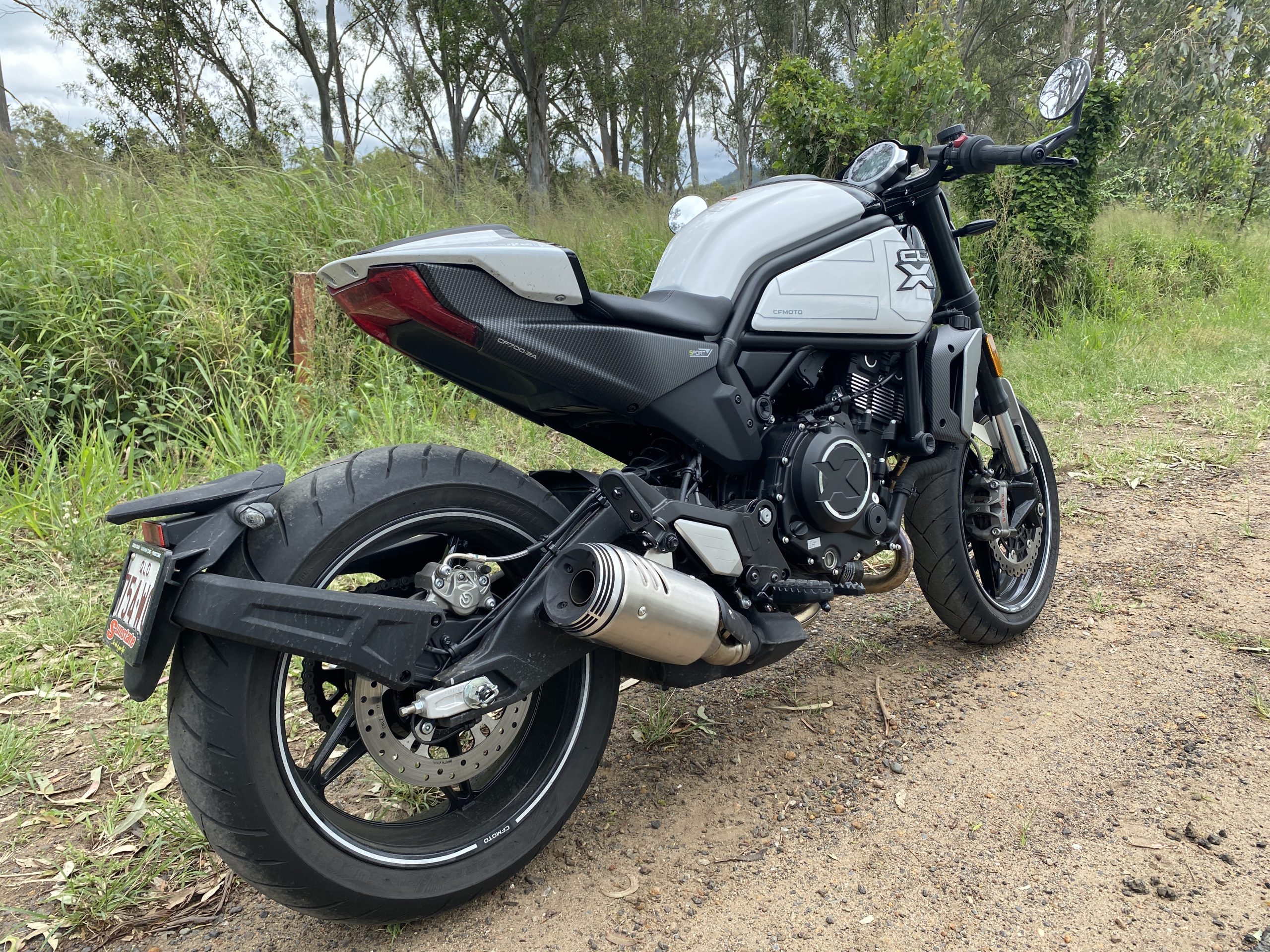 But what really sets this apart from the Heritage is the brakes, featuring 320mm twin petal discs with Brembo twin-piston callipers and Continental ABS.

Sport weighs in at 9kg more than the 196kg Heritage, but with those brakes, its stopping power is awesome.

Together with the short-gearing, it is a hard-charging and hard-stopping bike built for carving for favourite mountain pass.

However, the other shortcomings of the Heritage remain.

My main gripe is the KYB rear shock. Its compression stroke is too harsh and non-adjustable.

You can adjust the rebound and the preload, but getting a C spanner in there is difficult.

The fully adjustable KYB forks are ok although it does dive hard under braking which makes the back wheel light. This causes a fair amount of slither into a corner, despite the slipper clutch preventing rear-wheel lock up under down shifts.

My other gripe is the instruments. 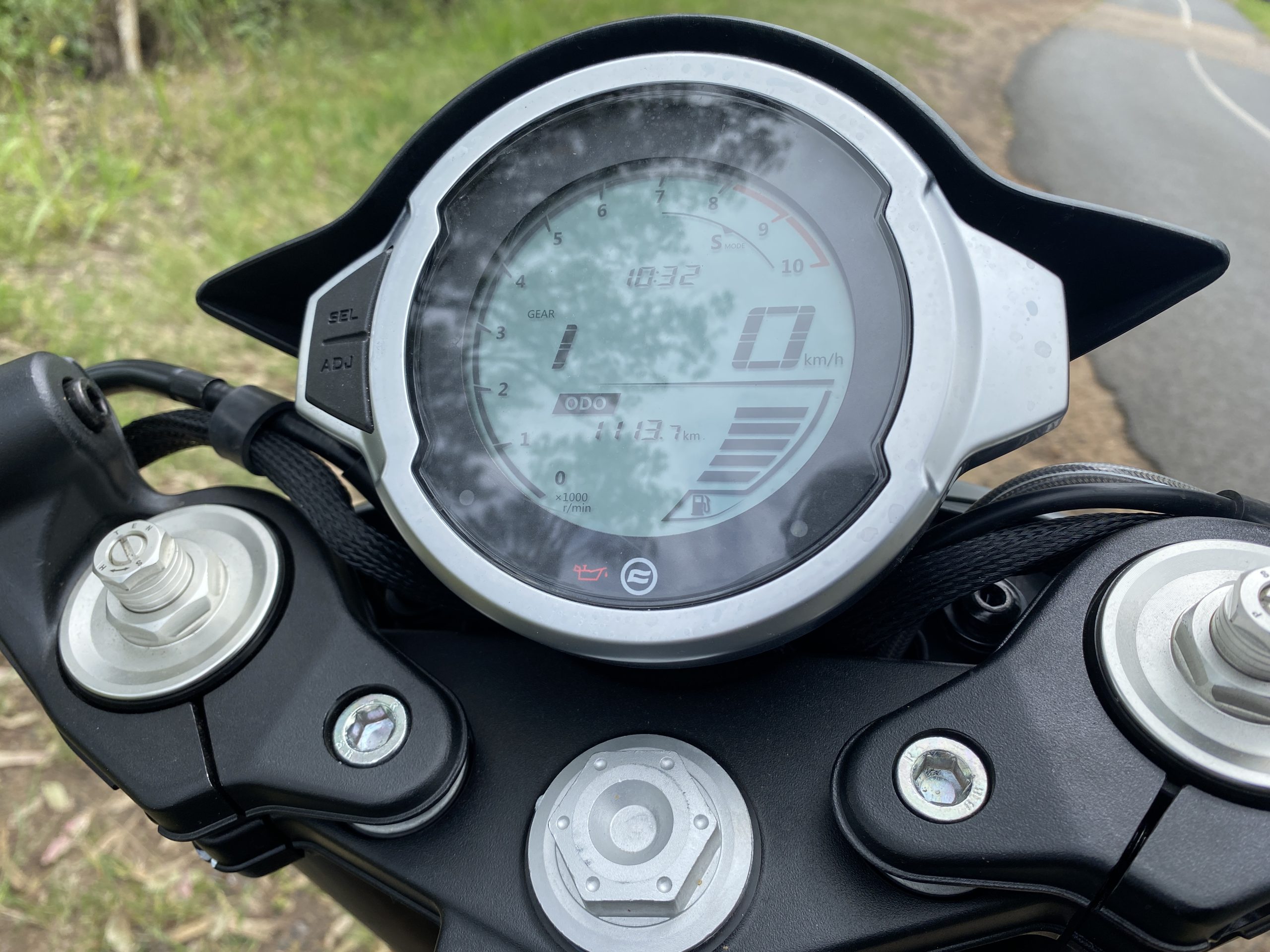 While they show a lot of information, they lack fuel range, a second trip meter and ambient temperature, while having some other information that isn’t even explained in the manual.

The digital fuel gauge also drops quickly and starts flashing way too soon with five litres in the 13-litre tank remaining which should get you another 100+km of range.

These are minor gripes for what is a handsome, well-appointed motorcycle that will put a smile on your face without causing you a pain in your hip pocket. 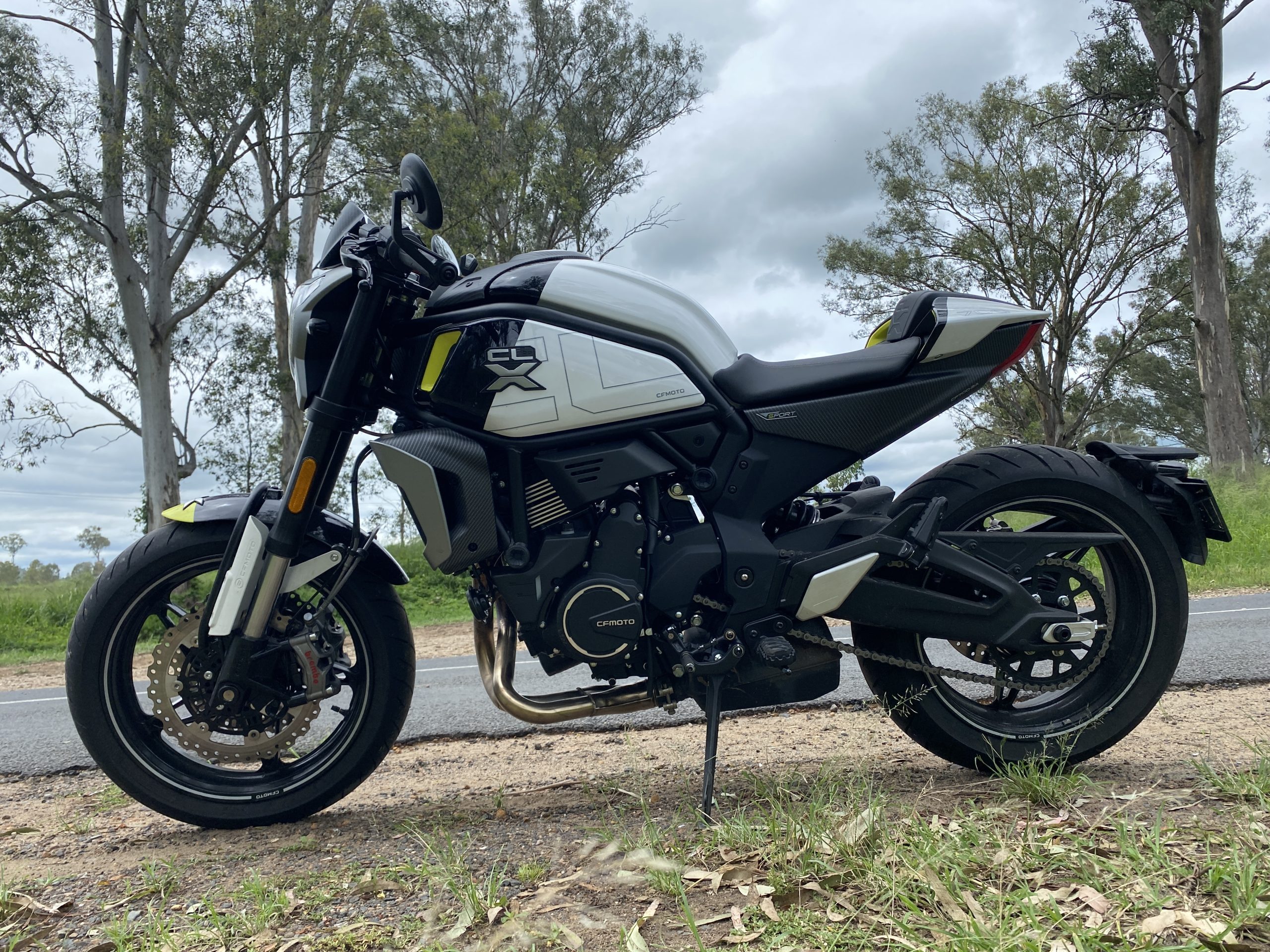