Proudly brought to you by Dunlop Geomax

The eight seeded riders are led by none other than Chris Holder who will be joined by the 2018 reigning Champion, Rohan Tungate, Max Fricke, Jack Holder, Zane Keleher, Brady Kurtz, Sam Masters and Jaimon Lidsey.

Former world and multiple Australian champion Chris Holder used the Jason Crump Classic at Kurri Kurri Speedway Club on Boxing Day to signal he will be a force in the upcoming Australian titles.

Holder won his five heats and then took out the A-final from Tungate, 2017 champion Sam Masters and Holder’s younger brother and 2018 NSW champion Jack.

At the close of Round 1, riders will move North to Mildura, Victoria for Round 2 on 5th January, followed by Round 3 on 7th January at Undera, Victoria. The penultimate round will be held on 9th January at Albury Wodonga, Victoria, with a close to the Championship at Kurri-Kurri, New South Wales on 12th January.

Don’t miss a moment of the 2019 Championship by going to NRGTV to watch all of the action live and get up-dates by checking out the Australian Speedway Championship website and on Facebook.

The Ipswich Switches Junior Speedway Club will host four nights of action between the 17th and 20th of January at Willowbank Raceway with the Under 21’s 500cc title, the Under 16’s 250cc and 125cc titles and the Under 16’s 125cc Team title up for grabs.

The Under 21’s 500cc Speedway Championship will see reigning champion Jaimon Lidsey hoping to regain the title but he will have to contend with Matthew “Happy” Gilmore, Kye Thomson, Cooper Riordan and Jordan Stewart (to name a few) to win in 2019.

The Australian Under 21’s Speedway Championship is the final step riders must make for their chance to represent Australia on the international stage at the FIM Team Speedway Under 21 World Championship. Australia will head to Vetlanda, Sweden for the Semi Finals, and if successful they will then head to Manchester, United Kingdom for the Finals!

Of the nominated riders, 16 have been drawn to compete in the 2019 Australian Championship, with two reserves also selected.

The 2019 Under 16’s 250cc Championship has drawn 13 successful nominees from across Australia including reigning Champion Keynan Rew who along with Patrick Hamilton and James Pearson are already creating a household name for themselves as they climb up through the ranks!

The Under 16’s 125cc Solo and Teams Championship will feature up and coming stars such as James Pearson who fans will also see compete in the Australian Under 16 250cc Speedway Championship, plus Flynn Nicol and Patrick Bowes.

The official entry list made up of 16 riders was drawn from a total collection of 20 nominated riders from across Australia.

It’s that time of year again where we are staring down the barrel of the start of two iconic events with the new Supercross season kicking off at Anaheim on January the 5th then the Dakar Rally with an all new route through Peru starts just a day later.

That is 17 very talented and competitive men all with their eyes on the one prize so look out A1 – it is going to be big and let’s hope Chad grabs the holeshot and comes through with what would be an historic win!

A1 will also see the opening round of the 250SX West Coast Series and it is going to be a cracker with Adam Cianciarulo, Shane McElrath, Chase Sexton, Austin Forkner, RJ Hampshire, Dylan Ferrandis, Mitchell Harrison, Michael Mosiman, Colt Nichols, Sean Cantrell, Cameron McAdoo and Jimmy Decotis all fit and looking for a win while young Aussie hard charger in Tomas Ravenhorst will also be looking to make a name for himself on the world’s biggest stage.

As for our other Aussie hope in Hunter Lawrence, we will see the Geico Honda rider contest the 250SX East Coast Series which kicks off at Minneapolis on February the 9th and from what we have seen Hunter is looking sharp as he prepares for his rookie supercross season.

As for Dakar 19, 138 motorcycle competitors are going to set off on January the 6th for 11 days of competition that will see them complete over 5500km across some of the most desolate and uninviting terrain Peru (or anywhere else for that matter) has to offer and as you would expect all of Australia will be hoping that Toby Price and Rodney Faggotter go through the event trouble free, ride to their full potential and come home 1-2 – not too much to ask is it?

Bloss Out – Bogle In

Rocky Mountain ATV/MC-WPS-KTM’s Benny Bloss will miss the entire 2019 Monster Energy Supercross season after sustaining a torn ACL in a practice crash early last week so the team has signed former 250SX East Region Champion Justin Bogle to fill-in. Bogle had put together his own program for 2019 after a deal with Phoenix Racing Honda had fallen through.

“Benny has been riding and progressing so well, it’s heartbreaking to Benny, his family, and the team,” said team owner Forrest Butler in a statement. “Benny has been with us since being a rookie in the summer of 2016, and 2019 was really ‘the year’ we were all ready to see what he could do. Really, there isn’t much to say as there are other injured riders too, or ones that have been there. We say it’s not fair, but it’s part of the sport and instead of wishing what could have been, it’s time to just focus ahead, get surgery and put in the hard work to be ready for the 2019 Motocross Nationals.”

“It was the silliest crash and there was nothing spectacular about it, extremely frustrating,” said Bloss in a statement. “I landed off a triple, and just went to the inside to make a new line, nothing crazy. I hit a slick spot and just lost the rear end doing the standard slide out, unfortunately, I had my leg fully committed and it got pinned under the handlebar and the ground. I knew I caught it the at a bad angle, and that’s pretty much end of the story—just the worst possible position I could have slid out in, and now it’s off to get my ACL fixed. I am young though, I have a lot of good people and sponsors behind me, I already have surgery scheduled as of today and have my full vision set on making the start of the outdoors.”

Youthstream have announced another revised calendar for the 19 round 2019 FIM World Motocross Championship which will now start on the first weekend of March at the Patagonia-Argentina Circuit of Neuquen and end in Hong Kong of all places on the third weekend of September.

Here is a summary of the changes:
-The MXGP of Switzerland anticipated for August has been cancelled  - The MXGP of Italy in Imola will now be held on the 17th and 18th of August instead of the 21st and 22nd of September
– The MXGP of Hong Kong will move from the 20th and 21st of April to the now available 21st and 22nd of September as per the local organization request.\
– The venue for the 2019 MXGP of Lombardia on May 12th will be Mantova

Youthstream has released the Provisional OAT (Officially Approved Teams) List for the 2019 FIM Motocross World Championship Season confirming that 39 teams have entered the MXGP and MX2 classes ,with 35 riders entered for MXGP and 32 for MX2 with the two Honda MX2 teams yet to sign riders for four spots available.

The list gives a breakdown of the teams currently entered into the new season of racing along with the riders whom will represent them as the series travels throughout South America, Europe, and Asia.

The 2019 Provisional OAT MXGP & MX2 Lists can be viewed in its entirety below.

Promising Belgian youngster Liam Everts will officially become part of the KTM racing division from 2019 in an agreement that should see the latest generation of a famous family dynasty make his path up the motocross ladder to Grand Prix.

Everts, 14, has evolved as a racer in the last year, and his speed in just a second term with an 85cc motorcycle led to a third-place finish in the EMX85 European Championship. While Liam is able to count on the expertise and peerless achievements of his father Stefan—who is currently recovering from illness—he can also rely on the advice from four-times world champion and grandfather Harry as well as his mother, Kelly, who was so central to Stefan’s motocross efforts as he laid siege to all classes of the FIM Motocross World Championship.

The Everts’ will operate out of their own structure in 2019 as Liam prepares for his first season with the KTM 125 SX; the motorcycle with which Rene Hofer scored victories and red plates as EMX125 European Championship leader in 2018.

Liam Everts: “It feels like an honour for me to ride with KTM because it feels like they are the best brand in motocross. We have a long deal in place but I have been on a KTM for a while now and I love the bike; it’s amazing how it handles and how it fits my style. To get this contract is great. I’m really happy and I’m really looking forward to the future. Hopefully we can make some nice things together, we’ll go step by step and build along the way.”

Robert Jonas, VP of Offroad: “Liam comes from one of the best family names in motocross and while that also gives him an advantage it also brings pressure, but we’re excited by what we have seen from him so far. It’s clear the progress he has made with his pace and technique in 2018 and that points to even more potential. It is still early but he could go all the way. Liam is clearly making the commitment to racing at the highest level while looking at the next steps to get better and to enjoy success, so we’re really happy to be there with him.”

The family of Stefan Everts released a positive update regarding his battle with malaria with the ten-time FIM Motocross World Champion beginning rehabilitation. 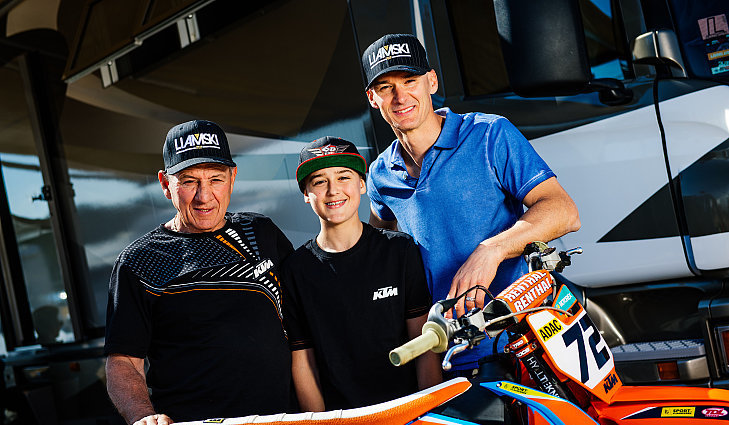 Everts, who was hospitalized earlier this month after contracting the mosquito-borne disease at a charity event in the Democratic Republic of Congo, remains at the University Hospital of Leuven in Belgium, but has begun his physical rehabilitation after tests have revealed that he did not suffer any damage to his brain or organs.

“Everts started with his [physical] rehabilitation yesterday. Compared to the worrying condition of a few weeks ago, he’s already doing much better. Although he is still in the intensive care of the UZ in Leuven, he is already getting out of bed and can already walk a little. After a charity in Congo mid-November, the legend had suffered an aggressive form of malaria. The state of health of Everts had deteriorated so much that he was in danger for a long time. However, studies last week showed that neither his brain nor his organs suffered permanent damage due to the malaria attack. About the duration of his stay on intensive care and his rehabilitation is not yet certain.

“Everts realises after a good conversation with the professors in Leuven that he escaped the worst. ‘That I’m still here is my most beautiful Christmas present,’ let him know. Stefan and his family want to thank all the people for the huge support they got in the last few weeks and wish everyone a Merry Christmas and a Happy New Year. In new developments, the family—who is now looking to focus on Stefan’s rehabilitation—will again communicate through a press release.”