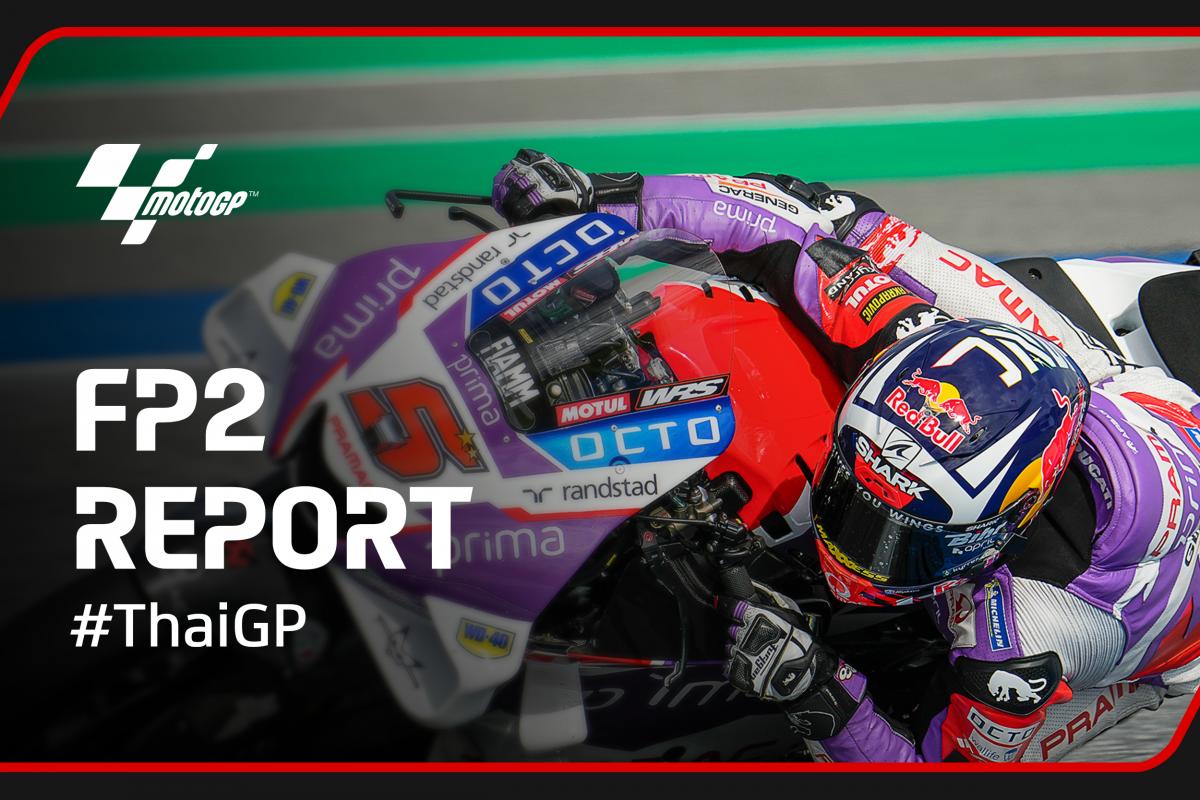 Prima Pramac Racing’s Johann Zarco is the pace-setter in an all-Ducati top three after the first two MotoGP™ Free Practice sessions at the OR Thailand Grand Prix. Zarco’s 1:30.281 saw him finish FP2 0.018 seconds ahead of the Bologna manufacturer’s key man in the title race, Francesco Bagnaia (Ducati Lenovo Team), with Jorge Martin third on the other Pramac entry. World Championship leader Fabio Quartararo (Monster Energy Yamaha MotoGP™) is in the top 10 as it stands but both Enea Bastianini (Gresini Racing MotoGP™) and Aleix Espargaro (Aprilia Racing) are both set to go into Q1 if forecasts of heavy rain on Saturday morning prove accurate.

Number 5 to the fore

Much of the pre-event talk centred on what sort of weather we would see in Buriram and while it rained on and off during Friday, the track was well and truly dry for MotoGP™ FP2. That gave competitors the opportunity to work on their race pace and while Alex Rins (Team Suzuki Ecstar) was top for the session on a 1:31.088 with 10 minutes to go, there still had been no change to the combined top 10. That would change once the time attacks started, but even then, only half the 24-strong field improved on their FP1 pace.

Martin was first to shift the benchmark, clocking a 1:30.471 with a new medium Michelin slick fitted to the front of his Desmosedici and a soft to the rear, moving himself out of the Q1 danger zone. Bagnaia then did likewise, his time a 1:30.299 inside the final two minutes of the session. With the chequered flag out, it was Zarco’s turn as he climbed from eighth to first with that 1:30.281, also with a medium-soft combination but with used rubber on the front.

Beyond the top three, we find the rider who clinched the World Championship on MotoGP™’s previous visit to Buriram and the rider who won the title last year. Marc Marquez (Repsol Honda Team) finished the day in fourth position on the 1:30.523 which saw him top FP1, with Fabio Quartararo (Monster Energy Yamaha MotoGP™) fifth courtesy of the 1:30.555 which he set in that morning session.

A different type of team orders?

Interestingly, Quartararo was involved in exchanges with two of the satellite Ducati riders, one at either end of the session. Early on, was seen gesticulating at Luca Marini, who seemed to be taking the opportunity to follow the Yamaha rider out from the Mooney VR46 Racing Team box which is located next door – although then there was a role reversal and FQ20 started following LM10. Finally, on the cool down lap, there was some sort of interaction with Fabio Di Giannantonio (Gresini Racing MotoGP™). Has Ducati sent some of its riders out to ruffle feathers, or is it just a coincidence?

Back to the timesheet, Japanese GP winner Jack Miller (Ducati Lenovo Team) is sixth-fastest overall. He was frustrated with himself at a mistake while going underneath Tetsuta Nagashima (LCR Honda Idemitsu) in the closing minutes, but his FP1 effort was good enough to provisionally book a spot in Q2. Marini took seventh on combined times, ahead of Miguel Oliveira (Red Bull KTM Factory Racing), Rins, and Franco Morbidelli (Monster Energy Yamaha MotoGP™).

A. Espargaro unable to lift himself into the top 10

Bastianini is 11th with no advance on his 1:30.790 in FP1 and while Aleix Espargaro did improve, the 1:30.892 which he set in FP2 only lifted him to 13th. Not helping their cause was a late crash for Cal Crutchlow (WithU Yamaha RNF MotoGP™ Team) at Turn 7 which triggered a relatively long yellow flag in Sector 3. Crutchlow walked away in some pain after losing the rear and being flicked from his YZR-M1 in what was his second crash of the session. Also hitting the floor during the afternoon were Marco Bezzecchi (Mooney VR46 Racing Team) at Turn 3, Fabio Di Giannantonio (Gresini Racing MotoGP™) also at Turn 3 in a separate incident, and Darryn Binder (WithU Yamaha RNF MotoGP™ Team) at Turn 7 – riders okay.

Now, we wait to see what the weather gods have in store on Saturday morning, with Bastianini and Aleix Espargaro among those hoping for dry weather again. Tune in to FP3 on Saturday from 10:50 (GMT +7)!