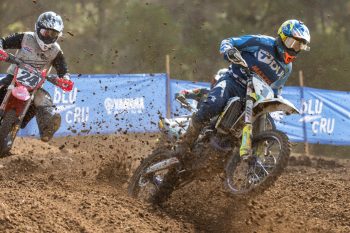 Defending Australian MX1 champion Todd Waters was satisfied to take away a consistent points haul at Canberra’s second round of the 2021 Penrite ProMX Championship, admitting he rode within his capabilities to secure fourth overall.

Waters displayed strong form during early proceedings in the ACT, setting the second-fastest time in qualifying before finishing runner-up in the opening moto, which saw the number one put in comeback performance after dropping outside the top five.

Track conditions significantly deteriorated in the back half of the day, with the Canberra circuit becoming incredibly slick and dusty. It led the Husqvarna Racing Team rider to take a cautious approach in the new back-to-back sprint format – the first of 2021 – where he rode within his limits to 4-5 results, finishing two points shy of the overall podium.

“It was an interesting day out there,” Waters explained. “I qualified well and had a good first race, but the track baked out before the back-to-back races and I struggled with that hard-pack.

“It was an easy track to throw it away on and, with everyone being so close, I didn’t want that to happen. I rode within my capabilities and I’m happy to walk away with the points today – it’s certainly a lot better than crashing and getting 10ths. We might have lost a few points in the championship, but we’ll go back, regroup and look forward to Gillman.”

The Queenslander remains second in the championship standings, seven points down on red-plate holder and MX1 rookie Regan Duffy (KTM Racing Team) as the series returns to action on 30 May at Gillman in South Australia.