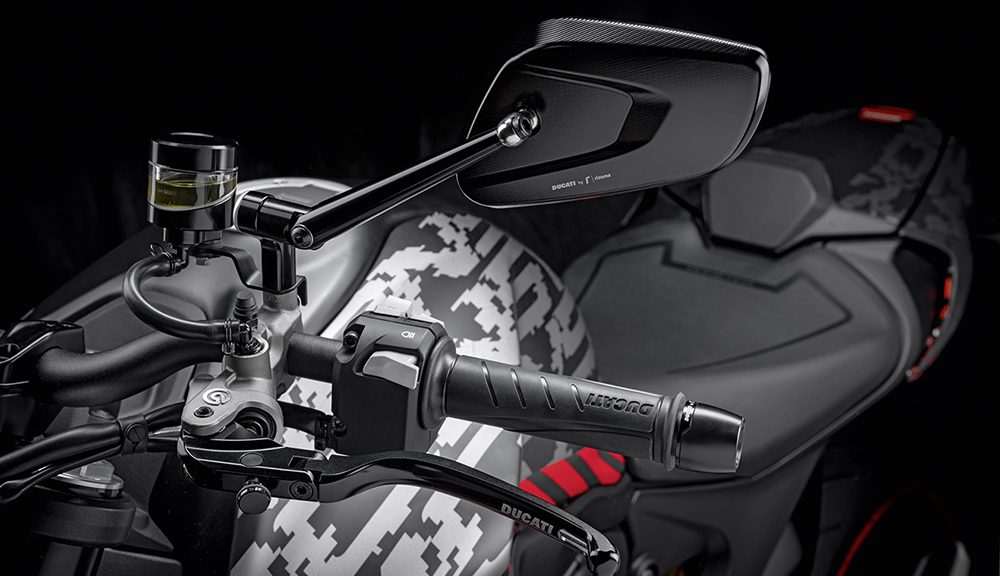 Ducati Australia has announced pricing for two customisation kits that make personalising a Monster even easier.

The Monster has always been a customisation favourite for owners using either factory accessories or aftermarket accessories from various manufacturers plus custom paint jobs.

Now Ducati has made it easier to personalise the naked bike using their extensive catalogue of factory accessories with an online configurator.

It allows you to preview what your bike will look like before you commit to buying the accessories.

Many motorcycle manufactures now use these convenient online configurators; a feature you can’t get that from aftermarket accessories providers.

The configurator will also let you see what the two new accessories kits and two decal sets will look like.

The Pixel kit costs $A1132.56 and consists of a tank cover, seat side panels, seat cover, headlight fairing and front mudguard.

As the name suggests, the $A762.30 GP kit gives it a more race or Ducati Corse look with a special tank cover and seat side panels.

Both kits are available for all three colours of the Monster and Monster Plus: Ducati Red, Dark Stealth and Aviator Grey.

These are complemented by two sticker kits, Corse and Logo, also available for all colours of the bike.

The new Monster and Ducati Performance accessories can now be ordered from all Ducati dealerships.

Electric motorcycles don’t have the design constraints of a petrol-powered bike with its bulky engine, fuel tank, driveline and exhaust pipe, so the designs are getting kookier and kookier.

Fittingly it was won by an electric motorcycle.

It’s called the Tryal because it is based around a triangular body.

Famed LA motorcycle customiser Roland Sands of LA says that electric motorcycles do not have as many restrictions of traditional motorcycles and he looked forward to expanding his design ideas.

He pointed out that batteries can be made into almost any shape and electric motors are much smaller than an internal combustion engine, allowing designers much more flexibility with their creations.

Consequently, we’ve seen some other kooky designs such as the Essence e-raw with its suspended seat and “tank”, the bug-like Johammer, the wild Zec00 and the Racer X shaped like an “X”.

“The future of motorcycling will hinge on getting more riders on two wheels,” Erik says.

“Among an industry catering towards performance and horsepower, the Tryal Bike offers a friendlier approach. Simple, approachable and most importantly … fun, this is a bike that is easy for anyone to ride.

“A modern day mini-moto with 14” wheels, electric drive train, and upright geometry the Tryal is a blast for learning or simply a fun way to get around town.”

The solo Tryal looks like it might be suited to some light adventure riding with its chunky knobby tyres, wire wheels and BMW-style bars.

However, it would be awfully uncomfortable on rough roads with its straight bench seat, the wheels are only 14 inches and the belt drive system would pick up some gravel.

This is really an urban bike with its scooter-esque twist-and-go transmission making it easy to ride in traffic.

They have also cleaned up the footpegs with no rear brake pedal, either.

Instead, the brakes are hand levers on the bars like on a scooter.

However, it does feature conventional suspension with a mono shock rear and upside-down forks.

The battery, motor and controller are all housed in the triangular hollow body

There are no details about output, charging times, range or top speed.

We don’t even think this is planned for production, just a design exercise!

However, it’s a good indication, along with some other recent electric motorcycle designs, of how strange the future of motorcycling is going to look.