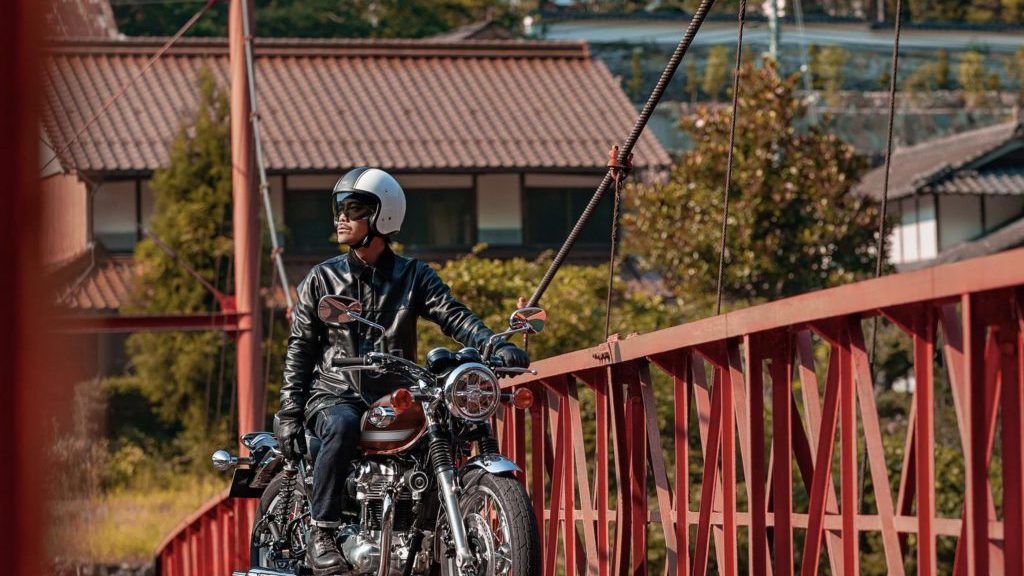 Team Green is fixing to release a beastie into the European market – and many are rating the bike as a less-than-spectacular version of the more ‘genuine’ Triumph Bonneville. 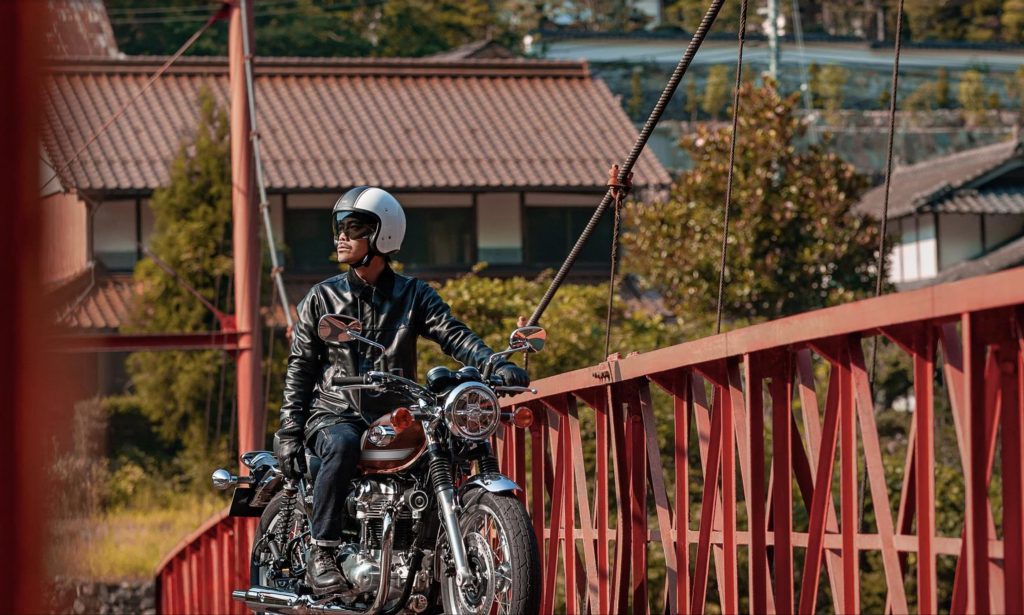 The W800’s predecessor, the W650, was released in Japan in the year 1999. It showcased a nicely overbuilt 650cc air-cooled twin-engine and featured a dependable, modest performance reputation that also happened to do decently in European markets. 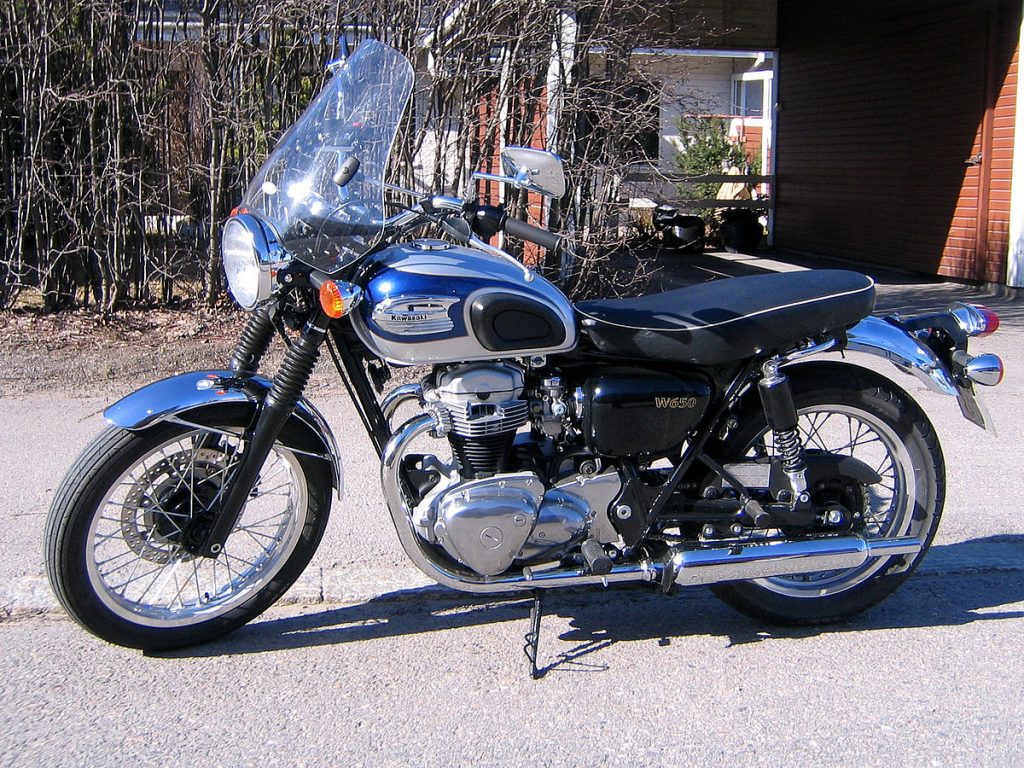 With the competition (the Bonneville) outing the Kawi bike from American markets in a scant two years and giving the UK version a run for its money until it dropped from dealership floors with the introduction of Euro-compliancy, we all knew Kawasaki was bound to come back swinging. 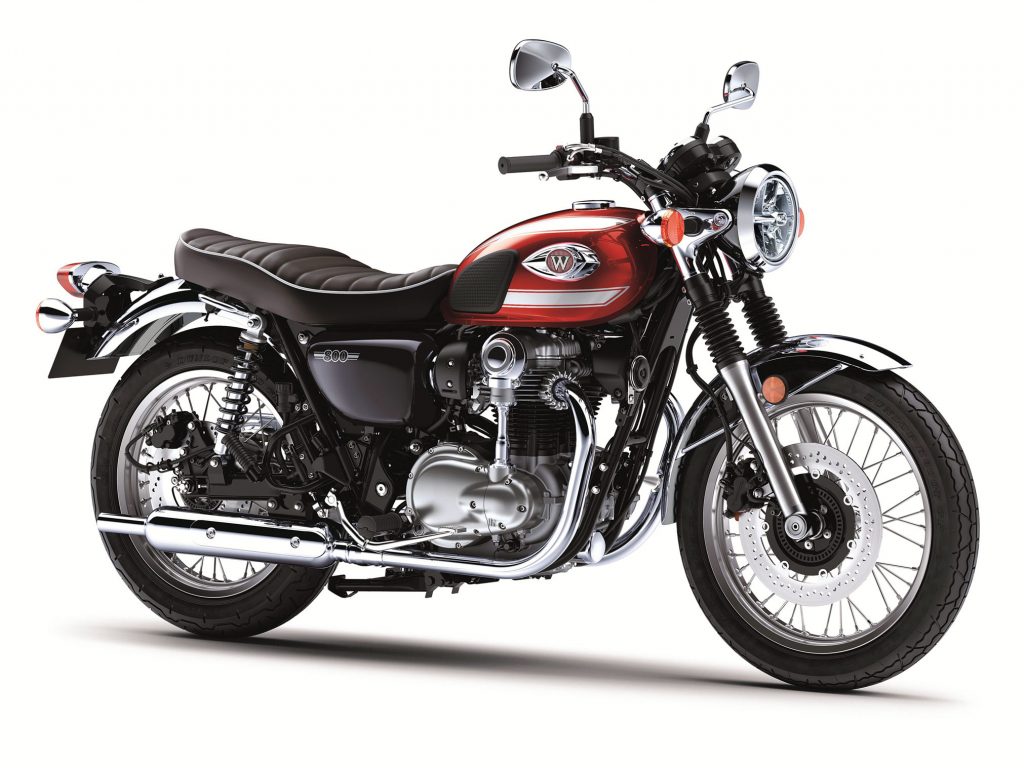 So, meet the 2022 Kawasaki W800 – a machine that’s gunning to go head-to-head against the Bonneville, with 100 more cc’s and the addition of fuel injection (and some pretty colors). 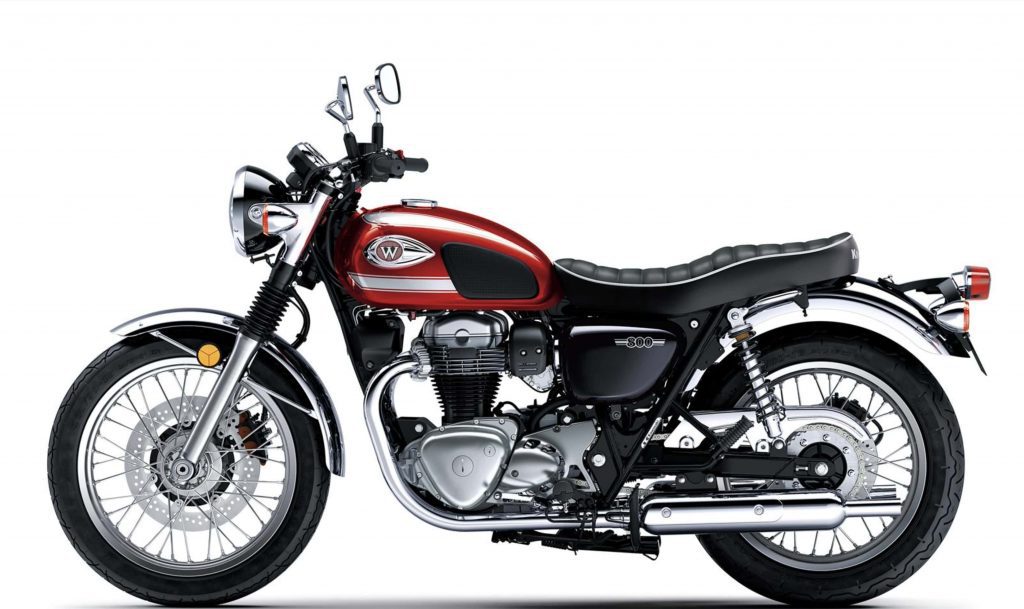 RideApart states that Team Green has given their 2022 W800 a new set of graphics schemes to complement the minimalistic handsomeness and lack of unnecessary features on the bike. “It’s a motorcycle, and it simply exists,” states the report – and considering the amount of Kawi fans in the UK raring to hop a leg over this machine, we’d say that’s pretty spot on. 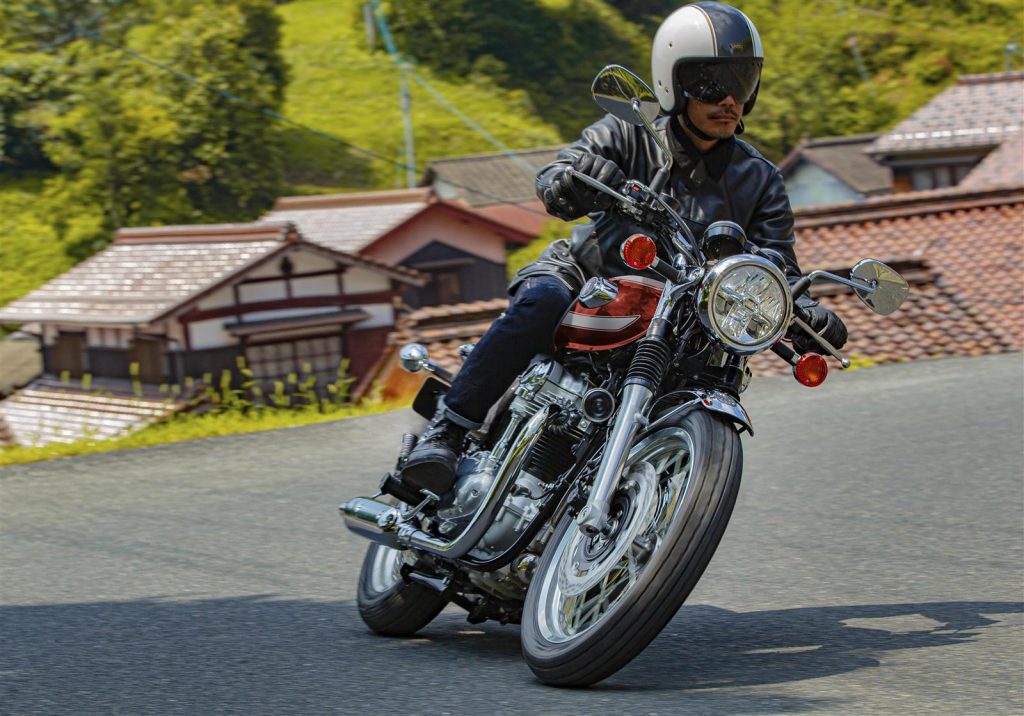 On top of the LED headlight and Euro5-optimized exhaust system, the Kawasaki W800 sports a 773cc parallel-twin complete with cooling fins and polished cases. That’s 48 pretty (slightly chubby) ponies pulling at the bit, with the feel of the bike best explained from the following review:

“The W800 is designed to be simple, straightforward, and mostly to play nice. In fact, it’s so well-mannered that I could easily recommend it as a starter bike. Think about it: it’s easy to maneuver and easy to control, which also makes it easy to learn on without being overwhelmed.” 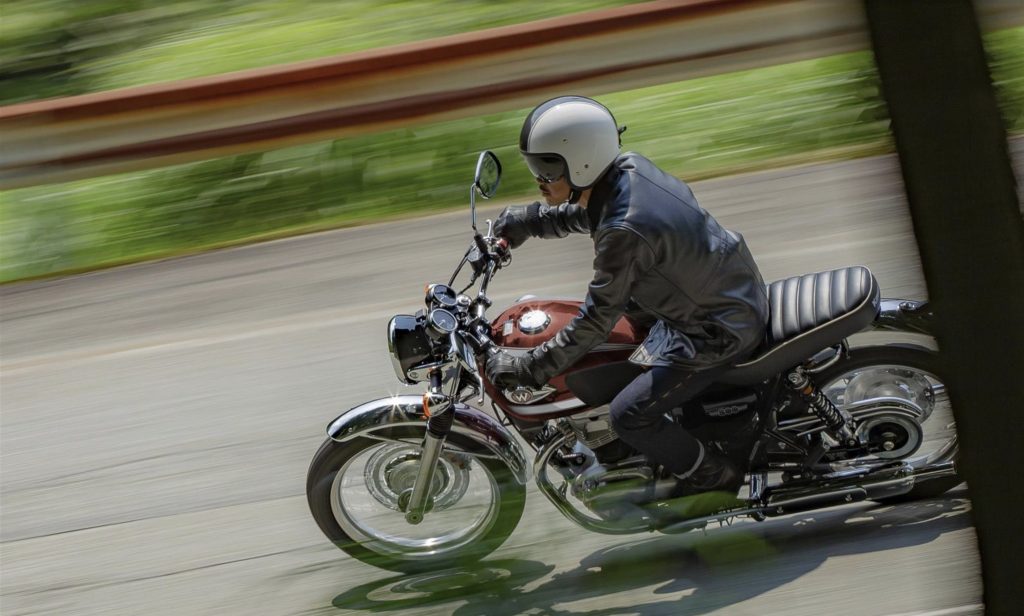 Due to the power displacement, A2 license holders will be able to take advantage of the W800, though we’ve yet to be given a heads up on the exact release date for the UK market. If you’re thinking of saving your pennies, expect to fork over something along the lines of €10,040 (the W800’s price in Italy, which translates to around $11,646 USD). 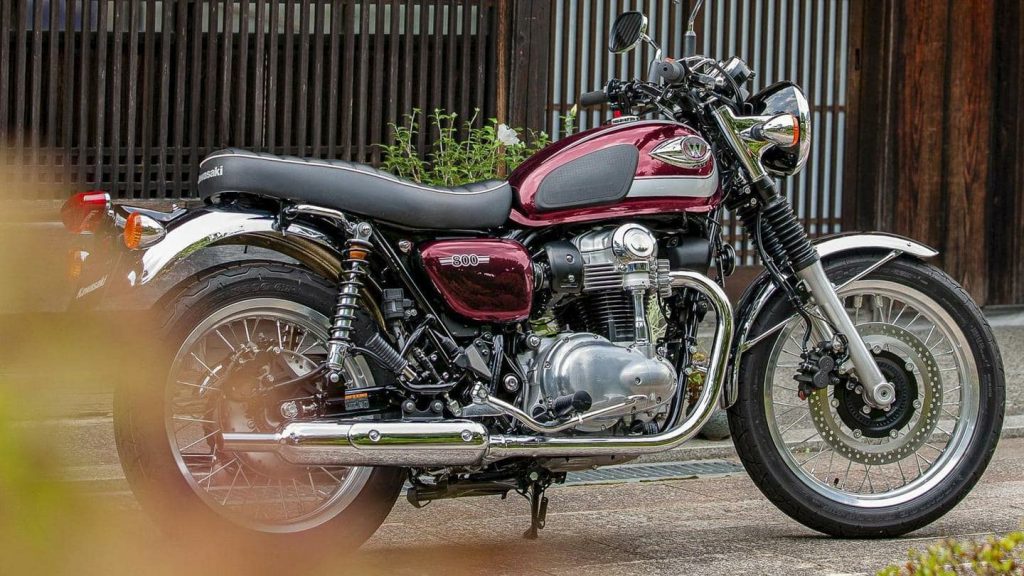 We’ll keep you posted as updates come our way; in the meantime, make sure to check out other fantastic bikes from Kawasaki’s current lineup. 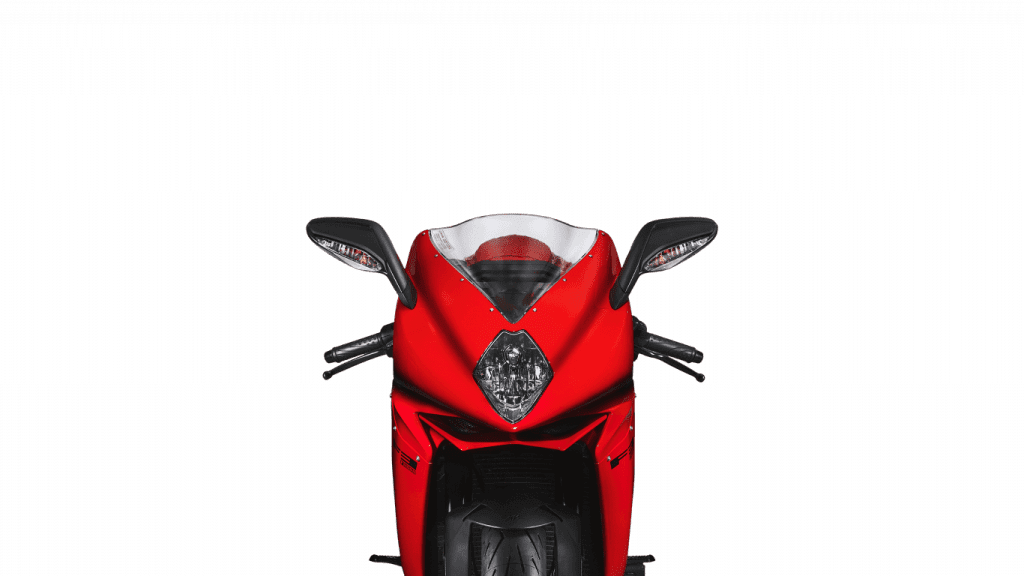 Agostini-red is the new black, and it is so scrumptious it’s practically edible.

According to a report from RideApart, The 2021 MV Agusta F3 Rosso made headlines in releasing their Euro-5 compliant supersport model on May 27th. With middleweight Supersports bikes being the new hype, MV Agusta came to play hard, and they kicked the proverbial ball out of the park with the F3 Rosso.

MV Agusta had the bike undergo a complete system overhaul to ensure compliance with Euro-5 emission standards, with a new bi-directional flow radiator that boasts an increase in efficiency by a cool five percent.

DLC treatments were applied to the valve guides, main bearings, rods, and countershaft to reduce friction for this model’s new update, and with the Agostini-red paint, the bike now looks like it can ride as fast as it sounds. 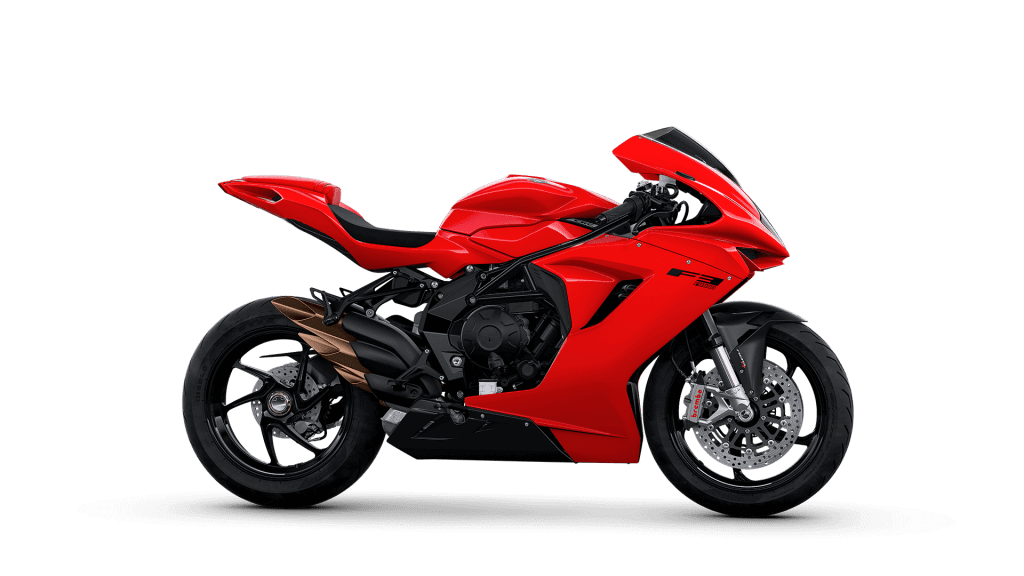 Other features of the 2021 update include a reinforced clutch basket with the addition of a third-gen bi-directional quick-shifter and a slew of new electronics, including an inertial platform and continental ABS with cornering function.

The traction and wheelie control has also been updated and detailed, along with a very pretty 5.5-inch TFT display that is fully compatible with the MV Ride App.

Under Euro-5 compliance, the gorgeous 800cc three-cylinder engine sports a counter-rotating crankshaft and grunges up a neat 147 hp at 13,000 rpm, with a maximum speed of 247 kmph / 153 mph. 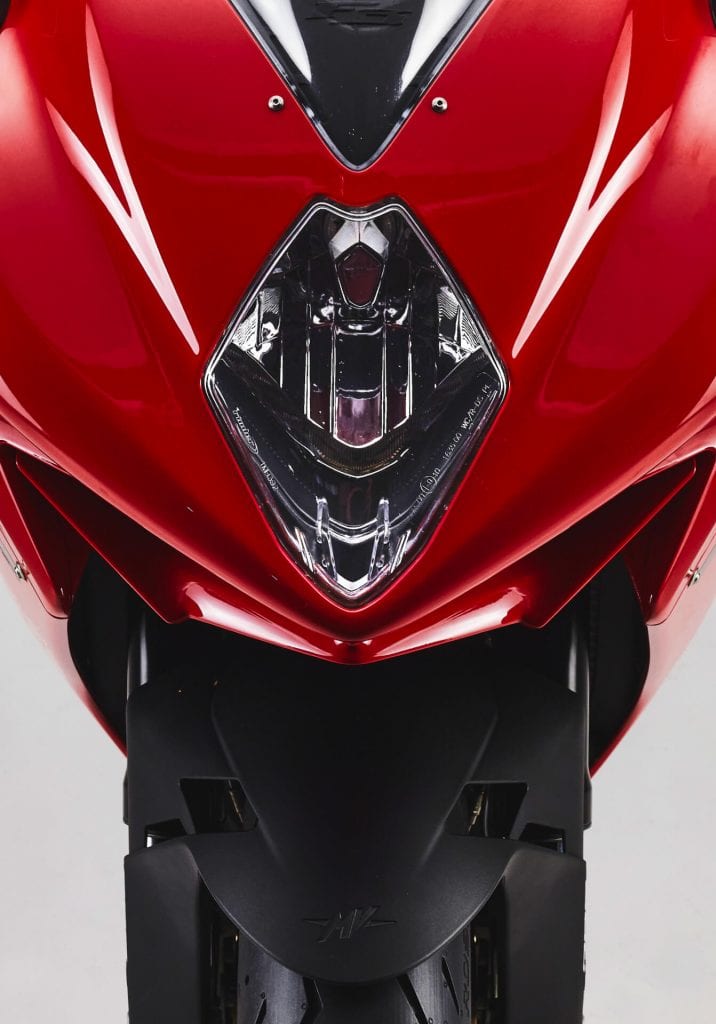 And that’s kind of the point, isn’t it?

Let’s take a quick look at this electric motorcycle. Technical specifications are impressive if they pan out as advertised. Fuell claims 48 hp (35 kW) and 553 pound-feet of torque from the Flow with a range of 150 miles and a top speed of 85 mph. It weighs in at a claimed 400 pounds and has a 53.9-inch wheelbase and rider-friendly 30.1-inch seat height, so it has potential to be fun while zipping around town or touring nearby back roads. Charging time will be 30 minutes using a Supercharger/CCS (Combined Charging System) but still will take a while (10 hours) using the home charging system, according to Fuell.

At the core of the Flow is a 10-kWh motor housed in the rear wheel hub, powered by a 400-volt “Li-ion cylindrical cell array housed in structural magnesium housing.” That configuration should provide plenty of pep to keep the bike ahead of traffic within the urban sprawl. The Flow spec sheet boasts a 0–60 time of 2.7 seconds, which would be slightly faster than its competitor, the Harley-Davidson LiveWire. Keep in mind the H-D carries an MSRP of nearly $30,000 and has been teasing an actual release date for what seems like an eternity.

Just looking at the images reveals the obvious Buell/EBR influence in the design of the Flow. The large magnesium monocoque frame, single-sided swingarm, and hub-center motor combine with the curvy Buell-esque bodywork to create the familiar look of this e-brawler. A 40mm inverted fork and preload-adjustable rear shock appear underwhelming at first glance, but are likely a couple of the inexpensive components that help keep the overall cost down. Time will tell where the other corners have been cut but it looks like Fuell has come up with a nice overall package that ticks all the boxes.

As it is stated on its website, the Fuell philosophy is: “To offer a unique selection of innovative, attractive electric two-wheeled vehicles.” And as they say, beauty is in the eye of the beholder, so we will let the public make its own opinion on the aesthetics of the Fuell Flow. But there is no denying the potential value of the Flow compared to other electric motorcycles.

The Flow incorporates onboard safety technology including blind spot detection, anti-collision, ABS with regenerative braking, plus a rear-facing camera, e-traction control, and an array of high-tech gadgets including what appears to be a large TFT-type dash that is the size of an iPad.

Check out the Fuell website at fuell.us for more details, and if you are interested in getting on board the Fuell e-mobility express in the early stages, the company is offering a $500 discount if you preorder your Flow now.

Morocco’s Merzouga dunes sit on the edge of the Sahara Desert; it’s been a film location for several blockbuster movies, is a source of hundred-million-year-old fossils in marble, and KTM uses the area for rally testing and training. With 18 consecutive Dakar Rally wins, the location works. KTM has also chosen this rocky and sand-strewn location for the introduction on the 2019 KTM 790 Adventure R. A bold move that infers a high off-road capability of the top-shelf R model.

Much wringing of hands and checking of finances by KTM fans and serious off-road adventurers had resulted from the 2017 EICMA prototype unveiling. Would it be the one? Could it be the one? The specs suggested yes; the marketing practically guaranteed it; the forums were ablaze with arguments for and against. November 2018 saw the production model unleashed on the public. Hopes were high; the package didn’t differ much from the year before. Maybe that prototype was not really a prototype? It didn’t matter; it was coming and it would be a hit or a massive miss.

Blasting across the desert hot on the heels of KTM adventure wizard and superstar Chris Birch, all I could mutter to myself for the first few miles was, “Unbelievable.” Cutting to the point, it’s as close to rally promise as any KTM Adventure has ever achieved. Bull’s-eye. Hero status is imminent—a qualified successor to the legendary 990 Adventure. Its larger siblings are irrelevant when viewed from behind the handlebars of the 790 Adventure R.

While the 799cc LC8c parallel twin is impressive in its torquey power delivery (and V-twin-like sound) and its lean-sensitive traction control, uncanny ABS functions, and multiple ride modes are better than the rider can ever be, it is the 240mm of WP Xplor suspension that steals the show. Sprung stiffer than a 1290 Super Adventure R, with larger valving combined with a lighter 460-pound wet weight make for nearly enduro or dual-sport levels of capability. The line between a KTM EXC-F and the 790 is closer than any before it.

Attacking the Merzouga sand dunes highlighted the dirt bike-like handling and ergonomics of the 790 Adventure R. It’s a weapon. Yamaha’s 700 Ténéré had better be good—real good to compete with the new king of extreme adventure.

Styling of the 790 Adventure R is the only real miss. But that is okay, from the seat you can’t see the funky beak and bulbous fuel tank. But you can feel the slim tank and seat area and the low center of gravity thanks to the low-slung mass of the tank. As is often the case for KTM, form follows function.

Watch the video below for all the details, but know this: The 2019 KTM Adventure R is the new high-water mark for serious off-road adventure motorcycles. All other midsize ADVs may have just become off-roading fossils.

After months of teasing out aspects of its new model, the day has finally arrived. Lightning Motorcycles officially launched the Strike, an electric sportbike with a variety of configurations to match both budget and ride style.

The standard Strike will start at $12,998 and features a 10-kWh battery and AC induction motor which promises 90 hp, 180 pound-feet of torque, and a top speed of 135 mph. This battery will offer a range of 70/100 miles highway/city and come with Level 1 and Level 2 charging options. Level 1 provides a full charge overnight from a standard 110-volt outlet at home, while Level 2 offers a full charge in two to three hours at any J1772 public charging station. Level 3 fast-charging and a more efficient onboard charger (from 3.3 kilowatts to 6.6 kilowatts) are options for the standard strike, but each upgrade will cost $1,500 a piece.

The Strike Carbon is the best of the best, with a 20-kWh battery capable of 150/200 miles highway/city. It’s got 120 hp and 180 pound-feet of torque, all three charging inlets, and the 6.6-kilowatt onboard charger. Regarding other elements of its build, the Strike Carbon will also come with the Lightning Performance Package. That means Öhlins suspension throughout, Brembo braking kit, and an AIM Strada racing dash. It weighs 485 pounds, will price at $19,998, and be the first version of Strike to be delivered to customers starting July 2019.

The standard Strike can be upgraded with some or all of the performance parts included on the Carbon.

Engineers sought to make the Strike as aerodynamically efficient as possible, so devised its sportbike look through wind tunnel testing to help reduce drag and thereby improve range. The rider triangle was developed more for street riding, with an emphasis on comfort and broader usability. It’s more open and natural than the ergos of Lightning’s LS-218 superbike, which provided inspiration for the Strike.

To help keep people from looping the Strike and its 180 pound-feet of torque when the light turns green, Lightning refined throttle response to provide predictable and manageable power. There’s no specifics as to exactly how power delivery will be managed in today’s news, however.

Will the appeal of this Silicon Valley-engineered sportbike part you with your hard-earned cash? We’d love to hear your thoughts in the comments.