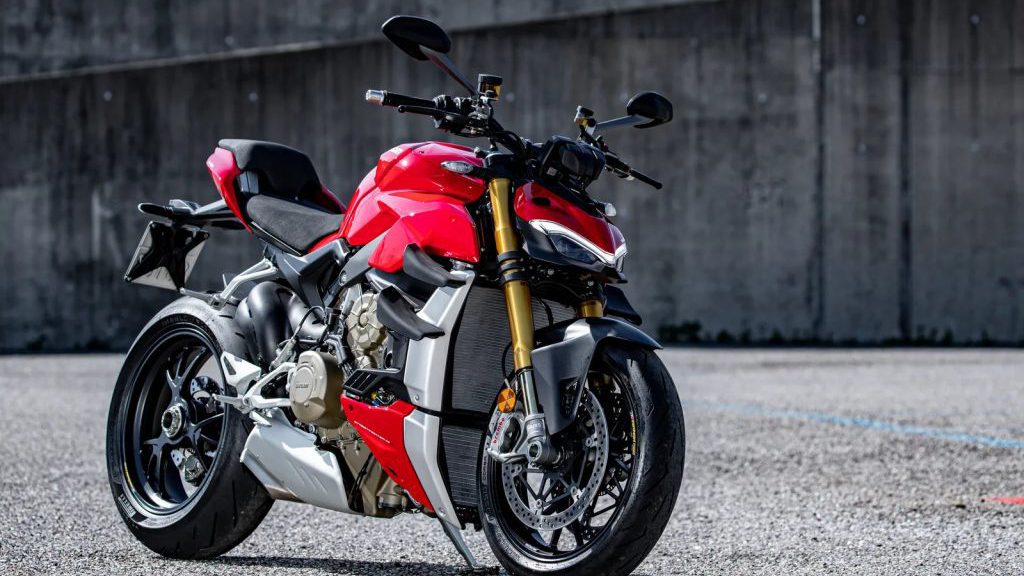 If there’s one thing Ducati is good at, it’s putting a big price tag on a pretty engine – and they’ve started work on a new SP model.

According to a report from MCN, a set of American Emissions Documents has given away the fact that Ducati is in the works of making an SP version of their popular Streetfighter V4 S.

While this may not come as a complete surprise, the exact details on what is getting updated have yet to be released.

Despite this, we can still compare the information we have been given against the other SP Ducati models to guesstimate updates that will be installed under the proverbial hood.

We’ve been told the power and range of the hyper naked will be the same, which means the shiny bits of new technology that inevitably follow every Ducati release will be the buggers contributing to the steep price tag.

Suppose the updates are anything like the Panigale V4 SP model that Ducati released.

In that case, we’ll be getting a very lovely set of Stylema R calipers, an MCS master cylinder, carbon fiber wheels, and probably something like a dry clutch conversion to keep the traditional Ducati rumble and roar. 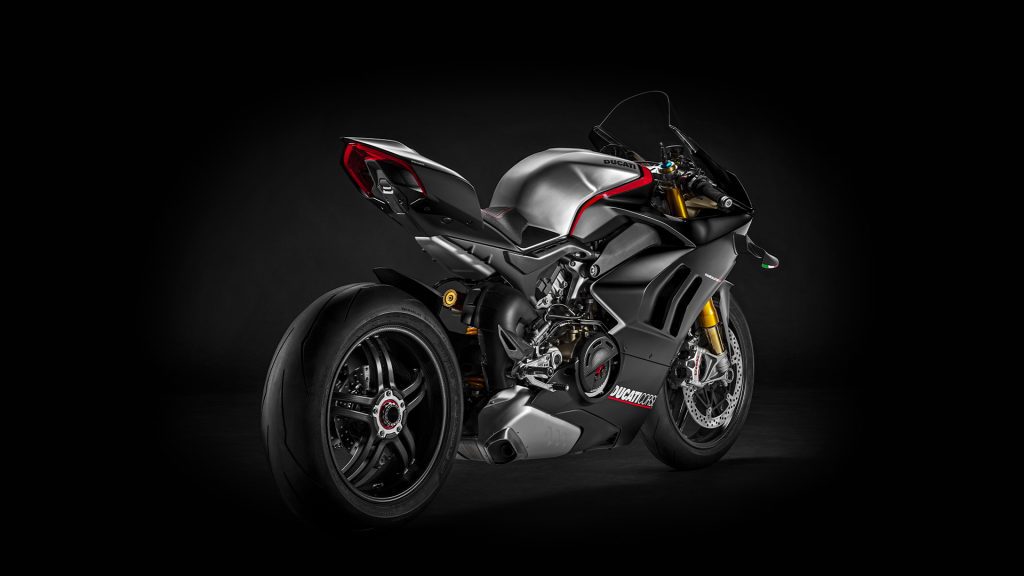 Expect the Streetfighter V4 SP to have a similar rise in price and for the release of the bike to hit later this year, given the EICMA tradeshow (the probable location of the new Streetfighter V4 SP reveal) has purportedly been delayed until November due to ongoing restrictions.
We’ll keep you posted, so make sure to check back regularly!

Ducati have announced a new Dark Stealth colour scheme for the Streetfighter V4 S for 2021, which will join the more traditional Ducati Red option, as the full Streetfighter V4 range becomes Euro5, without any loss of performance. Other changes include new self bleeding front brake and clutch master-cylinders.

The Streetfighter is based on the the Panigale V4, stripped of the fairings, with a high and wide handlebar, weighing 178 kg on the scale, and powered by 1100 cc Desmosedici Stradale offering 208 hp and kept in hand by biplane wings, alongside a complete electronic package. Dark Stealth is the matt black colour option aimed at offering a blacked out theme, a long running crowd favourite amongst motorcyclists.

With the arrival of 2021, all the bikes in the Ducati Streetfighter V4 range become compliant with the Euro 5 anti-pollution regulations, maintaining maximum power and torque values ​​unchanged, but repositioned at different engine speeds. The Streetfighter V4 Euro 5 will have a power output of 208 hp (153 kW) at 13,000 rpm (250 rpm higher than the EURO 4 version) and a torque of 123 Nm at 9,500 rpm (2,000 rpm lower than the EURO 4 version). These values have been obtained thanks to a new calibration and new exhaust system.

The silencer, unchanged from an aesthetic point of view, uses larger catalysts (+10 mm in length) and with a new technology of impregnation of noble metals, essential for maximising the ability to convert polluting gases. The lengths and dimensions of the exhaust primaries of the rear bank have also been optimised to minimise the ignition time of the catalytic converter, while maintaining engine performance unchanged.

Compared to the Euro 4 models, the manifolds of the rear bank have been shortened by 100 mm and reduced in diameter, going from 42 mm to 38 mm. The new component allowed the introduction of a more compact rear heat shield integrated into the body of the bike. With the aim of limiting emissions is the introduction of four lambda probes, one for each cylinder, which allow a more refined control of the amount of injected fuel.

All Streetfighter V4 models in the 2021 range are fitted with new front brake and clutch pumps, both self-bleeding and derived from those used for the first time on the Superleggera V4. The body of the new pumps has been designed with a configuration that allows a ‘natural’ bleeding, thus eliminating the need to intervene on the system in the event of air present in the circuit.

The entire Streetfighter V4 range for 2021, including the Dark Stealth colour scheme for the “S” version, can now be ordered in Ducati dealers and will be available starting from November 2020, with Australian pricing of the Streetfighter V4 starting at $29,500 Ride-Away. More information is available at https://www.ducati.com/au/en/

A Motorcycle So Clean You Could Consider It ‘Filthy’

Fully black liveries are nothing new in the motorcycle world. Many riders love to pair their fully blacked-out bikes with a black racing outfit for the maximum ‘road intimidation factor’.

If you’re in the market for a Ducati Streetfighter V4 S and aren’t too keen on spending thousands of dollars blacking out the entire motorcycle yourself, Ducati is breaking free from their addiction to all things red and providing a full black livery option for the 2021 Streetfighter.

When I say “blacked out” I really mean it. Almost every piece possible on this motorcycle has joined the black team. You can still find a handful of parts adorned in silver; the exhaust, radiator, pegs, and steering stabilizer – but beyond that, every piece of the motorcycle has been shrouded in evil greatness.

Personally, I want my Ducati in the traditional red colour so anyone who sees me riding it will know I re-mortgaged my house to ride the Ferrari of the superbike world. But if you’re a modest adult – unlike myself – this is an absolutely beautiful colour option for the motorcycle.

This colour option will only be available on the S version of the Streetfighter V4, and comes with an additional $391 USD fee when buying the bike new.

The 2021 edition of the Streetfighter V4 includes some new engine upgrades to make it Euro5 compliant (sigh), but Ducati wants customers to be reassured that it still produces a neck-snapping 208 horsepower from its 1,103cc V4 engine.

The motorcycle will get into the hands of dealers in November of this year, so let’s hope it comes winterized so you can enjoy your maiden-voyage ride come spring next year.

It has perhaps took a little longer than expected but Ducati have finally taken the covers off of the new Ducati Streetfighter V4 and V4 S.

An optional Akrapovic full exhaust system can up those numbers to 220 horsepower and 130 Nm while knocking six kilograms off the scales.  Just be aware that fitting said exhaust will likely require more than ten hours of labour due to the V4 lay-out, so figure the fitment into your bargaining if that’s what you have your heart set on when signing the paperwork at your local Ducati dealer!

Showa and Sachs provide the suspension for the Streetfighter V4 while the V4 S gets electronically-adjustable Ohlins at both ends.

The geometry is the same across both bikes and both can take a pillion.

A single wide handlebar that offers more friendly ergonomics than sportsbike clip-ons are a nod to rider comfort, as are lower pegs than Ducati’s sportsbike brethren and a much thicker seat with 60 mm of padding. Seat height is 845 mm.

The two bikes also roll on different rims with the S getting forged Marchesini gorgeousness.

Wings come to nakedbikes! That’s right, Ducati have put wings on the Streetfighter and claim they increase stability markedly and produce as much as 28 kg of down-force when you head to the cafe at 270 km/h.

A top spec’ six-axis IMU controls an extensive electronics suite that graces both Streetfighter models as does 5” TFT instrumentation lifted from the Panigale V4.

Riding modes change throttle response and power matched to relative traction and abs settings. Full power is available in Race and Sport modes while Street pegs it back to 155 hp. Riding modes also change the attitude of the electronic suspension on the S.

No word yet as to Australian arrival dates or pricing.