The Red Bull MotoGP Rookies Cup took to Jerez over the weekend for their second round, alongside the Gran Premio Red Bull De Espana, where Daniel Holgado wrestled the lead from David Alonso across two hard fought races, with David Munoz also claiming a race win.

Double victor in Portimão, Colombian 15-year-old David Alonso carried his great form to Jerez and after being fast all day found that little extra late in Qualifying to put himself on Pole.

The trio looked to be the class of the field through Friday but were joined in the final session by Italian 16-year-old Filippo Farioli, fourth fastest.

When the first Red Bull MotoGP Rookies Cup race kicked off, it was a ten man battle for the lead on the KTM RC250 Rs. The intensity built over a shortened 10 lap race, following a red flag due to technical issues with the starting equipment.

Holgado was in great form and despite being under pressure and being passed several times. The 16-year-old Spaniard seemed to have the answers as countrymen 14-year-old David Muñoz and 16-year-old Ortolá snapped at his heels.

Brazilian 17-year old Moreira was equally determined, while 15-year-old Colombian Alonso seemed content just to be in a good, top-six position ready for a play in the final laps.

As usual at Jerez it did come down to the final corner and the ten riders all elbowing and lunging for the lead with David Muñoz doing the best job and Holgado going from first to fourth.

“I’m very happy for this race and victory, Jerez is my home race. I am ready to try and do the same thing again tomorrow, I know it will be very difficult again but I am very focussed. Today it was a very hard and difficult race, everyone was pushing so hard but I believed I could win it. The bike was great, very happy with that and no need to change anything for Sunday.” 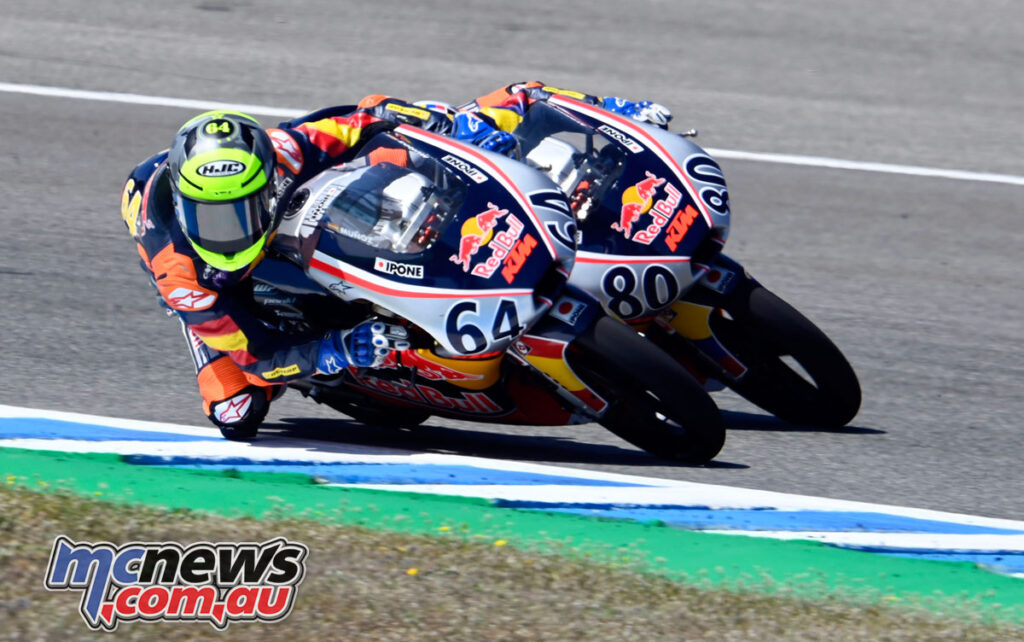 A dramatic Jerez round of the Red Bull MotoGP Rookies Cup ended with victory for Daniel Holgado. He fought off all-comers at the final corner to cross the line first, several of whom had long lap penalties, meaning ultimately second went to Diogo Moreira ahead of Alex Millan.

Points leader David Alonso was one of those with the penalty and that dropped him to eighth and cost him enough points to give Holgado the Cup lead, by four-points.

It had been a great KTM RC 250 R battle from the start and again a lead group of 10 traded places at every turn. Holgado did most of the leading just as he did on Saturday only to lose out on the last lap.

This time he managed to break away slightly in the second half of the race chased by Moreira. But in giving chase Moreira had exceeded track limits too many times.

Moreira took his long lap penalty with six laps to go but incredibly fought back and made a lunge for the lead on the final lap. That didn’t work but he was in the lead group at the line and took second when Alonso and David Muñoz failed to take their late penalties and were given three-second penalties post race.

“This race was incredible for me. Difficult but I am happy for me and my team. Today the difference was the last corner, yesterday it was very difficult for me but today, much better. The bike was great today, we made a very good set-up and it was fun to ride. The track conditions were difficult with the temperature but I could manage the situation, I enjoyed the race and am ready for the next in Mugello. I believe that I can win there again.”

“The race was very good, I enjoyed it a lot. When I saw I had a long lap penalty I knew I had to do it as soon as possible. After I did it I knew I had to get with the group again for the last laps. On the last lap I tried to win the race but I didn’t, that’s racing and I’m happy. Jerez is my favourite circuit, from FP1 I was fast and I enjoyed it from the start. All weekend I tried to make my laps alone so that I would have the best chance to win the race and I tried to escape the group but I am still happy with the weekend. Mugello I have never ridden before, I need to try and win the race.”

Harrison Voight had a better second race of the weekend, improving to 12th, while New Zealand’s Cormac Buchanan took his best Rookies Cup result yet with P18 in Race 2.

“A weekend where I experienced the highs and lows of this sport. I’m aware of what needs to be fixed and I’m determined to come back stronger after Valencia. Thanks to everyone who’s made this possible and I’m looking forward to next week with the team SIC 58 Squadra CORSE.”

“Absolutely rapt to earn my best finish to date in the Red Bull MotoGP Rookies Cup here at the legendary Circuito de Jerez. It sure was a drama-filled race but i managed to keep it shiny side up and tight enough to stay off the green stuff! Full credit to Dad Stacey Buchanan and my mechanic Aleix for making some beneficial changes to the set up and the whole Rookies Cup crew for having our backs. We’ve had a blast here in Spain but time to start another phase of this adventure. Massive thanks to those who make this a reality for me.”