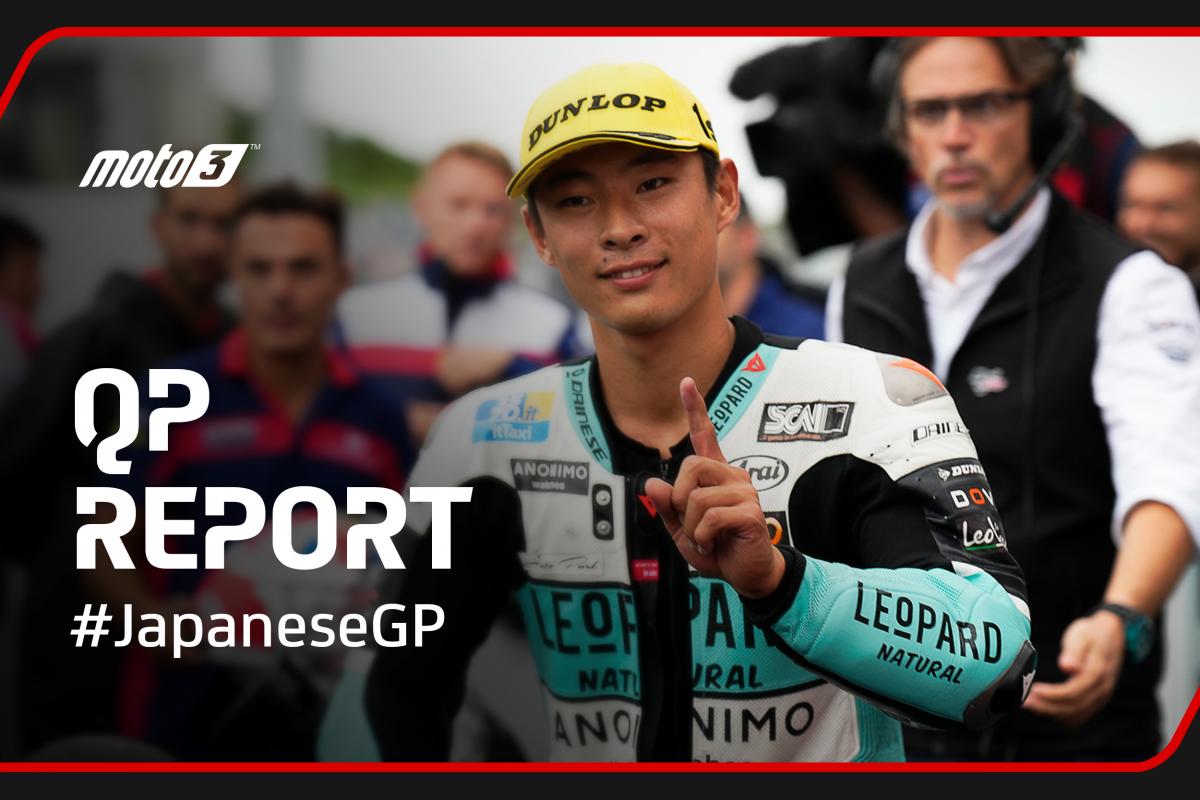 Leopard Racing’s Tatsuki Suzuki has secured a cherished home Moto3™ pole position at the Motul Grand Prix of Japan. Riding his Honda at the Japanese marque’s own test track, Suzuki went as fast as a 2:11.246 in a rainy Q2 at the Mobility Resort Motegi. Scott Ogden (VisionTrack Racing Team) and title contender Sergio Garcia (Autosolar GASGAS Aspar Team) both came from Q1 to get onto the front row, although the latter might yet lose third position after it looked as though he held up World Championship-leading teammate Izan Guevara and Suzuki following a crash. Guevara qualified ninth on his own Autosolar GASGAS Aspar Team entry.

Suzuki delivers for Honda in Japan

Rain continued to fall over Motegi and, having shown good pace in wet conditions in the morning’s FP2 session, Suzuki was on it again in Q2. The birthday boy – he turns 25 today – went fastest with a 2:12.037 on his second flyer and was down to a 2:11.246 just two laps later. The Japanese rider looked like going even faster again next time through, with red splits in each of the first three sectors, before checking in at a time of 2:11.675. As it turned out, he and Guevara happened upon Garcia towards the end of the lap after the Aspar rider had remounted from a crash at Turn 7.

Garcia was, at that point, second-quickest on a 2:11.788 and he was still provisionally on the middle of the front row when the chequered flag came out. Then Ogden, who had topped Q1, came through to clock a 1:22.568 and jump from sixth to second. Ayumu Sasaki (Sterilgarda Husqvarna Max) was a late improver to fourth with a 2:11.942, ahead of Dennis Foggia (Leopard Racing) on a 2:12.015 and Andrea Migno (Rivacold Snipers Team) on a 2:12.038.

Earlier, in Q1, Taiyo Furusato (Honda Team Asia) set the initial pace on a 2:12.749 but was unable to improve on that lap time and would be shuffled back to fifth for the session, equating to 19th on the starting grid. He will be joined on Row 7 by Ivan Ortola (Angeluss MTA Team) and Daniel Holgado (Red Bull KTM Ajo), the rookie who had scored his first Grand Prix podium just five days earlier at Aragon. Mario Aji (Honda Team Asia) qualified 32nd with a 2:14.763 which he set after an early crash at Turn 3.