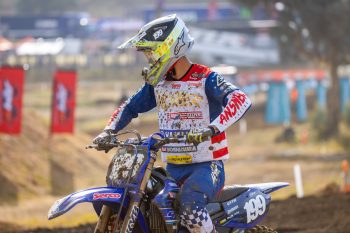 Serco Yamaha has revealed a misfire issue is what forced MX2 contender Nathan Crawford to withdraw from the opening moto at Canberra’s second round of the 2021 Penrite ProMX Championship.

Crawford’s YZ250F starting developing symptoms just one lap into the 17-lap encounter, prompting him to exit the outing and record a championship-damaging DNF. It’s understood the outfit is still investigating the problem.

Equipped with his spare bike for moto two, the popular Queenslander rebounded for a much-needed P2 result, however his points deficit to undefeated championship leader Kyle Webster (Honda Racing) sits at 40 just two rounds into the series.

“Today was a bit frustrating, but sometimes things like that are out of your control and the team did everything they could to fix the issue,” Crawford explained. “We still aren’t sure what caused it but I know the guys will be all over it in the workshop during the week and work out exactly what happened to ensure it doesn’t happen again.

“But it was important I scored good points in race two, and I was able to do that. It took me a while to get going as I hadn’t been on the track for so long and I had to search for the lines I liked, but once I settled down, my speed was pretty good and I was able to get to second.”

Crawford is ranked fifth in the MX2 championship standings as ProMX heads to Gillman in South Australia on 30 May, marking the third stop on the calendar.