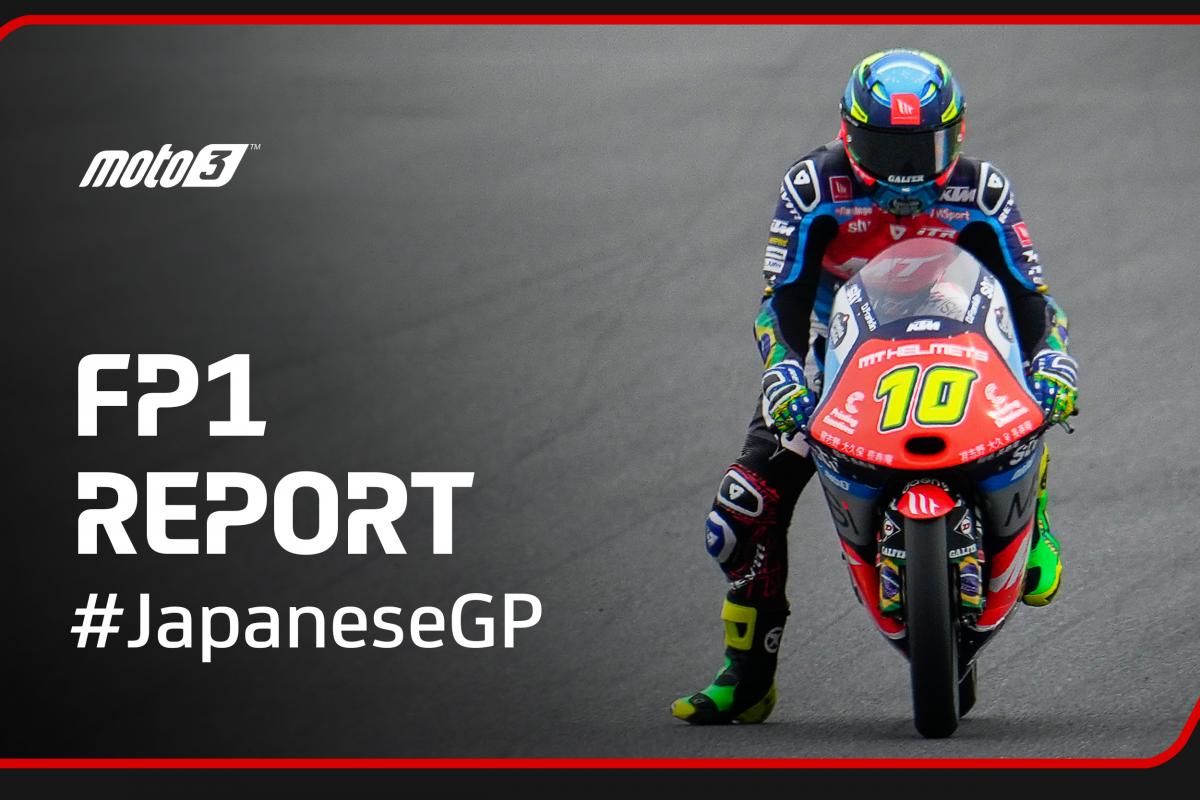 MT Helmets – MSI’s Diogo Moreira has set the pace in FP1 for Round 16 of the Moto3™ World Championship, the Motul Grand Prix of Japan. Moreira went as quick as a 1:57.252 in the first, 40-minute session around the Mobility Resort Motegi, finishing ahead of Leopard Racing’s Dennis Foggia and one of the Japanese riders in the field, Sterilgarda Husqvarna Max’s Ayumu Sasaki. World Championship leader Izan Guevara sits inside the top 14 cut-off for Q2 as it stands, but fellow Autosolar GASGAS Aspar Team rider – and title rival – Sergio Garcia went 17th-quickest in FP1 and will be hoping for dry conditions on Saturday morning.

Despite overnight rain and grey clouds hanging overhead, it was indeed dry for the start of the Friday afternoon session, which is the only running for the lightweight class today due to the special timetable for the Japanese GP. Jaume Masia was the early pace-setter and the Red Bull KTM Ajo rider got his lap time down to a 1:58.069 before returning to the pits to bring an end to his first run. Ryusei Yamanaka (MT Helmets – MSI) had an early off in the opening session of his home grand prix when he ran into the gravel at the Hairpin (Turn 10) to go quickest with a 1:58.097 just past the halfway mark, but that effort was quickly bettered by Guevara’s 1:57.664.

Sasaki gave the home fans reason to smile when he set a 1:57.493 in the fjnal three minutes but, with the chequered flag out, Foggia shot up from the danger zone of 14th position to go fastest on a 1:57.447 before Moreira crossed the stripe in a time of 1:57.252. Sasaki was therefore classified third, ahead of David Muñoz (BOE Motorsports) on a 1:57.565 and John McPhee (Sterilgarda Husqvarna Max) on a 1:57.585.

How the rest of the top 14 looks

Tatsuki Suzuki (Leopard Racing) claimed sixth on a 1:57.610 and while Guevara had a 1:57.662 scratched due to breaching track limits, the earlier lap time saw him take seventh, ahead of Riccardo Rossi (SIC58 Squadra Corse), Andrea Migno (Rivacold Snipers Team), and Yamanaka. Deniz Öncü (Red Bull KTM Tech3) finished 11th, with the rest of the top 14 being Kaito Toba (CIP Green Power), Adrian Fernandez (Red Bull KTM Tech3), and Jaume Masia (Red Bull KTM Ajo). Daniel Holgado (Red Bull KTM Ajo) was something of a surprise omission from the provisional Q2 places as he finished 16th on a 1:58.248 and Garcia was 0.170 seconds slower again. Lorenzo Fellon (SIC58 Squadra Corse), meanwhile is off to the medical centre for a check-up due to pain in his foot after a late crash at Turn 13.

The second and final Free Practice session gets underway on Saturday morning. Tune in from 09:00 (GMT +9)!