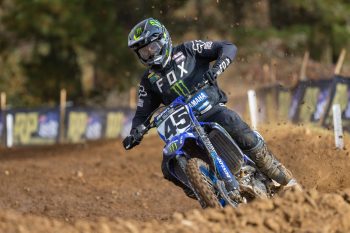 CDR Yamaha Monster Energy’s Hayden Mellross insists there’s ‘more to come’ after claiming his first podium since July 2019, his runner-up result at Canberra’s second round of the 2021 Penrite ProMX Championship coming as a huge relief to the number 45.

Mellross was in title contention during the 2019 season before a knee injury at the closing rounds ruled him out of supercross that year, and along with racing being cancelled altogether in 2020, it meant the New South Welshman went almost two years without experiencing podium success at a national level.

The 25-year-old, who grew up in Goulbourn near Canberra, put on an impressive display in front of a home crowd as he charged to fourth in the opening encounter, however he really came into his own during the pair of back-to-back 13-minute plus one-lap motos, where he went 3-3 for second overall.

“It’s been too long since I stood on a podium at a national event,” said a relieved Mellross. “With Covid and injuries, it’s been a long time between podium visits, so I’m glad to finally get back up here and reward myself and the team for the hard work we have all put in behind the scenes.

“Today was an improvement on Wonthaggi as my speed was better. My starts weren’t what they needed to be, but I will work on that and hopefully put myself in better positions to win races at the next round.

“The more racing I’m able to do, the better I feel as I missed a large chunk of the pre-season with injury. I feel there is still more to come and think there is room for improvement as we head into Adelaide.”

The runner-up result promoted Mellross to third in the championship standings, one position ahead of team-mate and Canberra overall winner Luke Clout (Monster Energy CDR Yamaha).