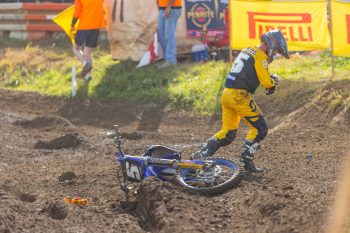 WBR Yamaha Race Team’s Alex Larwood was hospitalised following a moto two collision in Canberra’s second stop of the 2021 Penrite ProMX Championship, where a dislocated shoulder now puts him in a race against time for his home round in South Australia at the end of the month.

The MX2 rookie collided with Yamaha counterpart Jay Wilson (Yamalube Yamaha Racing) in the early stages of moto two, crashing heavily and dislocating his shoulder in the process.

The teenager was initially treated by the Race Safe Medical Crew, however was forced to seek further medical treatment at the hospital for his shoulder to be repositioned in place.

Larwood, who finished 14th in the opening moto, is hopeful of making a swift recovery in the coming weeks, with his home round at Gillman set to be staged in just under four weeks’ time on 30 May.

“I got off to an awesome start, and I was running around sixth and just got by Rhys Budd and then I passed Jay Wilson as well,” Larwood told MotoOnline.com.au. “As soon as I passed Jay, in the next corner – going by the mechanic’s pit lane where they had that single – and Jay sort of not jumped into me, but we collided and I got taken down.

“I dislocated my shoulder and Race Safe couldn’t get it back in, so I had to go to hospital and get it popped back in there. I reckon I should be fine [for Gillman], I’m going to see Jon [Park] tomorrow and start physio – hopefully everything goes to plan and I can be back for round three at my home track.”

The number five recently beat MX2 points leader Kyle Webster (Honda Racing) – who’s undefeated in ProMX this season – at the Gillman venue in a South Australian Motocross Championship event, although his current injury cloud puts him doubt of repeating the feat on a national stage.