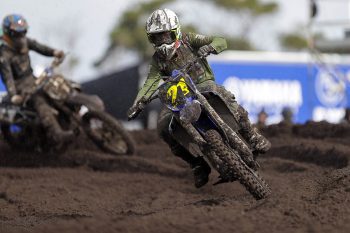 Teenager Ryder Kingsford and Victoria’s Dylan Long both claimed round wins on countbacks in the MX3 class and 125 Cup at the 2021 Penrite ProMX Championship opener at Wonthaggi, today.

In the second race, Kingsford grabbed the holeshot, but Fox quickly made his move to the front. Unwilling to be intimidated by the older racer, Kingsford followed closely behind before retaking the lead as Fox lost his rhythm, and led the rest of the race, holding off a late charge from Fox to take the round overall on countback.

The youngest rider in the field, Minear, finished the second moto in third, followed by Drew and Novak.

Kingsford took the overall, from Fox, with Drew rounding out the podium.

In the 125cc Cup, Australian Off Road racer Jack Simpson proved he still has talent on the motocross track as he cruised to a 31-second race victory in the opening moto.

Long took the overall ahead of Simpson, with McLean finishing off the podium.