Iconic combination aligns for round two of ProMX Championship. 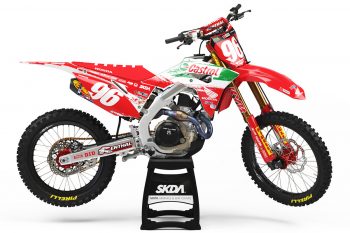 The Honda Racing CRF250R of MX2 red plate-holder Kyle Webster will wear a Castrol livery this weekend in Canberra as part of a rotating commercial package.

Webster’s bike was in Delcon Civil branding at Wonthaggi’s opening round when he completed the double to open the 2021 season, now adopting the iconic Castrol Honda colours.

“Honda has had great success with Castrol in motorcycle racing for a very long time and I am proud to carry on that tradition with my Castrol CRF250R,” Webster commented.

Honda Racing team director Yarrive Konsky added: “Castrol’s global success is unmatched in motorsport and they have achieved local and international success with Honda, so it was a no brainer partnership. Plus, we believe in their product – that’s the key.”

For Castrol national motorcycle brand manager Duncan Hale, the opportunity to align with Honda Racing and Webster with an increased presence for round two of the ProMX Championship was an ideal one.

“Castrol is a proven product in MotoGP, motocross and supercross, as well as in F1,” Hale stated. “The strategic alignment with the factory Honda Racing team in Australia is important to Castrol. It gives our range credibility, especially if Honda chooses to use it in their factory motorcycles.”

While Webster’s entry has moved across to Castrol for this weekend, Brett Metcalfe will maintain Mongrel Boots and Kirk Gibbs Terrafirma Equipment Sales in Honda Racing’s MX1 program.