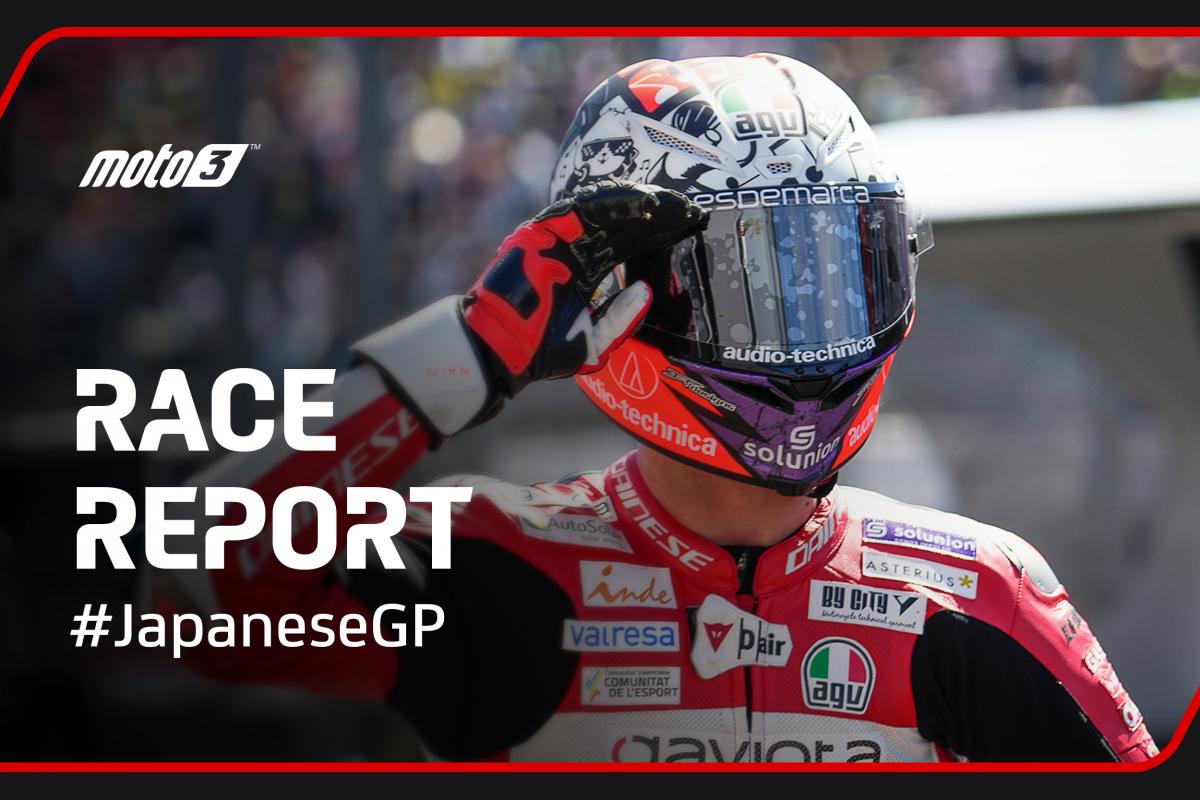 Izan Guevara has further tightened his grip on the Moto3™ World Championship after prevailing in a four-way battle for victory at the Motul Grand Prix of Japan. The Autosolar GASGAS Aspar Team rider qualified only ninth and then had a nasty near-miss with the fence when he crashed in the Sunday morning Warm Up session at the Mobility Resort Motegi. That left him with a bent chassis for the 20-lap race itself, but he still came out on top of a podium completed by Dennis Foggia (Leopard Racing) in second and Japanese rider Ayumu Sasaki (Sterilgarda Husqvarna Max) in third. With teammate Sergio Garcia finishing fourth, Garcia’s Championship lead is now 45 points with four races remaining in 2022.

Guevara drops the hammer at the start

Tatsuki Suzuki (Leopard Racing) had qualified on pole position and he led the field down to the first corner at a sunny Motegi, only to run wide and cede first spot to Garcia (Autosolar GASGAS Aspar Team). Suzuki got it back at Turn 3 but the man to watch was Guevara, whose GASGAS had been rebuilt after a crash in the Warm Up session when he ran into the rear of John McPhee (Sterilgarda Husqvarna Max). He started back on Row 3 but got away well and was third with an under-brakes move at just Turn 5. Two corners later, he passed Garcia for second, and two corners later again, he overtook Suzuki for the lead!

At the end of Lap 1, Guevara held sway from Garcia, Suzuki, Sasaki, and Foggia, with Jaume Masia (Red Bull KTM Ajo) rounding out the top 10. Garcia dropped to fifth when he ran wide at Turn 1/Turn 2 at the start of the second lap, before Sasaki put a move on fellow Japanese rider Suzuki for second place. The ‘Crazy Boy’ was first when he passed Guevara on Lap 3 at Turn 1, but the Spaniard reclaimed the spot just four corners later. Meanwhile Suzuki had ceded third place to teammate Foggia when he ran wide at Turn 3.

A four-rider battle for the lead

On Lap 4, Sasaki was leading again with a good run off the V Corner (Turn 9) to pass Guevara. The top four were gapping Garcia and he was relegated to sixth when a rising Masia went down his inside on Lap 5 at the Turn 3 left-hander. Both gained a position when Suzuki highsided out of fourth position at Turn 9, his hopes of a home Grand Prix victory on the day after his 25th birthday dashed. Foggia briefly got ahead of Guevara in the battle for second on Lap 8, but the Championship leader reclaimed the place at Turn 5. After nine laps, Masia had all but caught the top three, and stretched his gap over Garcia to a full three seconds.

Guevara reclaimed the lead yet again with an overtake of Sasaki at the V Corner on Lap 10, only to run wide less than a lap later at Turn 5 and hand it back to #71. It was a genuine four-rider fight by the time Masia went by Foggia for third on Lap 13 as they ran down the appropriately named Downhill Straight. Guevara made his move again when he passed Sasaki for first place on Lap 16 at Turn 3, and he got some crucial breathing space when Masia also overtook the Japanese rider on Lap 17 at Turn 5 and made room for Foggia to follow him past.

Guevara wins it as fourth goes down to the wire

However, Masia’s charge was over before the end of that lap when he highsided in dramatic fashion as they snaked through Turn 12 – he looked understandably sore after that spill. Foggia cut Guevara’s mini-break over the course of Lap 18, but could not fashion a move on #28, which was P1 at the chequered flag for the second time in less than seven days once we account for the time difference between Aragon and Motegi. More remarkable still was that he revealed he did so with a bent chassis after his Warm Up crash! Foggia finished 0.593 seconds behind and Sasaki another 1.1148 second back at the finish line.

What became a battle for fourth position was truly thrilling. Garcia came under pressure from Diogo Moreira (MT Helmets – MSI) before McPhee and David Muñoz (BOE Motorsports) joined in the battle. Garcia, Moreira, and Muñoz came to chop and change position regularly at the head of that second battle pack, but Garcia came out on top to finish fourth and minimise the damage in the title race relative to Guevara. Muñoz finished fifth, ahead of Moreira and McPhee, with the top 10 rounded out by Ryusei Yamanaka (MT Helmets – MSI), Andrea Migno (Rivacold Snipers Team), and Riccardo Rossi (SIC58 Squadra Corse).

How the rest finished

It’s a short wait now for the OR Thailand Grand Prix. Catch Round 17 from the Chang International Circuit, on September 30-October 2!