Gradual improvements made by Rykers in Kawasaki debut 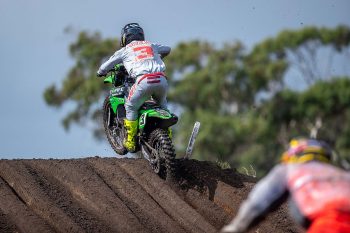 In his first national appearance since signing for Empire Kawasaki to lead the brand’s MX1 program, Jayden Rykers made gradual improvements at Wonthaggi to finish inside the top 10 despite a difficult qualifier.

Rykers was 14th in the session to surprisingly miss out on the first Top 10 Shootout of the season, however, he managed to turn his form around in the motos to eventually claim eighth overall via 7-10 finishes.

“The day started off a little slow for me in qualifying, but I got an awesome start in that first moto, so that was good and from there it was still a challenge for me in selecting the best lines — I found it hard to piece the track together,” Rykers explained. “Still, I finished seventh in that one, which was better, and moto two wasn’t too bad either.

“I had an early crash in that second race, fell back down to around 22nd and fought back to ninth, but went down again on the last lap and crossed the line 10th. It has been a long time since we last raced, so now we’ve had this experience I really look forward to getting to round two in a few weeks and making further progress there.”

There are increased expectations that have been placed upon Rykers for the 2021 season, due to continue his progression in the premier class after making a considerable impact as a privateer in 2019. He signed for Kawasaki last year, that season of which was cancelled altogether as a result of the pandemic.