First win of the year increases MXGP advantage of Gajser

Defending MXGP world champion Tim Gajser claimed his first grand prix overall of the 2020 season to increase his points-lead, as Jago Geerts rebounded for the MX2 win at Mantova 3.

The second moto saw Antonio Cairoli (Red Bull KTM) – who was fifth in moto one – win ahead of Gajser, which was enough for the Honda rider to clinch the overall, and with Jeremy Seewer (Monster Energy Yamaha) third.

Overall it was Gajer who won the MXGP of Europe from Cairoli and Coldenhoff, while in the standings, Gajser now holds a 11-point advantage over Cairoli following 11 rounds.

In MX2, Monster Energy Yamaha’s Geerts bounced back from a couple of difficult rounds to go 2-1 for the overall, trading positions with series leader Tom Vialle (Red Bull KTM) after he went 1-2.

Vialle has a 46-point lead over Geerts in the MX2 World Championship standings entering next Sunday’s MXGP of Spain, which will take place at intu Xanadu – Arroyomolinos.

Of the Australians, Mitch Evans (Team HRC) starred in MXGP with fifth overall via a 4-8 scorecard, while in MX2 Jed Beaton (Rockstar Energy Husqvarna) went 5-5 for sixth overall and Bailey Malkiewicz (Team Honda 114 Motorsports) was 11th. 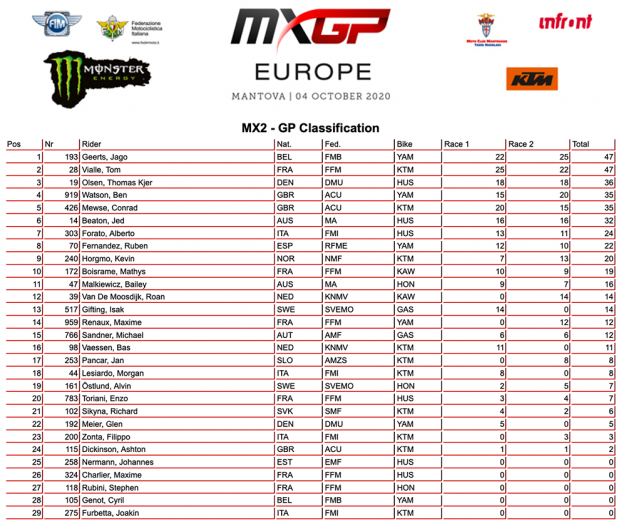