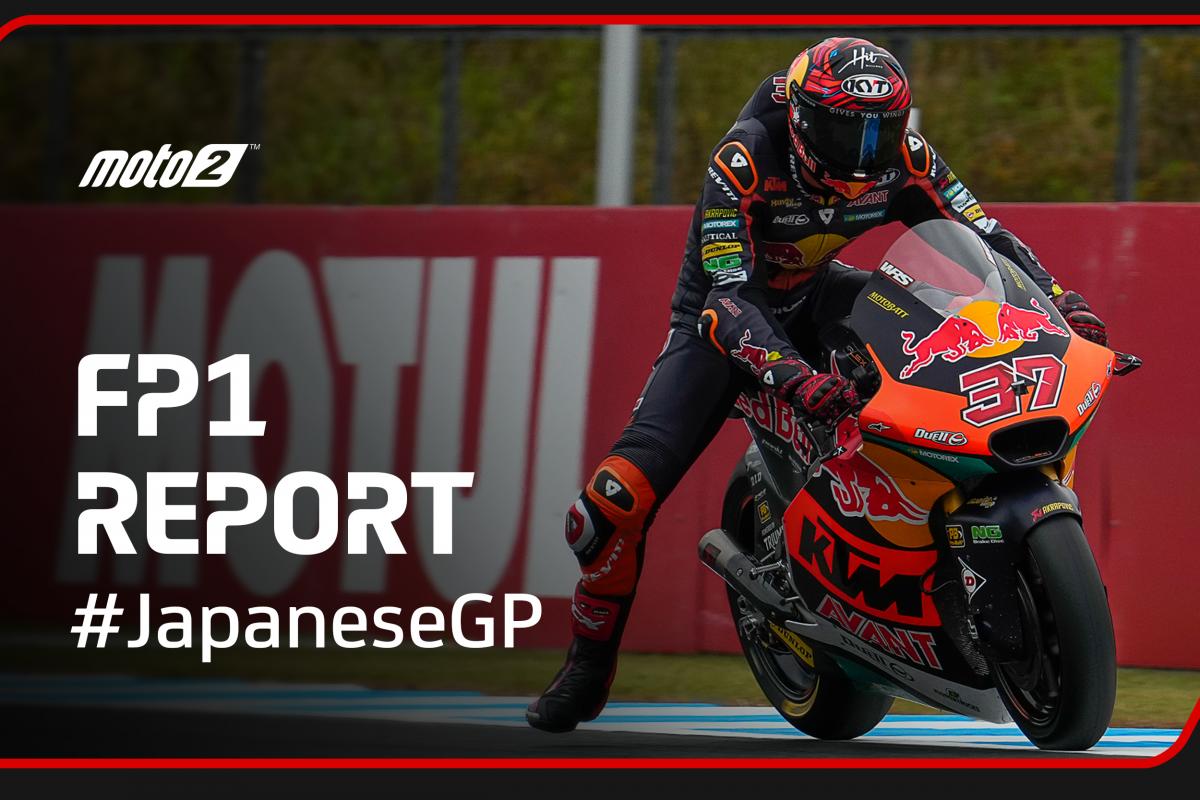 Moto2™ World Championship leader Augusto Fernandez has got his Motul Grand Prix of Japan weekend off to the right start with the fastest lap in FP1. Amid light showers at the Mobility Resort Motegi, Fernandez set a 1:50.493 to finish 0.084 seconds ahead of Somkiat Chantra. Just as first and second was Red Bull KTM Ajo and Idemitsu Honda team Asia respectively, so was third and fourth in the form of Pedro Acosta and Ai Ogura, the latter of whom is a close second in the title race as he starts his home event.

The sole, 40-minute session on Friday at Motegi saw sprinkling rain in the early minutes, when Japanese rider Taiga Hada (Pertamina Mandalika SAG Team) was fastest initially on a 1:55.505. However, the weather would prove to not be too much of a hindrance and lap times quickly began to tumble, with several riders taking turns at the top of the timing monitor. Ogura was first to get into the 1:51s and at one point he and Fernandez had identical fastest lap times of 1:51.296 – a fascinating development considering their closely-fought title battle.

Continuing the theme, Fernandez was first into the 1:50s with less than eight minutes to go, although his 1:50.610 was cancelled for straying beyond track limits so such honours would officially go to Ogura when he broke the beam in a time of 1:50.885. Ogura’s teammate Chantra then set a 1:50.577 before Fernandez hit back with the 1:50.493 which would be the very fastest lap of the session. That was the top two decided and Acosta earned third with a late 1:50.783 to finish the day 0.102 seconds up on Ogura. Filip Salac (Gresini Racing Moto2™) also joined the party with a 1:50.967 before more rain meant the pace dropped again.

Who else is in Q2 at the moment?

Outside of the top 14 and therefore facing a nervous wait to find out whether there will be more rain on Saturday morning are the likes of Aron Canet (Flexbox HP40) in 15th, 0.137 seconds slower than Bendsneyder, and former World Championship leader Celestino Vietti (Mooney VR46 Racing Team) in 21st on a 1:52.573. Sam Lowes (Elf Marc VDS Racing Team) was 26th-fastest on a 1:53.122 on his return from injury.

Canet and Vietti will be hoping that the rain stays away for FP2 given it is their last chance to try and get into Q2. Find out what happens when that session kicks off on Saturday at 09:55 (GMT +9)!