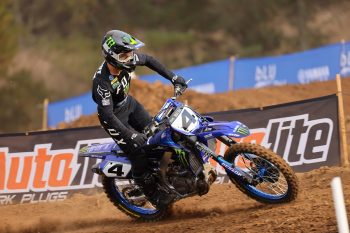 Yamaha racers Luke Clout and Rhys Budd have put themselves in the box seat for the second round of the 2021 Penrite ProMX Championship at Canberra, ACT, after qualifying the fastest in the two premier classes.

Yamalube Yamaha Racing’s Rhys Budd set the pace early in Pirelli MX2 qualifying and was never headed after setting a scorching time of 1:28.968 – the only rider of the field to drop below the 1:30 mark.