Clout and Mellross finish 1-2 at Canberra’s second round. 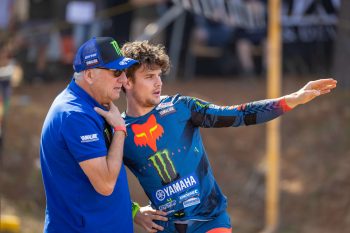 Monster Energy CDR Yamaha duo Luke Clout and Hayden Mellross responded to Craig Dack’s call to ‘stand up’ at round two of the 2021 Penrite ProMX Championship after a self-described average season-opener, the pair delivering with an incredible 1-2 finish.

Round one of ProMX was far from Dack’s expectations last month, where Clout recorded a DNF in moto two as Mellross finished fifth overall – the results prompting the team owner to apply increased pressure last weekend in the ACT.

Dack mentioned the team couldn’t afford to experience ‘another average round’ as it would put them on the back foot in the title hunt, however he was overwhelmingly pleased with how the duo responded to his calls by dominating the podium.

“We needed to put up a fight here as another average round could see us lose touch in the championship chase, so I put it on the team and the riders to stand up this weekend and get racing back on our terms,” Dack explained.

“To the credit of both guys, they did that and now find themselves in a much better position as we head to round three. Both riders can take confidence from their results today and as a team, we will immediately focus on Gillman and look for more of the same.”

Clout’s 1-1-2 scorecard for first overall promoted him to fourth in the championship standings, while Mellross was able to elevate himself to third in the rankings with 4-3-3 results at the Canberra round.