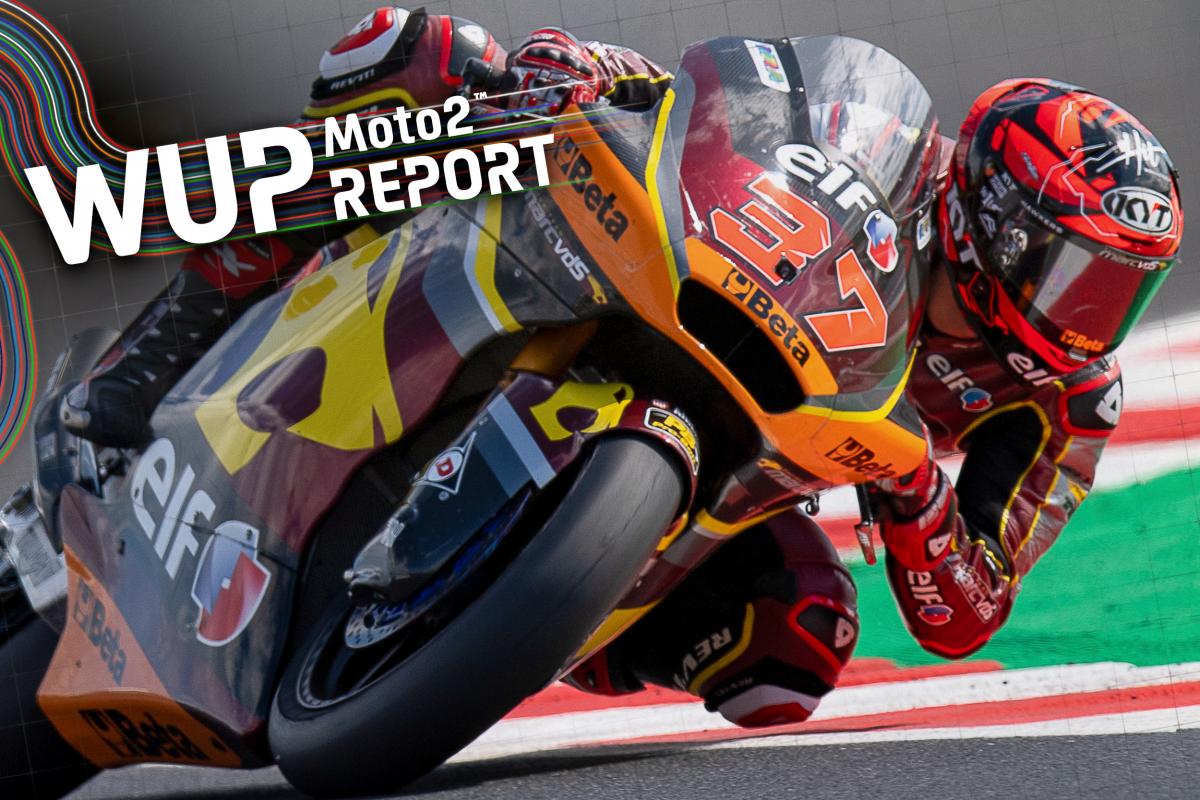 Augusto Fernandez is aiming to end a long victory wait at the scene of his last win in 2019, and the Elf Marc VDS rider got his Sunday off to a perfect start with a 1:36.886 seeing him take P1 in the final session ahead of lights out. Aron Canet (Inde Aspar Team) is 0.127s behind Fernandez, while Championship leader Remy Gardner was third quickest in the morning. 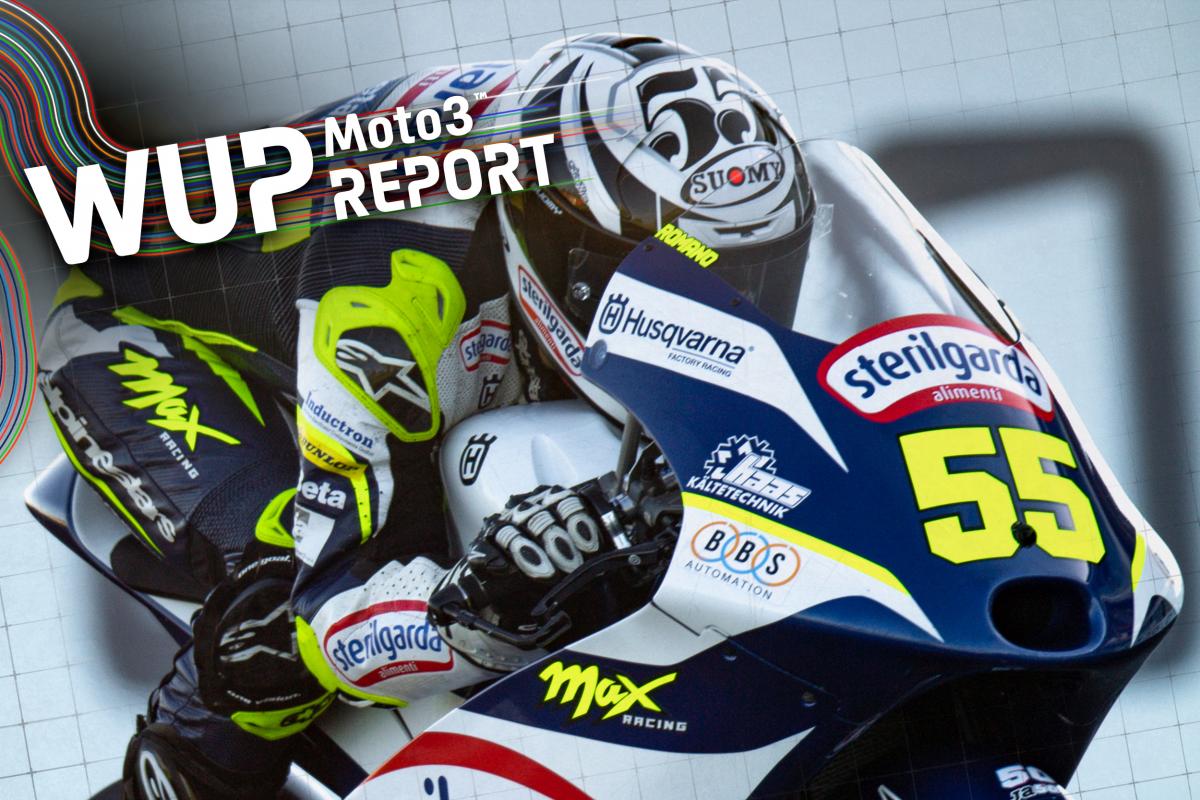 Romano Fenati (Sterilgarda Max Racing Team) ended Moto3™ Warm Up quickest thanks to a 1:41.978 as the Italian leads race rival Dennis Foggia by just 0.038s. Sitting in P3 after the session is Izan Guevara (Gaviota GASGAS Aspar Team) with the rookie rider just over a tenth off the pace, and looking in good form as he hopes to break his podium duck in Misano. 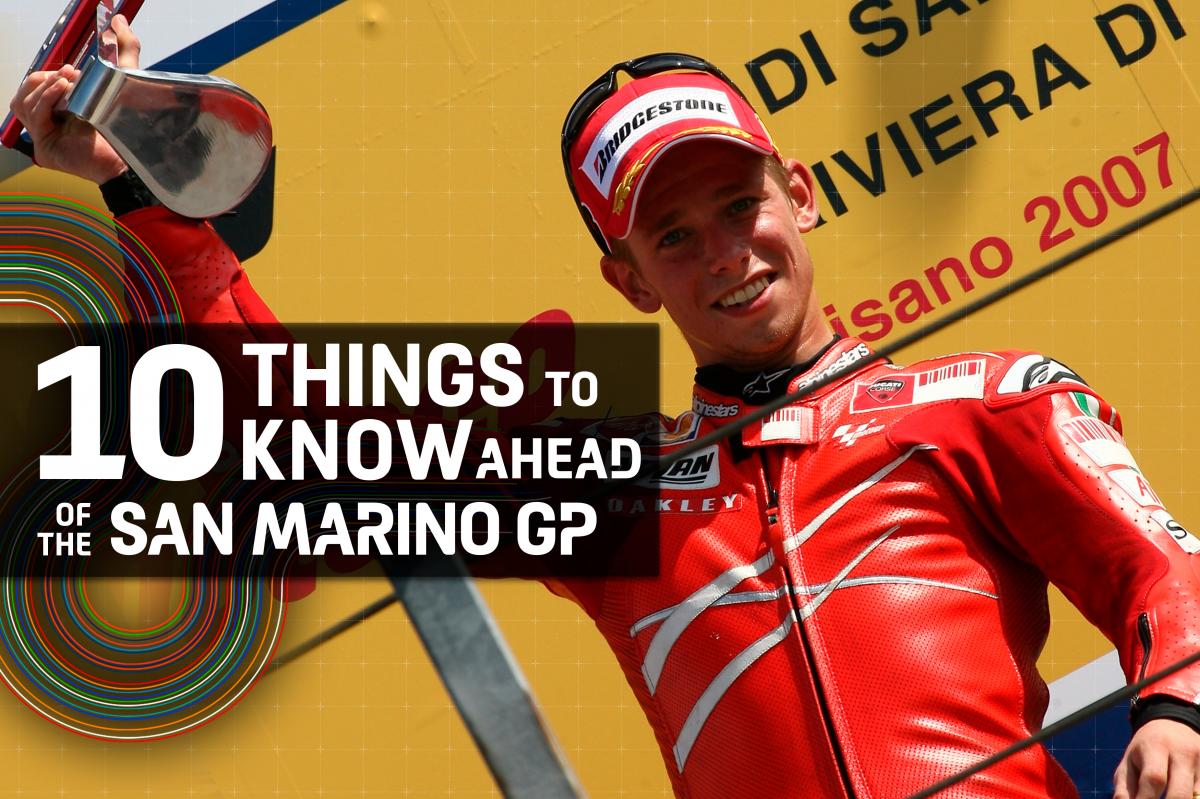 The grid is now set ahead of the Octo Grand Prix of San Marino, and after an exhilarating MotoGP™ qualifying, Francesco Bagnaia (Ducati Lenovo Team) sits on pole and while that is something you would usually celebrate, it comes with a caveat when riding at Misano. Read more about that below as we give you some juicy stats to delve into ahead of lights out on Sunday. 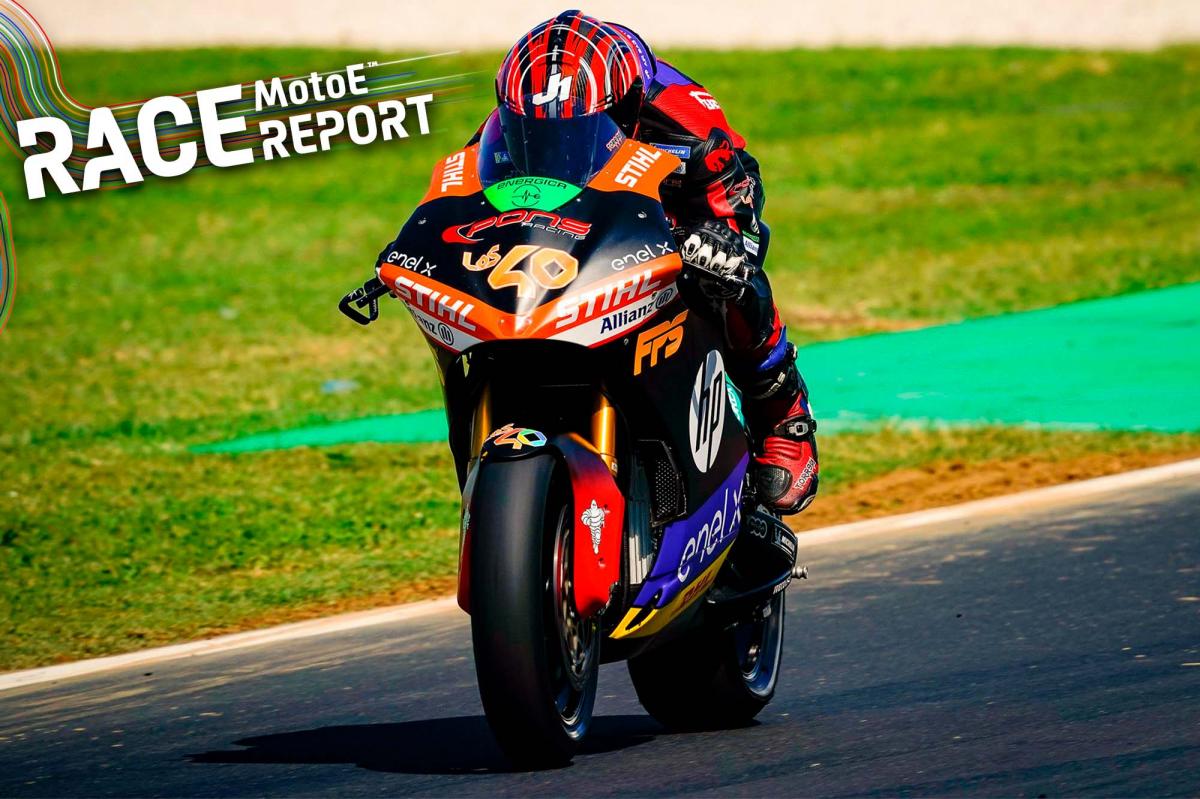 The FIM Enel MotoE™ World Cup riders kicked off their season finale with the first of two races at Misano, both of which are decisive in the title race. The Misano World Circuit Marco Simoncelli saw Jordi Torres (HP Pons 40) take a big step towards glory as he left Dominique Aegerter (Dynavolt Intact GP) and Mattia Casadei (Ongetta SIC58 Squadracorse) in his wake.

Torres made a great start which saw him and Mattia Casadei, Dominique Aegerter and Eric Granado (One Energy Racing) open up a slight advantage of just over a second over Matteo Ferrari (Indonesian E-Racing Gresini MotoE). The four leading riders were the ones to watch all afternoon, as none of them wanted to give up ground in a fight that would goa ll the way to the bitter end. However, disaster struck for Granado in the race finale, the Brazilian crashed out just as he nudged himself in front of Torres.

Zaccone, crash at the most inopportune moment

Alessandro Zaccone (Octo Pramac MotoE) was another of the favourites who lady luck had deserted. The former Cup leader was involved in a messy incident with Hikari Okubo (Avant Ajo MotoE) on the first lap, which resulted in the Italian being stretchered off the track and taken to the medical centre. Zaccone was out of the race, and most likely, out of the running for the title.

How does the MotoE™ standings look?

After the 0 point return for Zaccone and Granado, relegated to third and fourth overall respectively, it is now Torres who leads the standings with one race to go. The Spaniard holds a slender eight point advantage over Aegerter.

One of these 4 riders will be crowned FIM Enel MotoE™ 2021 World Cup Champion tomorrow, who will it be? Don’t miss the second race at Misano on Sunday at 15:30 local time. 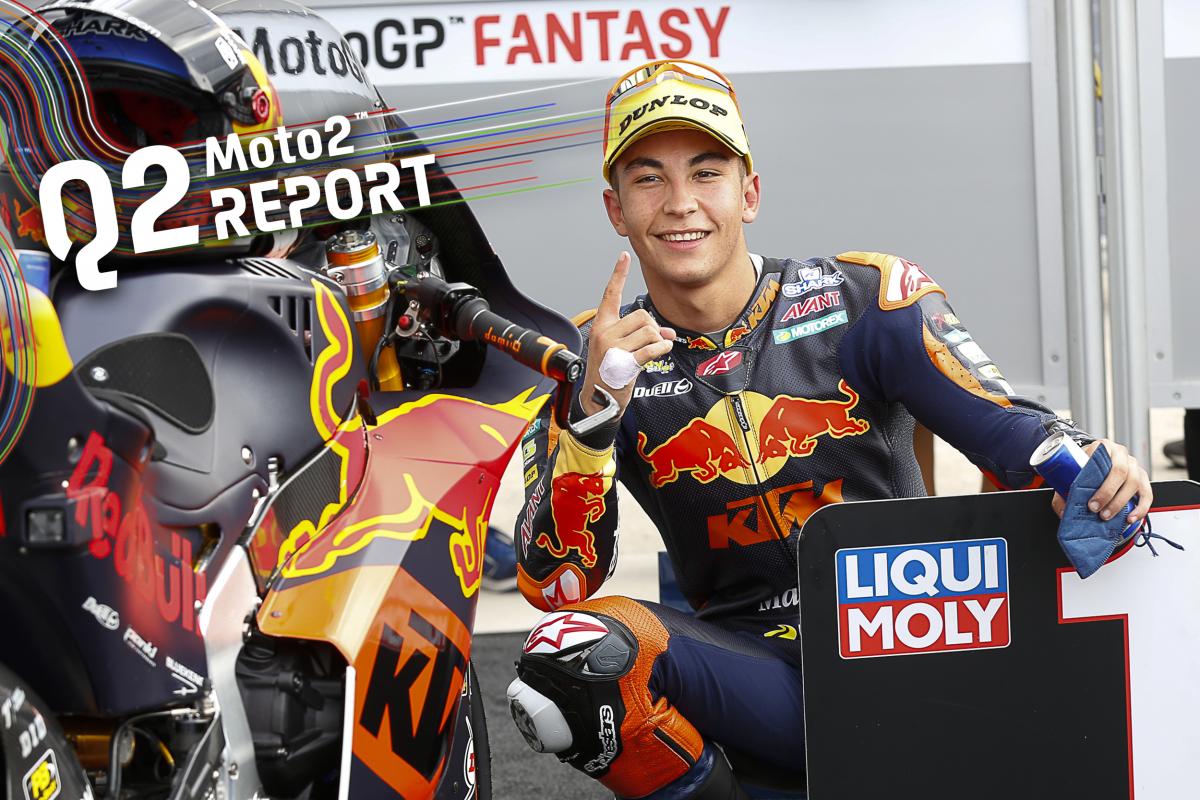 As if we would ever forget, but Raul Fernandez provided a not so gentle reminder of his star quality in Misano by taking Moto2™ pole one week on from a scintillating win in Aragon, and less than two weeks after undergoing surgery in his right hand. The Red Bull KTM Ajo rider’s 1:36.264 saw him have a comfortable 0.351s cushion over Elf Marc VDS Racing duo Sam Lowes and Augusto Fernandez who will join the rookie on the front row.

P1 had changed hands a number of times as the clock ticked down towards zero, Raul Fernandez and KTM Ajo teammate Remy Gardner trading fast laps with Aron Canet (Inde Aspar Team) and Fabio Di Giannantonio (Federal Oil Gresini Moto2), but with four minutes remaining, it was Brit Lowes who had just fired himself to the top of the timesheets as he zeroed in on consecutive poles.

Shortly after, Jorge Navarro (Lightech Speed Up) tried to get in on the front row fun, but his effort was quickly knocked back by Gardner and Canet, with the Spaniard pulling off a brilliant save seconds after recording a personal best time. Then it was Augusto Fernandez’ turn to crash the party, slotting in just behind Lowes to make it a Marc VDS  one-two as riders began to take the chequered flag.

The session wasn’t just over yet, with Raul Fernandez putting together the race’s fastest lap, lighting up the screen with red sectors as he obliterated what was the time to beat, and secured a fifth pole position of the season.

How will the rest of the grid shape up?

Gardner just misses out and will launch from the head of the second row, and the Championship leader will be joined by Canet and Navarro. Di Giannantonio left it late to post a PB lap, but he will line up ninth on the grid behind Xavi Vierge (Petronas Sprinta Racing) and Marco Bezzecchi (SKY Racing Team VR46), while Q1 graduate Lorenzo Dalla Porta (Italtrans Racing Team) completes the top 10.

The intermediate class will see lights out on Saturday at 12:20. Make sure you tune in to catch all the action then. 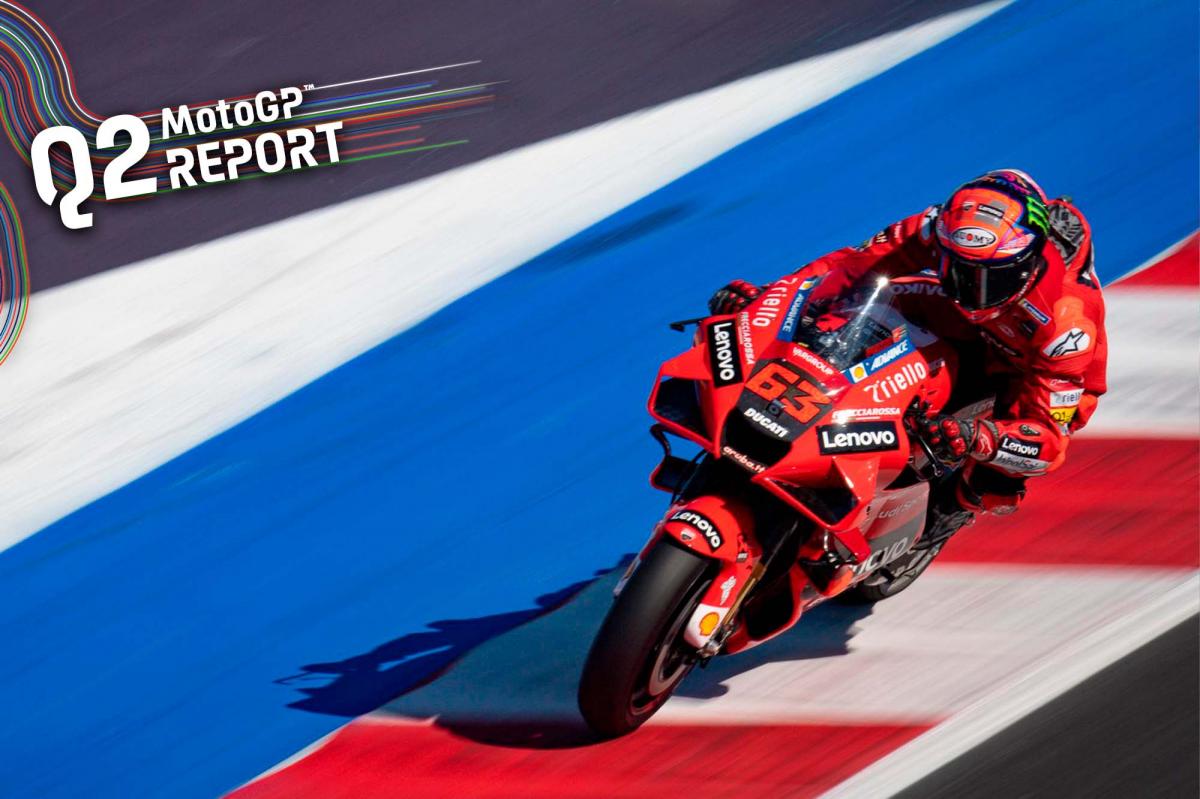 It’s back-to-back P1 starts for Francesco Bagnaia (Ducati Lenovo Team) as the Italian secured his third pole position of the year at the Octo Grand Prix of San Marino thanks to a 1:31.065. The number 63 smashed the previous lap record and leads a Bologna bullets one-two, with teammate Jack Miller some 0.249s behind. There was a collector’s item as Championship leader Fabio Quartararo (Monster Energy Yamaha MotoGP) crashed as he attempted to find some speed to catch Bagnaia, but the Frenchman will still line-up on the front row.

How the battle for pole was won

It was an electric start to Q2, with Quartararo flying out of the blocks to attack pole with vigour, though he wasn’t the only one. Aleix Espargaro (Aprilia Racing Team Gresini) was the first rider to go sub 1:32, but his stint at the top was shortlived as a series of riders got in on the fun, and it eventually culminated in the Championship leader ending the first runs in P1 and just two-tenths off of Maverick Viñales’ (Aprilia Racing Team Gresini) 2020 record.

As the second runs began, the excitement was far from over, with riders really beginning to push in order to find those milimeters that make the world of difference. However, not everyone could handle the heat. First to fall was Marc Marquez (Repsol Honda Team) as he tried to keep pace with a rapid Bagnaia, the eight-time Champion washed the front at Turn 9 while he was soon joined in the gravel by Aleix Espargaro, who hit the deck at Turn 15 as he too looked to up his game.

Quartararo’s lead at the top was a slender one, and he was powerless to resist a scorching effort from poleman Bagnaia, who blasted his way to the top of the timesheets with three-tenths to spare. It didn’t take long for Miller to make his mark, making it a Desmosedici one-two and relegating Quartararo to third. As the Frenchman tried to find a response, he tucked the front end and went down at the Turn 1 right hander, which brought out the yellow flags and signaled the end of the session for a whole host of riders. Fortunately for ‘El Diablo’, nobody was able to put a lap together to threaten his front row start as he held on for a 13th front row start of the season.

Jorge Martin (Pramac Racing) complained of some pains in his right leg but it didn’t stop him from taking P4 just ahead of Johann Zarco (Pramac Racing), who is also riding through injury as all four GP-21s sit inside the top five. Pol Espargaro (Repsol Honda Team) escaped the clutches of the yellow flags from Quartararo’s crash, and his late charge earned him a second row start, while it demoted teammate Marquez to the head of row three.

Aleix Espargaro and Alex Rins (Team Suzuki Ecstar) will line-up alongside the number 93 while Maverick Viñales did an exceedingly good job to take P10 on just his second weekend riding on the RS-GP. The Spaniard finished ahead of Joan Mir (Team Suzuki Ecstar) and Q1 graduate Enea Bastianini (Avintia Esponsorama).

The time for talking is over, with the grid now set for the San Marino Grand Prix, with the premier class seeing lights out at 14:00 local time on Saturday afternoon. You can stay up to date with all the action on motogp.com. 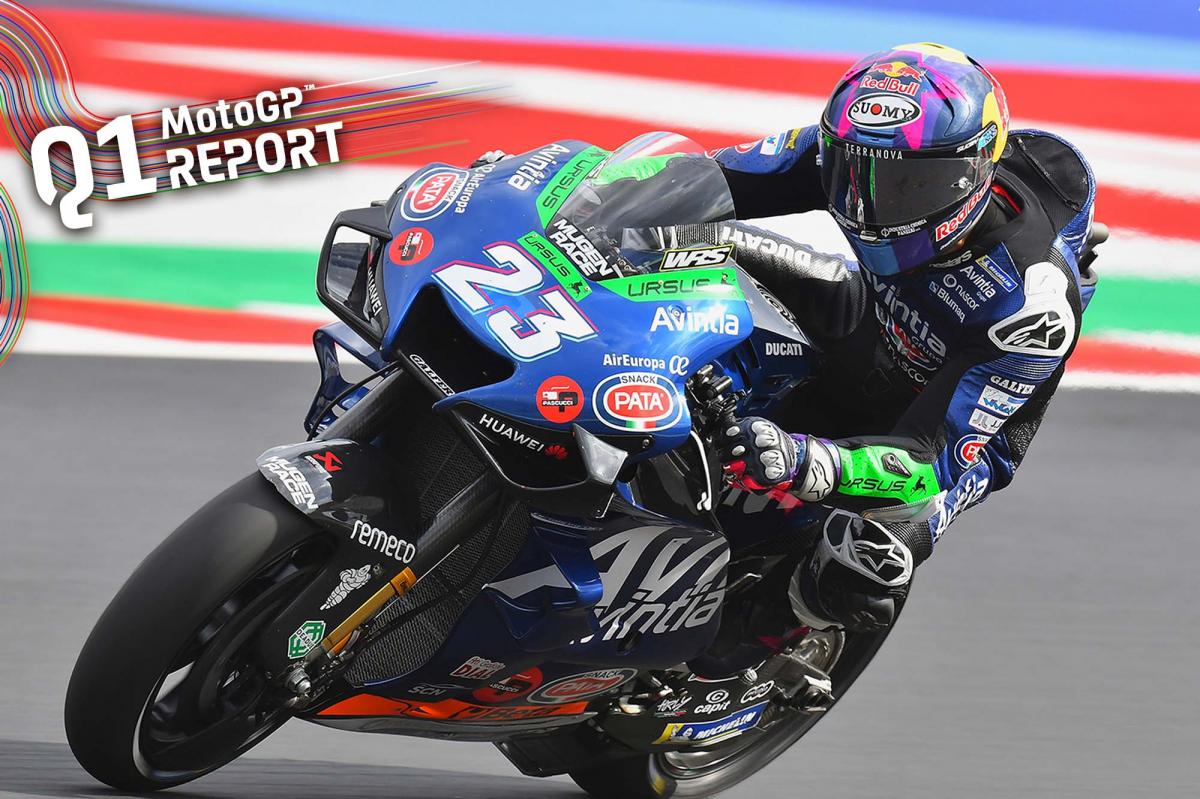 Takaaki Nakagami (LCR Honda Idemitsu) was unfortunate to miss out as a crash cost him dearly while he was on a hot lap and looked to threaten the top two. Hopes that Valentino Rossi would progress dissipated quickly after the Petronas SRT rider hit the deck once again in Misano, and the Doctor will line up 23rd on the grid. It’s not been a good weekend for the KTMs, with Brad Binder (Red Bull KTM Factory Racing) compounding their misery with a late crash.

As riders sought some final tweaks ahead of qualifying, Fabio Quartararo (Monster Energy Yamaha MotoGP) finished FP4 at the Octo Grand Prix of San Marino quickest thanks to a 1:32.197. It means the Championship leader had less than a tenth to spare over an impressive Alex Rins (Team Suzuki Ecstar), with Francesco Bagnaia in P3. 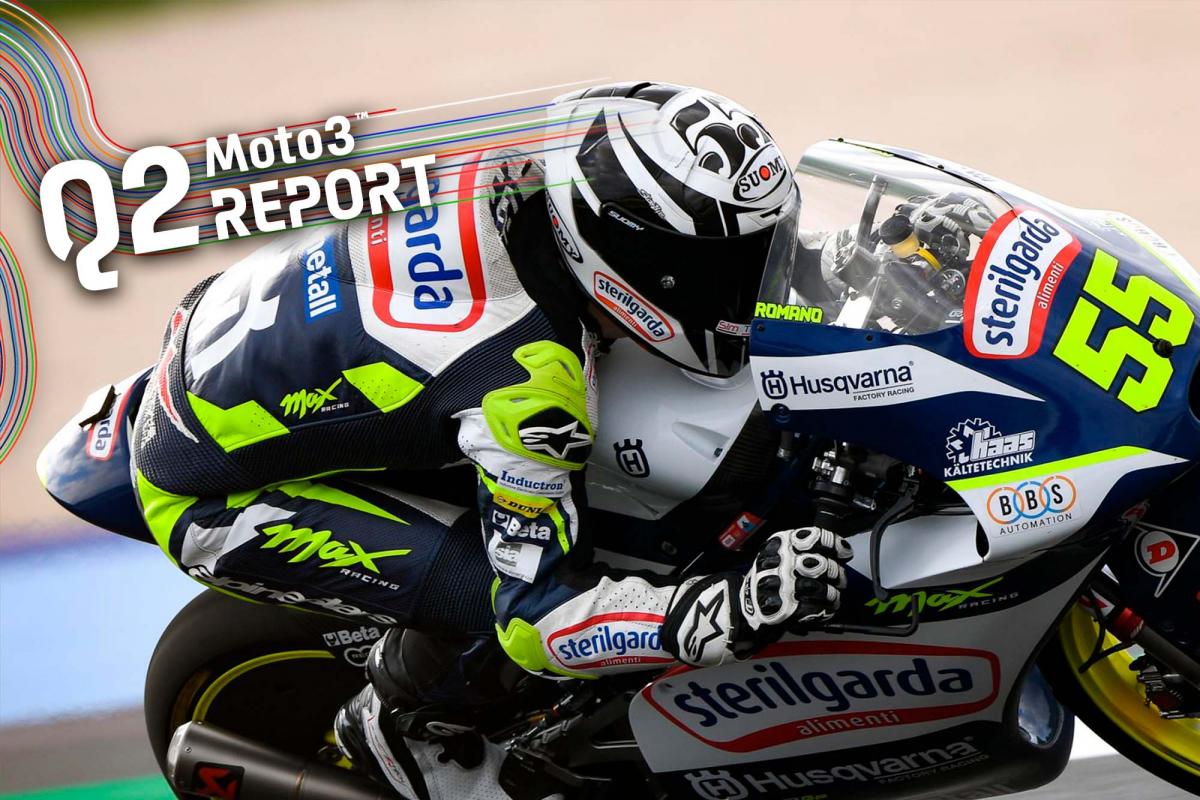 Fenati heads the field from Foggia and Antonelli, with the three likely to push for a breakaway and Migno, at the head of the second row, looking to go with them. Jaume Masia (Red Bull KTM Ajo) took fifth and was only 0.012 off Migno too, finding some good form. Then there’s a slightly bigger gap back to Xavier Artigas (Leopard Racing), with the number 43 bouncing back from Aragon to take top rookie honours on the grid.
Rossi shot forward to line up P7 ahead of Elia Bartolini as the Italian and Sammarinese contingent swarm the grid, with Championship leader Pedro Acosta (Red Bull KTM Ajo) shuffled down to ninth, just 0.009 off the wildcard ahead. Tatay completed the top ten, making good on his move through rom Q1. Acosta’s closest challenger, Sergio Garcia (Gaviota GASGAS Aspar Team), starts P12. It’s advantage Fenati and Foggia so far on home turf, but will that remain true as the lights go out on the Riviera di Rimini? Find out at 11:00 (GMT +2) on Sunday as the lights go out for Moto3™! 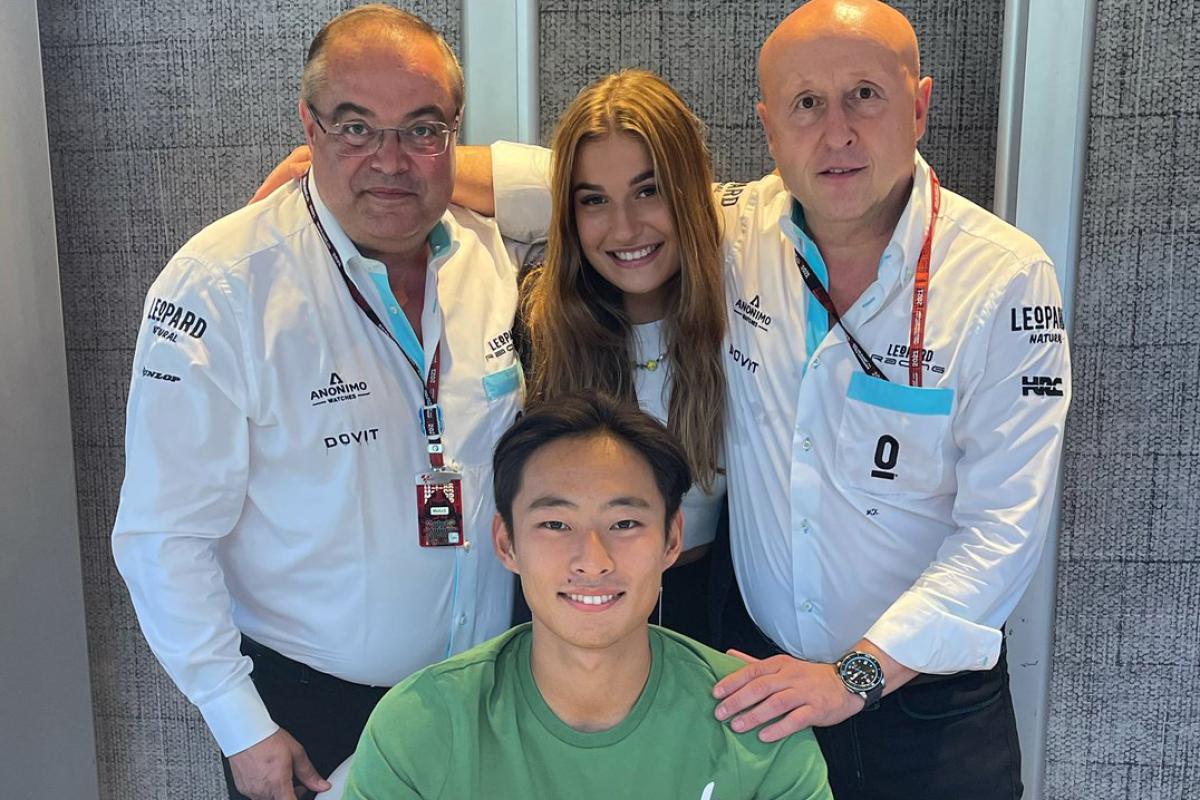 Leopard Racing have confirmed their 2022 Moto3™ line-up, as they have announced that current rider Dennis Foggia and SIC58 Squadra Corse’s Tatsuki Suzuki will ride on their Honda machine next season. Italian Foggia currently sits third in the lightweight class Championship standings thanks to picking up three wins and three further podiums so far this season, and will be considered among the title favourites next season.