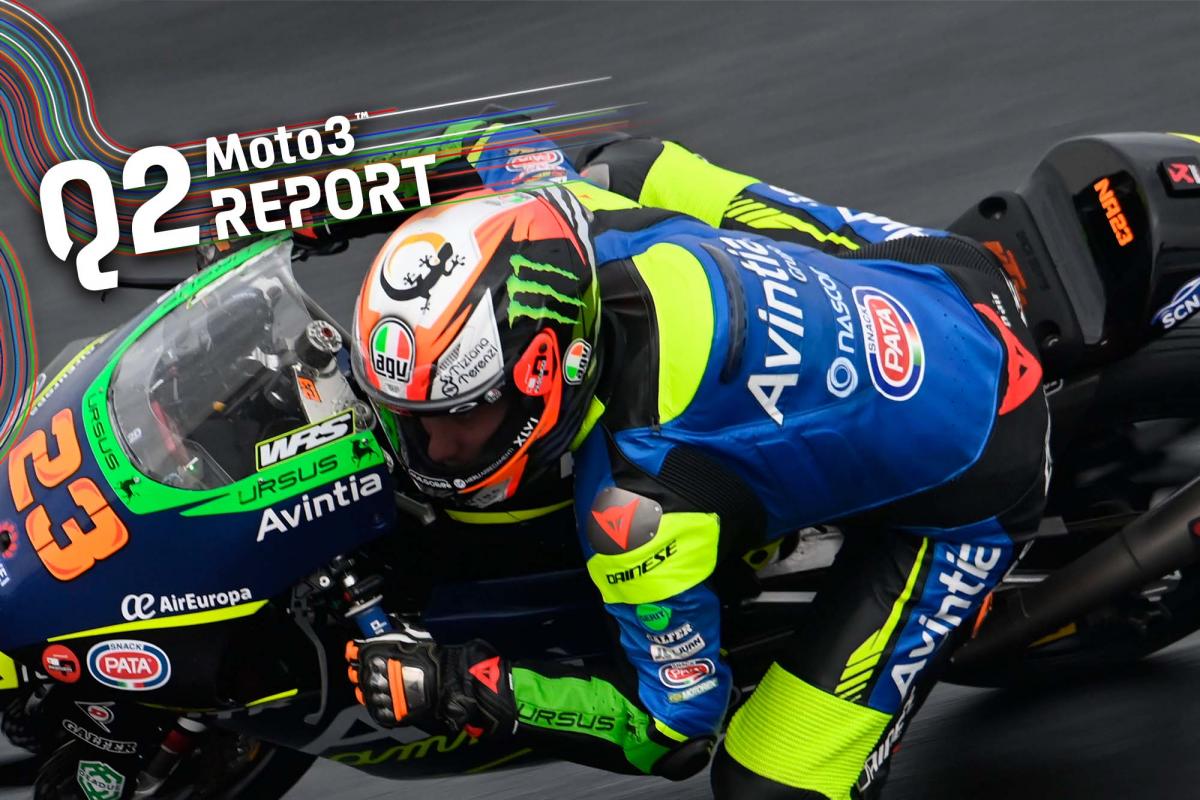 The Italian comes through Q1 to claim P1 in qualifying with title leader Acosta on Row 2; Foggia will start from Row 5

As Saturday afternoons go, that was about as good as it gets for Niccolo Antonelli (Avintia VR46 Academy). The Italian came through Q1 to dominate Moto3™ Q2 at the Gran Premio Nolan del Made in Italy e dell’Emilia-Romagna to earn his first pole position since the 2019 Japanese GP with a 1:48.563, a time 0.611s quicker than second place Filip Salač (CarXpert PrüstelGP). Ricciardo Rossi (BOE Owlride) – using a rear slick tyre – completes the front row for Sunday’s race as World Championship leader Pedro Acosta (Red Bull KTM Ajo) lines up P5 – but Dennis Foggia (Leopard Racing) struggles.

Job done for Acosta, work to do for Foggia on Sunday

After coming through Q1 with a 1.2s advantage, the Italian was straight down to business in the pole position battle and halfway through Q2, on a damp but drying Misano World Circuit Marco Simoncelli surface, Antonelli was 1.3s faster than Ayumu Sasaki (Red Bull KTM Tech3) – the Japanese rider crashing unhurt at Turn 14 with six minutes to go. Salač then went P2 to cut Antonelli’s gap down to 0.8s, but the latter almost immediately extended his lead to 1.5s. Sensational from the VR46 Academy rider.

With three minutes to go, Foggia was P18 and last in the session. Meanwhile, Acosta shot up to P3, with Foggia’s sixth flying lap seeing him 3.2s off Antonelli. On his next lap, Foggia climbed to P16, with plenty of personal best times being landed. Acosta briefly occupied P3 but he was shuffled down to P5 at the chequered flag, as rival Foggia could only manage P14 – work to do on Sunday morning for the Italian.

COTA winner Izan Guevara (Gaviota GASGAS Aspar Team) will spearhead the second row of the grid and has former Junior World Championship rival Acosta alongside him, with Jaume Masia (Red Bull KTM Ajo) making it out of Q1 to start next to teammate Acosta in P6. Alberto Surra (Rivacold Snipers Team) – the newest member of the VR46 Academy – has been impressive all weekend and continued to show great speed in qualifying to claim P7, Stefano Nepa (BOE Owlride) and Xavier Artigas (Leopard Racing) sit P8 and P9 on the grid. Sasaki slipped down to P10 after his tumble.

Acosta vs Foggia. The World Championship leader holds the points advantage, now he has grid position advantage too. With the weather looking set to be dry, can Foggia fight his way through from P14 to stop Acosta from winning the title at Misano? Tune into the Moto3™ race at 11:00 local time (GMT+2) to find out.