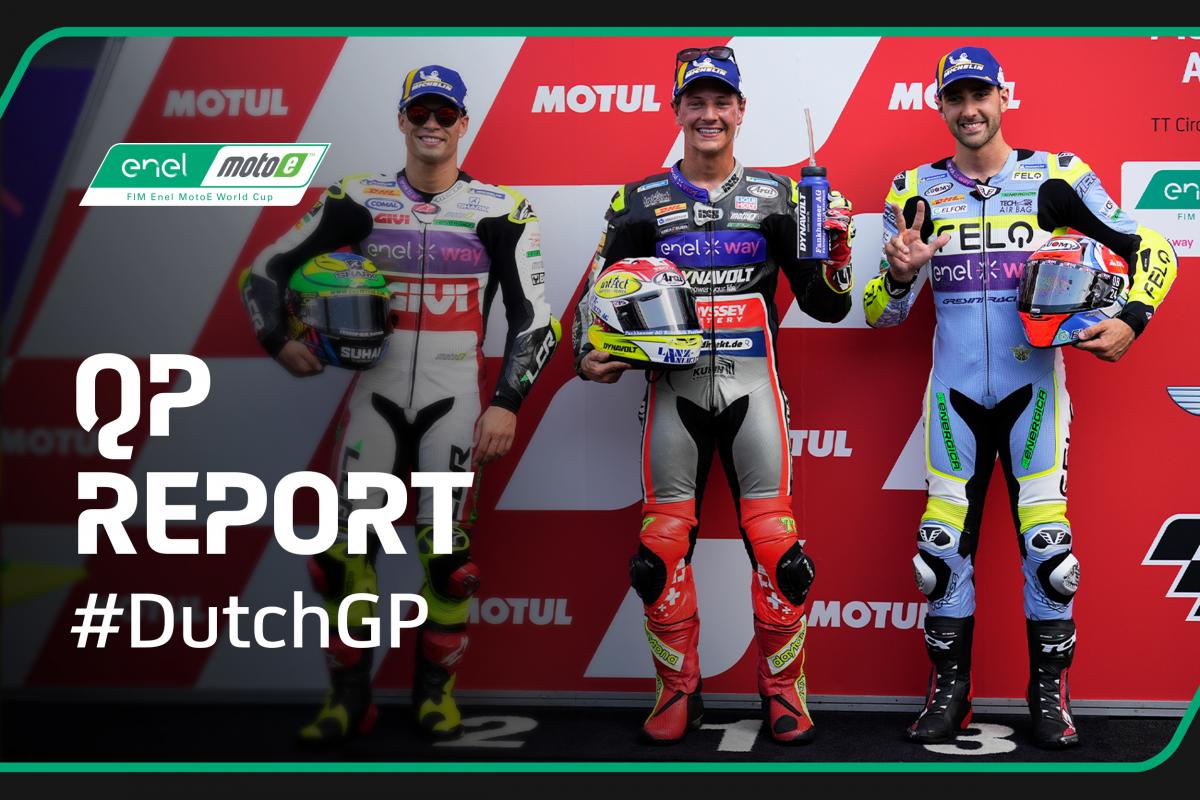 The FIM Enel MotoE™ World Cup is back in action this weekend at the Motul TT Assen and it’s shaping up as a titanic title contest if qualifying is anything to go by. The top three in the standings will share the front row for both races at the TT Circuit Assen, although it is World Cup leader Dominique Aegerter (Dynavolt Intact GP MotoE™) who once again has the edge over his rivals. The Swiss rider came from Q1 to claim pole position for Round 4 with a lap time of 1:43.643, ahead of Eric Granado (LCR E-Team) and Matteo Ferrari (Felo Gresini MotoE™).

The weather conditions in Assen created the high-pressure scenario whereby the MotoE™ riders would not turn a lap on a dry track until they started qualifying. FP1 was a wet session and FP2 was cancelled due to the conditions, but the rain had long cleared by the time Q1 started.

The eight riders who went directly into Q2, of course, still faced that challenge but Aegerter did not by then. He had finished 12th in FP1 but safely cleared the first stanza of qualifying and therefore had something of an advantage in terms of track familiarisation by the time the fight for pole was on. Still, Granado and Ferrari were not going to let Aegerter have it all his own way, and they traded fastest laps for much of Q2.

Aegerter went to the top for the first time with just seconds remaining before the chequered flag, beating Granado’s 1:43.749 by 0.106 seconds, and that would prove the decisive moment in the battle for pole. Ferrari improved on his final lap, to a 1:44.047, and while that effort did not yield a better position, it would ensure that he kept his front row berth.

How the rest of the top 10 looks

Otherwise, the Italian would have been bettered by compatriot Mattia Casadei (Pons Racing 40), who set a 1:44.074 with the chequered flag out which moved him up to fourth and shifted Miquel Pons (LCR E-Team) to the middle of the second row. That top five was covered by 0.475 seconds while Niccolo Canepa (WithU GRT RNF MotoE™ Team) makes the top six a perfect match for the World Cup standings, albeit at 1.361 seconds slower than Aegerter.

Rounding out the top 10 are Q1 graduate Hector Garzo (Tech3 E-Racing), Bradley Smith (WithU GRT RNF MotoE™ Team), Marc Alcoba (Openbank Aspar Team), and Xavi Fores (Octo Pramac MotoE™). Smith is making a belated start to his MotoE™ season this weekend, after injury sidelined him for the first three rounds of 2022, but got through to Q2 directly.

There are no injury worries for Hikari Okubo (Avant Ajo MotoE™) despite a highside at the Geert Timmer Chicane. At seventh in the World Cup standings, he was the highest-ranked rider to not get into Q2, having crashed on his out lap in Q1. Experiencing leg pain, the Japanese rider went to the medical centre for a check-up and has been declared fit, but will start from the back of the grid given he failed to set a lap time in qualifying.

After two Grand Prix weekends off, the MotoE™ riders will be raring to go for Race 1 at Assen. Catch all the electrifying action from 16:15 (GMT +2) on Saturday afternoon!.